Campbell and Griffith smashed hundreds as West Indies cruised to 276 for no loss on the opening day. Then came the fightback 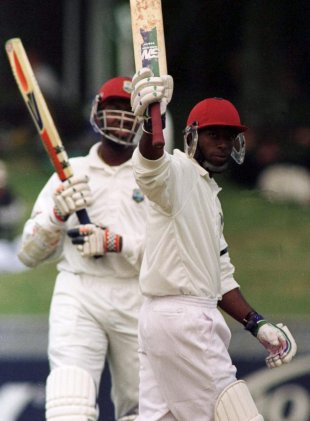 Adrian Griffith: "I just made sure I rotated the strike. Then, at times, I'd take the attacking route" Ross Setford / © Getty Images

The early signs this time around pointed to something similar. Sherwin Campbell and Adrian Griffith reached 276 for no loss on the opening day in Hamilton. However, over the following days the match flipped on its head in one of New Zealand's most impressive turnarounds.

Dion Nash: I don't think we bowled that badly, I just remember we didn't have any luck, whatsoever. Sherwin Campbell batted really well. He was hard to bowl to.

Craig McMillan: There's always a bit of luck involved. Campbell was a short man, he was very good off the back foot and we bowled too short to him that day. He was hitting the ball off the back foot over the slips a lot.

Adrian Griffith: All we set out to do was lay a good foundation. We'd batted many times together before for Barbados through the years. We knew each other pretty well. It worked out very well on that first day. Sherwin was more attacking, and I just made sure I rotated the strike. Then, at times, I'd take the attacking route.

Moments before the close, when it appeared West Indies would become just the fourth team to bat through an entire opening day without losing a wicket, Nash made the breakthrough when he removed Campbell for 170. But Griffith remained unbeaten with his maiden Test hundred.

Nash From memory, it was a bad ball and a bad shot. But we made that little bit of momentum count. We were pretty determined to prove ourselves against West Indies. It was a side with all the big names, especially in the bowling. It was a good side, and we were a Kiwi side who wanted to win on our home soil.

Griffith My first Test was back in 1997, then I had a hiatus before coming back in 1999 against Australia. I'd got a fifty in the last Test and I started to grow in confidence. I thought, "Adrian you do belong", and I tried to build on that in New Zealand. I knew it could be my final chance. I was pretty confident. I didn't have many runs going into the Test match but felt okay when it started. It's the stuff that you dream of. There was a bit of relief. No one can take the hundred off you.

On the second day, New Zealand made regular inroads and West Indies crumbled to 365 all out.

Nash One of things we'd developed at the time was, at the end of each day we would sit down to assess where we were at and plan the route forward. I can't remember exactly what was said, but I imagine it was something like, if we can keep them under 400 we'll have done pretty well. We'd broken the big stand and had to bowl maidens to build up the pressure. We knew West Indies liked to score freely. At 290 for 1, a lesser team would have felt like they were out of it and then come in and tried too hard. We stuck to our guns and chipped them out. Things can turn around very quickly.

McMillan They lost 9 for 80, which was quite remarkable. That's the thing I always found fascinating about Test cricket - there are no two days that are the same. It was a cracker of a pitch as well, with pace and bounce. Cairns and Nash took a bag of wickets and they keeled over pretty quickly. Before we knew it, we were having a bat, which we didn't expect to do quite quickly after that first day.

"Generally 50s and 60s don't win you Test matches, but it was one of those occasions where enough of us chipped in" Dion Nash

Griffith If you have a start like that you expect to amass a big total. Unfortunately that didn't happen, but at that stage we didn't think the game had gone away from us. It meant we had to work harder with the ball. We'd let a great chance slip, but still felt if we bowled well we would put pressure on them. There were no thoughts in my head at that stage that the game had gone. We needed to be more aware of the situation, not relax. We made that mistake. New Zealand got one wicket in the day and we were in complete control. We should have pounded them. But they came out very hard.

The key moment of the New Zealand innings, and perhaps the match, came when Chris Cairns was run out first ball but the third umpire couldn't give the decision because his view was obscured.

Nash We were disappointed, in the end, to not get a bigger lead. Although, on the other hand, we may have trailed by quite a lot if Chris had been given run-out first ball.

McMillan I was batting with him at the time. The thing about Chris was, he needed to get off the mark straightaway. It didn't matter where the ball went. He was running. I was halfway down. It was a direct hit by Chanderpaul, and he was out by a frame, but the umpire was in the way and they couldn't quite see when the bail was dislodged. I remember Viv Richards watching it in the dressing room wasn't happy. I think the door got a severe pounding that day.

In New Zealand's reply, the top eight all reached double figures, but no one went past Cairns' 72, and the lead finished at just 28. He and McMillan added the defining stand of 116 for the seventh wicket.

McMillan There were no massive scores, but everyone chipped in. I worked hard for a fifty. We had opportunities to get more runs than we did. Guys got to 50 and didn't kick on, but in all honesty, after day one, having any lead was quite a positive thing for us and it kicked on into the second innings. Lower-order batting was one of our key strengths from about 1997 to 2004. At times we were in trouble but that middle and lower order would bail us out.

Nash Generally 50s and 60s don't win you Test matches, but it was one of those occasions where enough of us chipped in. To have any lead on first innings after day one, we were pretty happy with that.

Although the match appeared to remain very even after the first innings, that changed on the fourth morning as West Indies' top order fell apart for 1 for 3. Griffith It was a total contrast to the first day. All of a sudden we were three down. I was just trying to stop the rot. I had to try and hang in. Unfortunately it never quite happened. Although I stayed for nearly three hours, we never built much of a partnership. We actually became a bit stuck. The scoreboard didn't really go anywhere, so when wickets fell in a hurry the lead wasn't significant.

Nash It was one of those occasions where the third innings of the match was vital. We knew if we could put some pressure on them they may crumble. Too often I was on the receiving end of such a situation so it was nice to repay the favour. The key in a Test match is to not get too far behind, keep in touch, which is what we did after that first day. They probably thought they should have scored 550, then they end up behind. So, at the start of that third innings, they are ruing that we are still in the match. Once you get Brian Lara out you always felt in the match. From memory it might have been a slower ball - certainly a nice scalp to get.

McMillan We got on a bit of a roll and you felt like West Indies didn't have a reply. Cairns was bowling his slower deliveries perfectly. He had a couple of Tests around that time where they worked like a dream. They probably didn't show the stomach they needed to in the second innings after the disappointment of not getting a massive first-innings score.

West Indies were skittled for 97, leaving New Zealand a target of 70, which they knocked off with ease to take a series lead.

McMillan It was a unique game, from my point of view. There weren't many occasions when we were carved up on day one and came back to win by nine wickets. The result says it was a pretty dominating display by us, but if you look at the scorecard after day one, it was far from that. There was a lot of belief in our side and a lot of that came from Steve Rixon, our coach, who still had that Australian mentality. I was a young player. A lot of us bought into his mindset. It was a golden period for a couple of years.

Griffith It all happened very quickly in the end. You can't really enjoy personal success in a situation like that. It was a bittersweet few days.

Nash It was a pretty special win considering where we were after the first day. As a group of players we'd been together for quite a while and 1999 was when we came of age. It was one of those periods where you can look back and think, "Yeah, we got it together".