'I didn't ever break a finger, but now they're a bit crooked'

Bob Taylor, who spent many years as an understudy to Alan Knott, talks about finally getting his chance, stumping Miandad, and keeping at Lord's aged 45 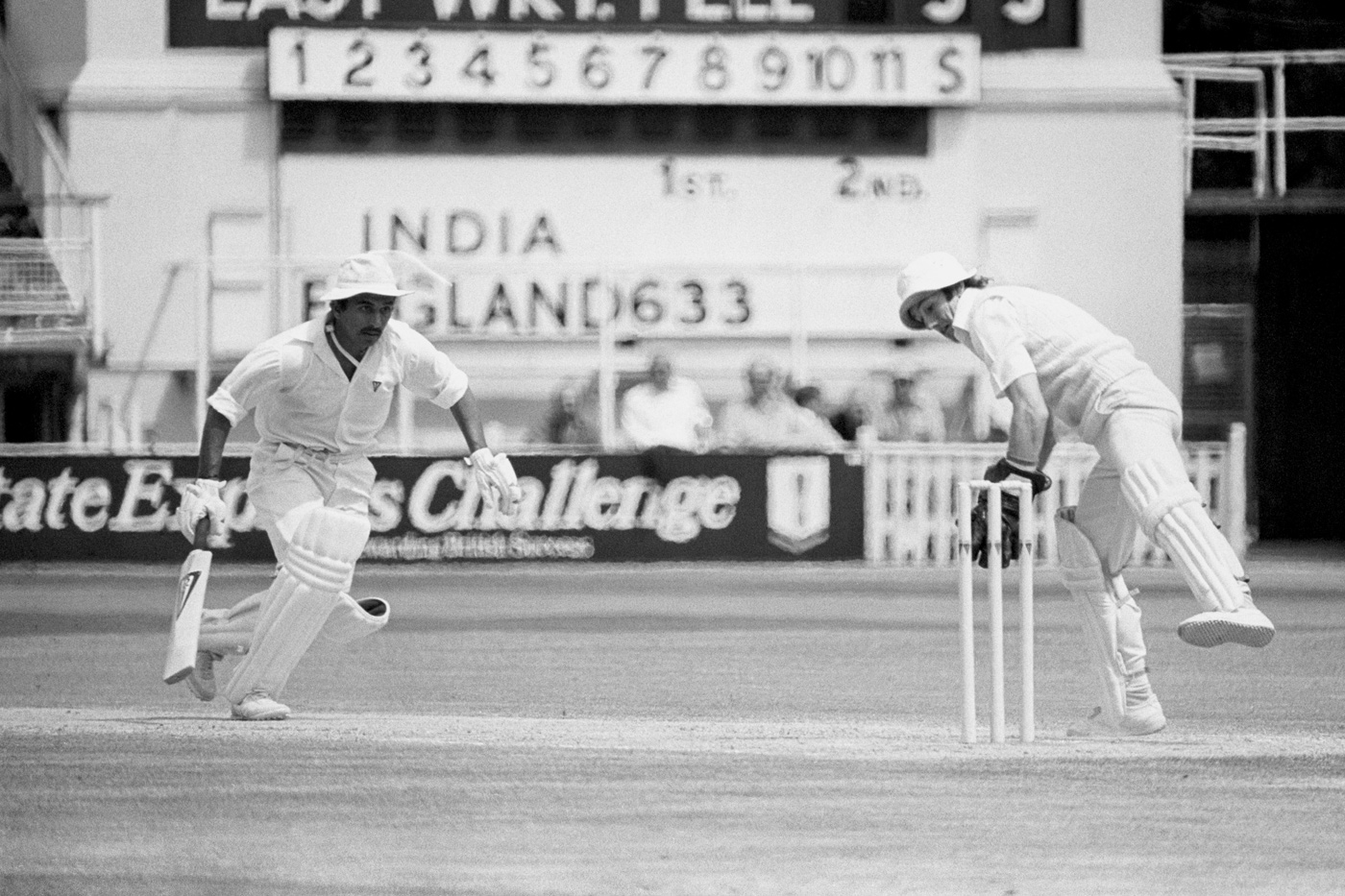 Bob Taylor: "If I wasn't keeping wicket very well then I'd lose sleep over it" © PA Photos

The two people I owe a debt of gratitude to for playing for England 56 more times and not being a one-cap wonder were Ian Botham and Kerry Packer. Packer because he took Alan Knott away, and Ian because he was a genuine allrounder who won matches with the bat and the ball, which meant the selectors could afford to play me as a pure wicketkeeper.

I never lost sleep if I wasn't getting runs. That didn't mean I wasn't trying, but if I wasn't keeping wicket very well then I'd lose sleep over it.

I was at Old Trafford in 1956 when Jim Laker got his 19 wickets against Australia. Our old cricket master took three of us and got some old car rugs for us to sit on outside the boundary. Neil Harvey got a pair. He tried to play Laker to silly mid-on, against the spin, but got caught by Colin Cowdrey and, in disgust with himself, threw his bat in the air and caught it. I always remember that.

I started playing at school. We used to play on a black cinder car park near the old Stoke City football ground with three stumps and a block of wood. This was just after the war, money wasn't plentiful, and batsmen used to bat with one pad on their front leg because we couldn't afford two pairs.

I'd always got confidence in my ability. It's just that there was someone else who was better than me.

One of my best Test match stumpings wasn't actually given out. It was in Karachi or Lahore. John Lever was bowling, Javed Miandad came in, and we were batting last. Off the second ball, Javed came out of his crease and dug it out and the ball skewed out toward mid-off. He finished up on a length and we all saw him pivot in his spikes - they'd got Abdul Qadir then - to rough the pitch up on a spot. He got away with it, so I said to John and the captain, "I'm going up to stop him from doing this." The fifth ball, John bowled this swinging half-volley down leg side. Javed played the walking shot. I went down the leg side and - a wicketkeeper's dream - took it all in one movement. I got the bails off, Javed was out of his crease, and the umpire - the infamous Shakoor Rana - was looking up in the stand. He hadn't got his eye on the game! "Very sorry," he said. "Not out." Ludicrous.

One day the opposition's schoolmaster asked me to go and play for his club. My schoolmaster overheard this and said, "No, he's coming with me." Little did I know he was secretary of Bignall End, Jack Ikin's home cricket club.

I didn't ever break a finger, but if you saw them now they're a bit crooked. That's wear and tear.

I made my Derbyshire debut against Sussex at Derby. I remember it very clearly. The previous day I was playing for Derbyshire 2nds against Repton School, whose opening batsman was Richard Hutton. At tea time, our coach has a phone call from Old Trafford to say that George Dawkes, the first-team wicketkeeper, had broken down and wouldn't be fit the following day. So he says, "Get yourself together, you're making your debut tomorrow." I thought, "Fantastic!" I played for the rest of the 1961 season.

"I started to go grey at the front. I got the nickname 'Pinto'. I didn't know what a pinto was. Apparently, it's a black horse with a grey mane"

When I got my highest Test score, 97 in Adelaide, it was over 100 degrees every day. In the end, I'd been in that long, I was a bit knackered and knew I'd nicked it down the leg side, so off I went. But there was only a stifled appeal from behind the wicket. To add insult to injury, the umpire, Max O'Connell, came into the dressing room at close of play and said, "Thanks for walking, Bob. I wouldn't have given you out."

I'm not particularly interested in limited-overs cricket. I have no desire to watch it. I get bored.

I looked out and saw the odds on the new scoreboard: England 500-1, Australia 2-7. I said to Gatt, "Do you want to have a bet on that? We're betting for ourselves. If you lose it's only a couple of quid; if we win, it's £1000." He said no and carried on stuffing his face, so I said, "Well, I'm going to put a bet on." But there was a crowd of Yorkshire kids wanting autographs, and if you don't oblige they call you "bighead". So I'm signing these autographs and I knew I couldn't get across to the Ladbroke's marquee and back again in time to put my pads on. It wasn't until the following day when Dennis Lillee got out and they were eight down that I thought: "Sod it, I could have won £1000!" That's the first time I thought we were going to win.

Ian Botham hit the gloves as hard as anyone.

My schoolboy hero was Godfrey Evans. But soon after I turned pro we played against Northants, who also had an England wicketkeeper, Keith Andrew, and he became my hero. He used to make it look so easy. No fuss and no bother.

For one of my first representative matches I was picked to play for MCC against the Australians at Lord's. At one point, there looked like being a run-out chance on: a throw was coming in from the boundary and Bill Lawry was running towards me, but he just kept running and knocked me flying. Whether he did it on purpose or took his eye off the ball, I don't know. The following day in a league game, in one over, Roy Fredericks nicked the ball three times off Ian Buxton and I proceeded to drop the ball three times. I thought I had made it, so that was a great leveller. It stayed with me.

Knotty was nutty as a fruitcake.

I got a hundred against Yorkshire at Sheffield - the only first-class hundred I got. It was nice to see one-zero-zero when I came off, but then it crossed my mind that the scoreboard might be wrong. It might be 99. So I said to our 12th man, John Morris, "Would you mind going round to the scorer and making sure?"

I gave Devon Malcolm his reference for his British passport. I told them I thought he'd play for England one day.

When I started playing regularly for Staffordshire, I was working for the Electricity Board on an apprenticeship. I used my two weeks' paid holiday to play Minor Counties cricket, and I was fortunate that the boss gave me time off to play more. He could have said no and I might not have got going.

I first played for Staffordshire when I was 16, with David Steele. We were both black-haired schoolboys then. We used to go for practice at Longton Cricket Club, quite an affluent club, but we used to go there and back together across the Potteries on the PMT buses: Potteries Motor Traction.

I started to go grey at the front. I got the nickname "Pinto". I didn't know what a pinto was. Apparently it's a black horse with a grey mane. 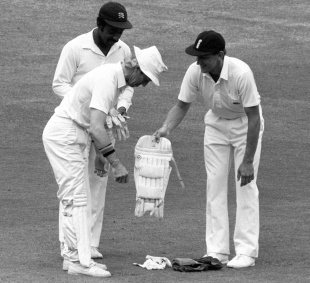 In 1960, I played for the Minor Counties XI against the South Africans. Jack [Ikin] was captain, and I suppose he had an influence in my selection. You have to be in the right place at the right time and have a bit of luck.

At the start of the following season, George [Dawkes] was ready to resume his duties but crashed his car into the back of a lorry, smashed his knee and never played for Derbyshire again.

It takes ability to keep to someone like Shane Warne, but to me that's easier than keeping on the subcontinent on flat wickets against good batsmen, when you're basically redundant.

The New Zealand game at Lord's was one of my first matches looking after the corporate hospitality marquee for Cornhill. I hadn't watched much of the cricket but I knew Bruce French had been hit by Richard Hadlee. I sat down at lunch with my half-glass of red wine when the curator at the indoor school came over and said Mike Gatting wanted me on the phone. The penny didn't drop at all. Then Gatt asked me to keep wicket, so I had to dash across to the dressing room. I gave the curator my car keys and asked him to go across to the hotel opposite and get my wicketkeeping pads and gloves - I was playing one or two Lord's Taverners matches at the time - and the tennis shoes I always used to wear. I gathered various garments - Goochie's jockstrap, which was new out of the box, Bruce French's shirt and flannels, as he was the only one my size - and, of course, they couldn't stop the clock, so Bill Athey had to keep wicket for a few overs before I went out. It was a strange feeling, because I went out with no pads on and they had to stop the game so Bill could give me the pads. He was shaking like a leaf and looked up at me, saying, "Thank goodness you've come." I said, "How do you think I feel?"

I got hit in the eye and had a detached retina and severe haemorrhage, but that was batting. I tried to lap Tony Lock against the spin, got away with it a couple of times, but the third time got a top edge. I was in hospital for quite a while, not knowing whether I'd lost the eye or what.

I enjoyed the Derbyshire captaincy at first but I told the club that I'd only take it on the condition that it didn't affect my home life and the team's performances. I only did it for a season and a half, but it got to the stage that for the first time in my professional career I wasn't looking forward to going to the ground. I was dreading it.

I went on I don't know how many tours, understudying Alan Knott. Playing second fiddle was tough but you did your best. You had to be philosophical about it all. There's only one wicketkeeper who can play. I was never going to get Knotty out [of the team], because he was too good, too consistent. That's the name of the game. 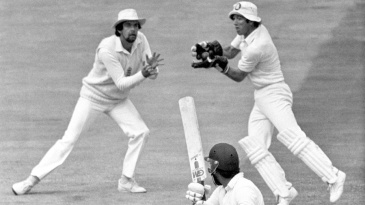 'Standing up to the wicket is what keeping is all about'