'I never ever worried about getting hit for six'

Former England spinner Eddie Hemmings recalls how he began to bowl offies, Kapil's sixes at Lord's, bowling on green wickets, and rooming with another snorer Eddie Hemmings: "As a spinner, I'd rather bowl on a hard green wicket than a turner, because you got that extra bounce" © PA Photos

It didn't matter to me who I was bowling at. They were a batsman, I'd got six balls, and it only took one ball to get whoever it was out. Viv Richards, Graham Gooch, Geoff Boycott - it didn't matter. One day it would work out for me, the next it would be the batter's day, and that's the way I saw it.

Shakoor Rana wanted to stop the game because we were doing too well, I think. There was nothing untoward going on in the game. The batsman was aware that the field was moving. I was bowling and I made sure the batsman was aware of it. Gatting did. It was only deep square coming up to save the one - I can't remember who it was, but they were dawdling - but Shakoor Rana decided to stop the game and call Gatting "a cheat". And something else. Gatt did well. If someone had called me that, in the manner that he did, I'd have probably risked breaking my hand on his nose.

Kapil Dev at Lord's? Two good shots and two slogs! People forget that they were quite short boundaries, because they were building the media centre at the time - although one did disappear straight over the top of the lot, to be fair.

My first club was Lockheed, the Works team in Leamington. They made brakes, clutches and stuff. My dad used to skipper the Sunday team and I'd carry kit around. They were short one week - I was about nine - and that was it. I was started. My first adult game of cricket. I think it was in my genes a bit.

As a spinner, I'd rather bowl on a hard green wicket than a turner, because you got that extra bounce.

I started as a seamer-batsman. I'd been on the staff since 1965 and by 1971, after I'd played a reasonable amount of first-class cricket, I got to the stage where I realised I wasn't going to be quick enough. A change had to be made.

I don't think it's possible to legally "bowl" a doosra. You have to throw it.

After Kapil had hit three sixes, I turned to Goochie and said, "What's the follow-on?", because I don't look at scoreboards. He said, "One more of them and they've done it." I don't think we'd have won if we'd made them follow on. And Goochie wouldn't have got his second hundred. A lot went on in that game, more than just four balls that I bowled! And anyway, he tried to do it again second innings and was caught at deep midwicket.

There was always plenty of grass on at Trent Bridge. When you got there you would literally see the white lines at each end and that was the only thing that determined where you were playing. I used to love it. It was very, very exciting cricket.

Lance Gibbs, who was our spinner, announced he was going to retire at the end of the 1972 season, and I thought I used to bowl offcutters, so it wouldn't be as big a change as people thought. But it took me a good four or five years to get things like the run-up right. Then it was a case of learning how to get people out.

There were a lot of good overseas players around, but I wouldn't have swapped [Richard] Hadlee for anyone else.

In the first innings at Lord's [in 1990] I bowled the best ball I bowled in my life to get rid of Azharuddin: bowled through the gate, driving, on 120-odd.

"When I started, basically your fitness was up to you. I was always a bit rotund, but I always trained harder than anybody else. And I was never ever short of energy to bowl"

The 1987 World Cup final - we lobbed it, totally lobbed it. The reverse sweep that Gatting played really well, he didn't play really well because he'd preempted it. He should have swept it, but back-flapped it on to his shoulder and got caught. It was Allan Border bowling, and that was a last resort. We were walking it, totally walking it. A sad day.

It was a bit of a blow when I got given out on 95, yeah, mainly because I didn't hit it! Bruce Yardley bowling around the wicket, it flicked both my pads and went over off stump. I was disappointed, but I was also pleased I'd done what I'd done, because I'd never done nightwatchman before.

I was taken over to Warwickshire by our club coach, Ray Carter, for an Under-12s trial. Derief Taylor - Lord Taylor's father - and Tiger Smith were in charge, and Derief immediately moved me out of one net into another. I thought, "What's going on here? I'm obviously failing." I didn't find out till many years later, when he told me that it was because I was hitting the ball too hard.

I didn't get as many runs as I should have done. I was a little too aggressive at times.

They always say if you bowl legspin you're a wristspinner and if you bowl offspin you're a fingerspinner. Well, my view was that if I didn't use my wrist, I wasn't getting anything on the ball.

The biggest help to me from my Warwickshire days was John Jameson, without question. During those stages when I managed to get into the team, he'd pick me up, take me to the different grounds, and say, "Right, you're rooming with me." I didn't even have to look around for a roomie. He took me under his wing. He was brilliant.

I dropped Sachin [Tendulkar] when he got his first Test hundred, at Old Trafford. Caught and bowled.

Warwickshire offered me a one-year deal, which I declined, and I was sat around at home when Ken Taylor called from Notts. It was the only call I got. I liked the club, the ground, I knew the city, so it was an easy decision, really. It wasn't until later that I found out that the Warwickshire chairman, Cyril Goodway, who actually played cricket for Warwickshire with Ken Taylor, had tipped him off that I was leaving: "We'll just let you know before we let everyone else know…" kinda thing. The old insider trading.

I was quite happy when I retired. I knew it was coming. I'd got knackered knees and it was becoming uncomfortable to get out there and play, even to train how I wanted.

I was very disappointed not to get picked for India for the 1981-82 tour. I was probably the leading spin bowler in the country as far as wickets went, and I thought, "Well, that's it. If I don't get picked now, having got 80-odd wickets, I'm never going to get picked." It was a funny era for selection. There was no continuity in it. You had to listen to the radio to find out whether you were playing.

I made my England debut against Pakistan at Edgbaston, which was a bit of a finger up to the committee room for only offering me a one-year deal. I was incredibly nervous because I wasn't actually bowling as well as I'd been bowling the year before. I wasn't flowing. Then I got a call-up, which was a bit of a shock. I got a wicket first over and it went downhill from there, really.

I got a six-for against New Zealand at Edgbaston, including Hadlee caught at slip, and the only reason was because the seamers didn't want to bowl with the ball, so I said "Yeah, give it here". If the ball had been in better shape, I wouldn't have been bowling.

I didn't get much sleep when I roomed with Derek Randall. He used to snore, I used to snore. We got stuck together because of it, but it didn't work out too well because neither of us slept. We ended up in single rooms.

The 1989 Benson & Hedges final is a bit of a blur. I got in there at the end when we'd all but cocked it up. I had a little meeting with Bruce French while they were moving the field all over the place for about five minutes. I said, "I'd better hit it for four, hadn't I?" He said, "No choice." Then all of a sudden Goochie moved deep cover over to the leg side, and one of my favourite shots was to back away and hit it through the off side, so that's what I did.

Clive Rice was a very good captain, very attacking. He'd rather lose a game trying to win than draw. We always gambled. Some of the targets we set were very generous, but Ricey would say, "If we don't bowl them out it's our fault". It suited me, having a South African captain. 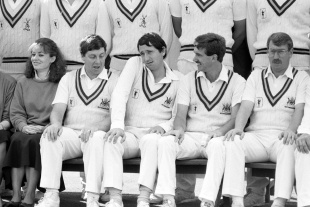 I started in 1979 at Notts and played till '92, and there was only one wicket that was made for me to bowl on. And we almost lost the game, because we nearly got bowled out by the opposition's spinner, Rodney Ontong. I said, "If you doctor the wicket, you're going to bring in their spinner". I was quite used to bowling on green tracks, with Rice and Hadlee. In fact, I used to like it.

I'm groundsman at Caythorpe CC, my son is chairman. Not only do we do son-dad stuff, we do boss-worker stuff as well. And both my sons are seamers, so of course I prepare the odd wicket to help them out.

When I started, we played the 2nd XI games and in the Minor Counties Championship. I played Monday, Tuesday - two-day games, they were - Wednesday, Thursday. On Friday you'd play Club and Ground, and on the weekend you'd go off and play for your club. My first season, the only time I didn't play was when it was pouring with rain.

It was a strange era to grow up in. You didn't really ask people for advice. I made the mistake of doing that with Tom Cartwright - who I got along with well later on - when I asked him how he bowled his inswinger. I couldn't get anything going the other way. He sort of said, "Well, you'll just have to find out." And that was typical of the era. They looked after their place in the side and didn't help anyone outside of it.

The most dramatic change I saw over my career was fitness levels. When I started it was an individual thing and basically your fitness was up to you. I was always a bit rotund, but I always trained harder than anybody else. And I was never ever short of energy to bowl.

When I got on the staff at Warwickshire, there were loads and loads of high-quality players to sit and watch. You didn't get a lot of coaching as such. You just sat and watched. And listened. If they were talking, you listened. And you picked it up that way.

I never ever worried about getting hit for six. I never ever panicked for the next ball and thought, "Oh my god, what's he going to do?" And I would never ever turn round and say, "I'm sorry, lads, I've just cost us the match, because they've saved the follow-on."