'Umpiring is done by machines these days'

Back in Dickie Bird's day the officials got respect and gave it. One of cricket's iconic umpires looks back My first job was working down a coal mine. That's what I was doing before I got into cricket. I worked as a fitter from the age of 15 to 19.

If I had to describe myself as an umpire, I'd like to say I was honest and fair. I treated everybody on the field as human beings and as professional cricketers. If I had the respect of the players, then marvellous.

My final Test, with the guard of honour from the England and India players, was marvellous. I didn't know what was happening but I had an idea that something was going off. I walked through the Long Room at Lord's and everyone was off their high seats, clapping. Both teams were lined in a channel for me to walk through. I had a lump in my throat and tears in my eyes. People who saw Don Bradman's last appearance in cricket at The Oval said he got a tremendous reception, but they tell me mine were better. It's a day I shall always remember.

If I could turn the clock back, I would have stayed at Yorkshire as a player. I couldn't see myself nailing a place in the Yorkshire team. I was in and out of the side. That's why I left but I wish I hadn't. It's my biggest regret.

We had to look down for the no-ball, we had to look at any edges, where it pitched - we had all those decisions to make. Now I think all the authority has been taken away from the umpire. It's like umpiring is now done by a machine. It's made by electronic aids. It's very, very sad that umpiring as we knew it is finished. If you asked me who are the best umpires in the world right now, I couldn't tell you because umpiring is done by a machine.

If Yorkshire could put their best team out on the field for every game, we would win the County Championship ever year. We are the envy of every county side in the country, with so many magnificent young players. It's just like a conveyor belt of young players who are so talented. They just keep producing these lads who go on to play for England. It excites me tremendously, seeing all that talent. There's a lad, Matthew Fisher, he will play for England, that boy. If he's sensible - and I think he is - and everything goes his way, he will be an excellent player. Jason Gillespie, Martyn Moxon and Ian Dews have done a tremendous job.

"The conductor said, 'Fares, please.' He had a white cap on and I thought it looked like one of mine. I said: 'Excuse me, sir, where did you get that?' He replied: 'Haven't you heard of Mr Dickie Bird? It's his hat'"

Whatever you say about the technology, it's here to stay. Everyone seems to want electronic aids, so we have to have them.

The World Cup final in 1975 between West Indies and Australia was the best game of cricket I've ever umpired - but I had to be wary of the West Indies fans. I had to have a box of white caps made for me every time I umpired them, because they used to run on and nick them. At the end of the World Cup final, someone whipped my white cap off and I saw him run through the thousands of spectators who used to go on the field.

My first love was football. Cricket was very much second. I played football and cricket when I was at school, both for Barnsley. When I left school, at 15, I signed for Barnsley at football. I was an inside-right. I was there until I was 16 or 17 before I decided to stick to cricket. I don't think you could play two games. It's hard work. Cricket gave me a longer career.

The best cricketer I ever saw was Garfield Sobers. He was a truly great player. He was three cricketers rolled into one. A great entertainer, and on top of that, he was a gentleman.

One day I caught a London bus because my car was off the road. The conductor came on and said, "Fares, please." I looked at him and he had a white cap on and I thought it looked like one of mine. I said: "Excuse me, sir, where did you get that?" He turned round and replied: "Haven't you heard of Mr Dickie Bird? It's his hat. I ran on the pitch and got it and I am so proud of it." I thought it was great. I never let on that it was me.

In the modern-day game, I loved watching Jacques Kallis. He was a fine player. Sachin Tendulkar and Brian Lara were incredible to watch. But those three are now finished. They would be three outstanding players in any era and now they are gone. It's sad.

Geoffrey Boycott is a good friend of mine but I don't think he was right when he said I suffered from nerves when I played. I think I worried a lot, and that's what he's probably thinking about, Geoff. I got low scores and I used to worry.

I had to have a word with Merv Hughes once. He was bowling to Graeme Hick and he kept playing and missing. Merv's language was getting worse and worse and I had had enough. I turned to him and told him: "I want you to be a good boy. Don't swear anymore." He looked at me and said: "Dickie Bird, you're a legend. I won't swear again." He came in next ball and Hick played and missed again. Never swear again? I've never heard language like it after that!

I'm about to become president of Yorkshire - and what a tremendous honour that is. Never in my wildest dreams did I ever think I'd be president when I walked through those gates as a 16-year-old for the first time. It's one of the greatest honours of my life.

I was walking off the field in a Test match at Old Trafford once. There was a Lancashire supporter right at the top of the members' enclosure. He'd had so much to drink he couldn't stand. He shouted at me, "Bird, it's the best day of the year, it's blue sky, red hot, the sun's shining, you can't take them off. What is your problem?" I said: "I have no problem - but it's lunch!"

I didn't have any superstitions. I had faith in the Lord. That was good enough for me.

One man I cannot wait to see develop is Will Rhodes. I watched him play for England Under-19 over the winter and he looked a real prospect.

Yorkshire County Cricket Club is the greatest club in the world.

The funniest thing I've seen on a cricket field was when the drains burst at Headingley. There was torrential rain before the Test match and they were all saying the match would be delayed. The ground staff worked through the night to get the pitch fit because it was like a lake. Somehow we started on time and England won the toss and batted. Curtly Ambrose went to bowl the fifth ball of the day and stopped and said: "We've got a big problem here, Mr Dickie. You better come and look, man." Halfway through his run-up there was spray, like a fountain, the water coming up above his boots and mine. We trooped off and the crowd were shouting: "Same again, Bird, what is your problem?" I told them: "We've got a big one, we need some plumbers!"

I did 25 years as a Test umpire. If you worked it out, with all the Test matches played today and ODIs, I think if I'd have done 25 years now I'd end up standing in 500 international matches. 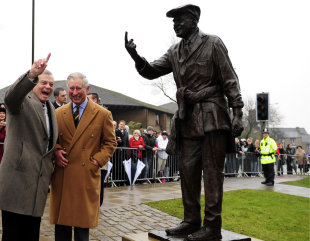 With Prince Charles by the statue of Bird in Barnsley © AFP

There were so many great players in my day, it's hard to pick a favourite that I umpired. Barry Richards, Sunil Gavaskar, Viv Richards, Graeme Pollock, Garfield Sobers, Alan Knott, Shane Warne, Lance Gibbs and Abdul Qadir were all enjoyable to watch. Then there are the quicks: Michael Holding, Andy Roberts, Joel Garner, Malcolm Marshall, Richard Hadlee, Imran Khan, Kapil Dev, Waqar Younis and so on. The left-armer, Wasim Akram, was tremendous as was Sachin Tendulkar.

When the legends from Pakistan, India, West Indies and Sri Lanka retired, they used to invite me to their homes if I was on holiday. Dennis Lillee, the greatest fast bowler I've ever seen, used to invite me to come round and have a meal with him and his family. How great a thing to do was that? I doubt it happens nowadays.

I go to all the county matches. I will go to every home match and as many away matches as I can as president of Yorkshire.

I enjoy watching Kevin Pietersen. What a fine player. I don't know what's behind England's decision to get rid of him. It's got to be in the dressing room somewhere, but I just love watching him.

In my spare time I go down to watch Barnsley a lot. I'm a season-ticket holder at Oakwell for my sins. It is a bit frustrating, though. I would like to see more Barnsley youths playing, the local lads who have got Barnsley at heart. There's not one boy in the squad that is a Barnsley-born player. We have got one of best academies in the country so why can't we use some of them?