A lion in winter

When I phone Graeme Pollock to ask for this interview, the conversation moves swiftly to Clive Rice's recent brush with malaria. Rice was in the Kruger National Park early in the new year and started developing symptoms when attending his son's wedding on the Natal South Coast a week or two later. Everything is fine now but the barnstorming allrounder was in intensive care for ten days and people were concerned. "We always say that Ricey thinks he's bulletproof," says Pollock amiably. "He doesn't get infections or diseases like the rest of us."

Old age has snared Pollock - he turned 70 in February - so he's possibly more sensitive than most to the sharpening of Father Time's scythe. He hasn't been well himself in recent months, first suffering with stomach and colon problems before being frightened by a mild stroke just before last Christmas. "I was talking to my daughter and she noticed my cheek sagging. For an hour I couldn't talk," Pollock says. "A mild stroke was diagnosed and we moved from one hospital to another trying to find a neurologist. We struggled because they were all in their holiday houses in Plett (Plettenberg Bay, on the southern Cape coast, about 500km from Cape Town) because it was holiday season. Things are fine now. I've stopped the speech therapy and put on two or three kilograms, so things are returning to normal."

Pollock's health might have returned but he and his generation are still locked in their unpublicised standoff with the cricket authorities. Players like him and Rice are largely ignored by Cricket South Africa for their role, imagined or otherwise, in what the current administrators think of as apartheid cricket. The numbering of Proteas caps starts in the post-isolation phase of South African cricket in 1991 and past players before that - black and white - are seen as a kind of social embarrassment by the current regime. It's a sad but piquantly South African state of affairs, all the more tawdry for the fact that neither side has the ability or inclination to get around a table and thrash the matter of the country's fractured cricket past once and for all.

Though it might seem cut and dry politically, it's not an emotionally simple situation for Pollock. Pride prevents him from whingeing too much and he doesn't want to be typecast as a bitter voice from the sidelines, the role Rice once played but has since thought better of. Pollock isn't looking for handouts so much as recognition and warmth, a form of which he received late in 2013 when the officials of Eastern Province Cricket decided to honour him by naming the St George's Park grandstand in his name. He notes wryly that for the men of Eastern Province it wasn't his pre-1970 Test-playing credentials that came under scrutiny. Instead it was his unpopular decision to migrate to the Transvaal in 1978. He had always been a Port Elizabeth boy and to this day some in PE's small cricket-loving community accuse him of being a verraier - traitor in Afrikaans.

In many ways Pollock had a golden Cape boyhood and his memories of his school-going years remain glowing and freshly pressed. One of his earliest is from 1954, of a train trip to Graaff-Reinet in the Karoo, where his Under-11 side at Grey prep played Union. Grey were bowled out for 128. Pollock scored 111 of them. "The field was so designed that they had a cemetery beyond the square-leg boundary. I remember pulling six sixes into the graveyard. It always was one of my favourite shots."

The St George's Park decision was particularly touching for Pollock because the venue was in many ways the centre of his young life. He was a ball boy during the St George's Park rugby Test between the Springboks and the British Lions in 1955 (this was before Port Elizabeth's dedicated rugby stadium, Boet Erasmus, had been built) and he rattles off the entire Springbok team that day, as well as some of the more famous Lions, like Tony O'Reilly, Jeff Butterfield and Cliff Morgan.

Always a sweet timer of the ball but essentially a rudimentary technician, Pollock was a player who trusted his still head and quick hands and responded instinctively to the Aussies

He went to school not a stone's throw away and remembers endless afternoons under the African sun playing cricket, tennis or rugby. "I missed Grade 2 because I was promoted up, so when I matriculated [in December 1960] I was a young 16 and ten months. It made quite a big difference. I was the first XV fly-half and our big rugby game in those years was against St Andrew's in Grahamstown. They had post-matrics in their side, so you can imagine the difference that two or three years made at that age."

Pollock's struggles with Latin - "It was a shocking subject, I struggled hard on Latin" - and the older St Andrew's loose forwards soon became irrelevant, because he was playing Test cricket a year or two later at the age of 19. In Adelaide on the South African tour of 1963-64 he met Eddie Barlow at the wicket with South Africa 70 for 2. Trevor Goddard's men had bowled out the home side for 345 in the first innings, and were carefully establishing parity. The impetuousness of youth soon took over though, both youngsters galloping to centuries before close of play. "We scored 180 runs in the last hour," remembers Pollock, the South Africans finishing the day on 295 for 2. Sunday was a rest day but on the Monday, South Africa posted 595, the third-wicket partnership of 341 between Barlow and Pollock scored in 283 minutes. South Africa won the Test by a canter and Pollock and his generation had arrived to the awestruck gasps of the wider world.

Pollock liked playing against Australia. He scored five of his seven Test centuries against them and averaged nearly 70. Always a sweet timer of the ball but essentially a rudimentary technician, Pollock was a player who trusted his still head and quick hands and responded instinctively to the Aussies, especially their bristle and commitment to attacking cricket. He was more temperamentally lukewarm about the English, finding fault with their recourse to early defence if things weren't going their way. He did, though, learn more from their players. Trevor Bailey was his manager when he played for the Rest of the World (RoW) side in 1970, and Pollock remembers listening carefully. "It was intriguing to talk to him. He made comments so logically. You hadn't thought of it in that way and it made complete sense. [Geoff] Boycott, [MJK] Smith, [Colin] Cowdrey, and [Ted] Dexter were all hugely intelligent and knew the game of cricket. I trusted Boycott. Maybe the way in which he put things across wasn't so great but the content was always good. Of those I played with Barry [Richards] always told you things that were out of the ordinary." Getting into stride: in a 1977 match © Getty Images

The sweetly menacing left-hander has drifted from the game he so obviously loves. He watches cricket on television but is seldom to be found at a live game anymore and is mildly dismissive of the standard of domestic South African cricket. Such a withdrawal seems both inevitable for a man of his age and filled with a peculiar form of local melancholy, given the crown Pollock once used to wear. When I was a boy I distinctly remember hearing the news that he would have to start wearing glasses, having injured his eye in a club game. The story migrated from the back to the front pages of the local newspapers and was discussed for days. It was almost as though Pollock's eyes were a national treasure - the sporting equivalent of Trotsky's or Einstein's brain - and his failing eyesight somehow had an impact on all of us, although in ways we would have struggled to pin down and identify.

The saga of the spectacles was not without its lighter moments, however. When batting, for instance, with a prescription lens for one eye and glass for the other, Pollock scored 136 for the World XI against Australia in Adelaide a month or two after being prescribed. "I can't remember who I was batting with but I remember asking them to take strike for 15 minutes because I couldn't see a thing. It was so hot that my hankie was sodden and I had no way of wiping the lenses," he says, laughing gently.

The rest of the '70s passed with the hard, cold bite of isolation, and the walls of domestic cricket creeping ever closer. The local game transformed itself into something repetitive and increasingly bitter, and Pollock eventually escaped the parochial confines of Eastern Province, heading up to the Transvaal. He found mateship in Johannesburg, playing golf at the Wanderers and cricket at Old Edwardians, the city's two pre-eminent clubs, and became the in-house cavalier in the middle order of the dominant Transvaal side of the era, nicknamed the "Mean Machine".

Aged over 40, he was still at it the following decade, rattling off a quick ton against Kim Hughes' rebel Australians, their attack featuring Rodney Hogg, Carl Rackemann and John Maguire. It was a wickedly disrespectful innings, still remembered in South Africa today. The secret was in a strong and supple right wrist as he picked up length early and manipulated the bat with incredible speed. Just like the Pollock of old in other words.

Luke Alfred is a journalist based in Johannesburg and author of When the Lions Came to Town, the story of Willie John McBride's Lions trip to South Africa in 1974 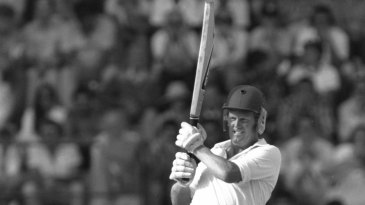 The emperor reigns at Kingsmead

Batting with the prodigiously talented young Barry Richards at Kingsmead in 1970, Graeme Pollock stepped up his game; the Aussies barely survived to tell the tale An artist in the super league of left-handers

If you're a South African born not later than the sixties, there'll only ever be one No. 4 for you