Sunny's epic, and another tied Test

September is a month of heart-stopping chases, from The Oval to the Wanderers

September 2014
Tweet
No one could have imagined that India would come within nine runs of a record win when they were set 438 to get in little over a day at The Oval. But Sunil Gavaskar's flawless 221 winched them within hailing distance. Gavaskar first had a double-century opening stand with Chetan Chauhan, then a 153-run partnership with Dilip Vengsarkar. With 20 overs remaining, India needed 110 with nine wickets in hand. Even after Vengsarkar and Kapil Dev fell in quick succession, the chase was on, but a tactical move by Mike Brearley put a spanner in it: he handed the ball to Ian Botham, who had become the fastest to get to the double of 1000 runs and 100 wickets (in 21 Tests) earlier in the match, but hadn't looked threatening all day. Botham had Gavaskar caught at mid-on, dismissed Yajurvindra Singh and Yashpal Sharma lbw in successive overs, and ran out out S Venkataraghavan in between. At the start of the final over, India needed 15 runs and all four results were possible. Karsan Ghavri and Bharath Reddy, Nos. 9 and 10, played out the six balls encircled by fielders. 1979:The last-mile blues
Though his career will forever be tainted by the match-fixing scandal, Mohammad Ashraful will also be remembered as the youngest player to score a Test century. At 17 years and 61 days (there are doubts about what his actual age was at the time, but he was the youngest to the record), he made 114 against Sri Lanka at the SSC on debut, breaking the mark set by Pakistan's Mushtaq Mohammad (17 years 78 days) in 1960-61. Ashraful, who was not out on 4 at the end of day two said afterwards that he had trouble sleeping that night. "I dreamt about Lara's 375 and me scoring a century." The next day he pulled Chaminda Vaas for fours and danced down the track to hit Muttiah Muralitharan over the top. Murali, who took ten wickets in Sri Lanka's innings victory, broke another record, becoming the fastest bowler to 350 Test wickets. He and Ashraful were jointly awarded the Man-of-the-Match cheque, but Murali gave his share to the teenager. The only other batsmen under the age of 18 to score Test hundreds are Hamilton Masakadza and Sachin Tendulkar. 2001:The boy who soared and fell
Twenty-six years after Bob Simpson was in the thick of things in the first tied Test, he sat and watched, as coach, his Australian charges finish with a similar result, this time in Madras. The last day began with Allan Border declaring, to set India 348 to get in a minimum of 87 overs. It looked on at tea, when India were 190 for 2. But with just 18 needed from five overs, Ray Bright struck twice. Off the final over, bowled by Greg Matthews, India needed four runs, with one wicket in hand. Ravi Shastri took two from the second ball and, strangely, stroked a single off the third to give strike to the No. 11, Maninder Singh, a Chris Martin-esque tailender. "I had to make the winning run and Ravi came up to me and showed me the gaps. He said if you could get a run, get it, otherwise give it a smack. That is what I was trying to do," Maninder, who was trapped lbw off the penultimate ball, said later. He wasn't very happy with umpire V Vikramraju's decision. "I was surprised because before I even played the ball, I could see his finger going up." The hero of the Test was Dean Jones, who battled nausea and dehydration to score a double-hundred. 1986:Tied in Madras
The shot that launched a thousand premier leagues. Misbah-ul-Haq's ill-fated scoop caught beyond the circle gave India the inaugural World T20 title and paved the way for auctions, million-dollar contracts, and the Chris Gayle phenomenon. The tournament, hosted by South Africa, was a great success despite India's initial reluctance to participate. Most matches were sold out; Zimbabwe beat Australia; Gayle scored a trailblazing hundred; India and Pakistan had a penalty shootout-style bowl-out; and Yuvraj Singh hit each ball of a Stuart Broad over for six. The final was the perfect end, a refreshing change from the miserable 50-over World Cup a few months before. Set 158 to win, Pakistan were in trouble at 77 for 6 when Misbah turned the game around with three sixes in an over off Harbhajan Singh. The target from the final over was 13, with one wicket in hand. MS Dhoni tossed the ball to medium-pacer Joginder Sharma. A wide and a six later, Pakistan needed six off four balls. Misbah attempted a risky ramp shot over short fine leg and was caught by Sreesanth, to give India their first global title since 1983. 2007:The dawn of cricketainment
Before the Gangnam Style World T20 win in 2012, West Indies' most recent major title was this Champions Trophy victory against England at The Oval. It was edge-of-the-seat stuff, as Nos. 9 and 10, Courtney Browne and Ian Bradshaw, saw off Steve Harmison and Andrew Flintoff and dragged their team out of a position where they were headed for sure defeat (147 for 8 chasing 218) and took them to a two-wicket win in growing darkness. When Bradshaw struck the winning boundary in the 49th over, his team-mates rushed onto the field screaming with joy. The captain, Brian Lara, dedicated the victory to those back home, where hurricanes Ivan and Jeanne had wreaked devastation earlier in the month. 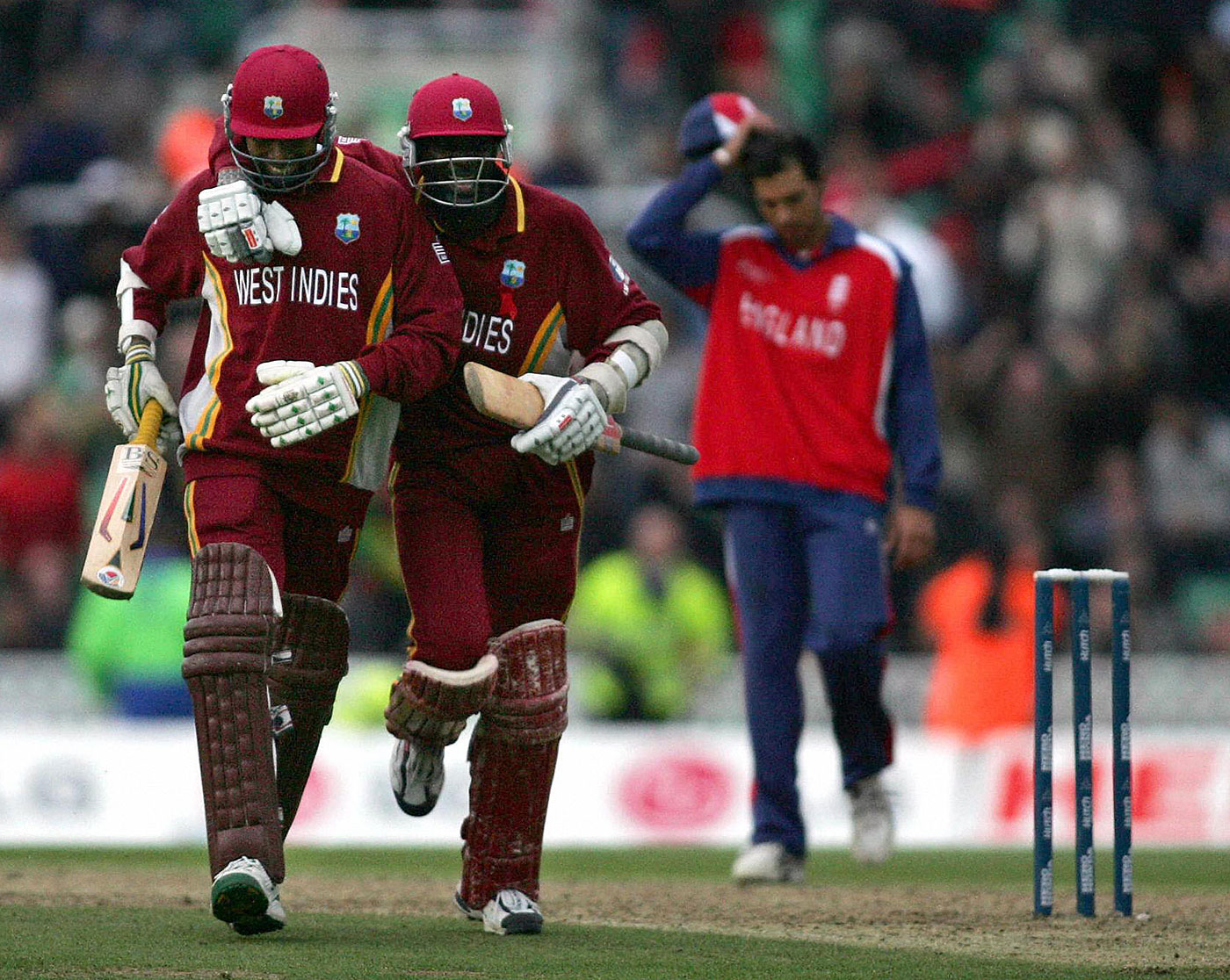 2004:Sparkly in the gloom
By the early 1960s, the dull and defensive cricket of the previous decade had badly affected crowd attendances at Test and county matches in England. The MCC decided one way to bring back the interest was to have a knockout 65-overs-a-side competition. Thus, the Gillette Cup was born. It didn't start well, with the media largely ignoring it, and the players playing it like a traditional first-class game with attacking fields. But by the second round, the enthusiasm rose all round. There were still those who didn't appreciate the nuances of limited-overs cricket. In the Daily Express, Keith Miller accused Sussex captain Ted Dexter of "spoiling" the day as his side beat Kent by 72 runs. "Dexter used nothing but short-of-a-length pacemen with the idea of keeping Kent's score down." In a defensive move, Dexter put nine men on the boundary during the closing stages of the final, ensuring Sussex took the inaugural title, beating Worcestershire by 14 runs in a sellout at Lord's. The Express moaned again: "Ted Dexter's tactics, successful as they were, could eventually kill a great idea." Not quite: the Gillette Cup proved to be a massive commercial success and it wasn't long before other countries set up similar tournaments.