Jumbo is a tired man. But he is still going at Trinidad's Queen's Park Oval, spreading fun and joy for the price of peanuts

The spectacular ringside entertainment associated with T20 did not emerge with that genre; it was born in the Caribbean, during Test matches of all things. Was born in days before Test matches became forlorn affairs, bereft of suitors. Born when a Test stadium was the site of seething, animated, knowledgeable crowds prepared to sit through five days, tense or dull, to see their team in all its glory.

Into humdrum passages of play stepped characters from beyond the boundary: conch blowers, drum beaters, rhythm sections, deejays, picong masters, flagmen, costumers and streakers. Every Caribbean ground had its stars. Gravy, Mayfield, Pappie and Chickie in Antigua; Mac Fingall and the late King Dyal in Barbados; the late Blue Food in Trinidad. Most have hung up their kit, outdone by age and T20 hyperactivity.

One stalwart perseveres at Trinidad's Queen's Park Oval, 45 years after he first came to the ground: Jumbo the nuts man.

"I love cricket, I think cricket is the onliest sport in the world. I don't know why they say soccer is the best sport," he tells me. "Cricket is a gentleman's game."

We are sitting in the Carib Beer Stand on the final day's play of the second Test between West Indies and New Zealand. The stand is sparse; hardly 200 people there, though entry is free and it is a public holiday and West Indies lead New Zealand convincingly. Jumbo's red t-shirt with SIMMONS 54 and a Trinidad and Tobago flag emblazoned on the back, hangs loosely over his red knee-length shorts. His calves are sinewy. His feet, clad in black leather shoes and black socks, are neat and small. His long dreadlocks are bound by a rasta-coloured tam. The brass-coloured bracelet on his right wrist, he says, had once been silver.

"I think cricket is a real Trinidad sport. When I was growing up everybody play cricket - doh care how small you is. First bat I play cork-ball cricket with was a coconut branch. We used to play in the road." But then, "I get a bouncer that cut me over the eye," he says, shutting his left eye to show the scar. "I stick to windball cricket and soccer after that."

He is surprisingly soft-spoken in conversation, and wary about giving an interview for free. As we talk, he continually interrupts himself to put a small royal-blue plastic megaphone to his mouth and shout at the players. He is not impressed by Sulieman Benn, and he lets Benn know. Loudly.

"Benn is a club player," he tells me dismissively.

"The first game I see at the Oval was England against the West Indies. My mum used to sell dem time." He says he has a lot of "memorabilias", all sorts of autographed merchandise. He does not feel safe storing the prized Sachin Tendulkar jersey in his Port-of-Spain home, and so has left it with his wife and children in Canada, where he spends a good part of the year.

"My mother used to say, 'Son, always sell yourself first. If people love you, they will buy from you'"

There was once a rumour going around Queen's Park Oval that a collection had been taken up and funds raised to send him to Lord's, and that he had disappeared instead to Canada. He bristles at it. "Nobody took up a collection for me," he says. "I passed a box around asking for donations." He only managed to raise TT$500 (US$78) and went and distributed it to the homeless in one of the city squares because it just wasn't enough to get him anywhere.

It does not cloud his memories of his times at Queen's Park Oval.

"I saw people like Keith Stackpole, Majid Khan, Imran Khan, Sunil Gavaskar. The best batsman in the world is Brian Lara. The greatest allrounder I ever see is Sir Garfield Sobers. He's a complete cricketer. The most consistent is Sachin Tendulkar. Brian Lara is the only Trinidadian to have captained West Indies in a while. I think this team is not giving [Denesh] Ramdin the support he needs."

And then he dozes off abruptly, his head suddenly dropping onto his chest. (He'd been drinking beer consistently, though it was not yet midday.) A ball goes past the wicketkeeper and the small crowd erupts. In a flash, without seeing a thing, Jumbo is up and bellowing into his megaphone: "What is going on?" He enunciates each word slowly, like a schoolmaster scolding an errant class.

He subsides again; recognising that he was too far gone, he suggests that I get my questions in quickly because he needs to take a rest. I let him take it. He goes lower down the stand and, spreading himself over four seats, immediately falls asleep. Five minutes later the place erupts again; Jumbo remains unmoved - eyes shut, stomach rising and falling in even motions.

Two hours pass before he moves again. Chris Gayle and Kraigg Brathwaite are on their way to finishing the match inside the 20 overs Gayle thinks he has. Jumbo vaults to his feet, highly animated now, and for the 40 minutes till the game ends, he paces from one end of the stand to the other, jumping, dancing, shouting incessantly through his royal blue, everything coming out in threes: This is how Jumbo the nuts man, known for his amazing throwing arm, wit and timing, had adapted to the times. The performance was his own version of Test cricket turning to T20. While new characters pop up in Caribbean cricket, they are cultivated in an artificial way - organisers putting out prizes or recognition for the coolest fan, the most make-up, the Busta move - and are nondescript in their outlandishness. Jumbo evolved out of his own head, one of the original characters, and perhaps the last one too.

It's Saturday night in St James. Outside the amphitheatre where one of the country's top steelbands, Petrotrin Phase II Pan Groove, is holding a celebratory concert, Jumbo is selling hot corn soup and cow-heel soup from his small cart.

The corn soup is exquisite: a delicately seasoned creamy broth generously dotted with dainty cuts of sweet potatoes, potatoes and carrots, with grains of corn and chickpeas floating betwixt the thinnest slices of corn I have seen. For such a rambunctious creature, he is fastidious at his trade. His cart is neatly laid out, he uses hand sanitiser before serving each customer, and his courtesy is pristine.

"Have a beautiful night. Enjoy the soup. Get home safe," he tells a young coastguardsman who has just bought two large bowls.

"My mother taught me to cook. I learned a lot from her," he tells me, explaining that he slices the corn so thinly by hand so customers can drink their soup elegantly, without a mess.

He is still concerned about his personal information, warning me to confine my questions to cricket; and like a true hustler tells me his manager advised him to be very careful, to make sure he gets paid for giving this very exclusive story to someone. He opens out when I promise to be of help.

His mother had five children, of whom he, Keith Martin, was the last. He began his vendor's life at 11, in the same Carib Stand we had met in - except then it was the Carib/Guinness Stand, and like most Queen's Park Oval buildings, made of wood and corrugated galvanised sheets. He sold soft drinks and his mother's homemade bread and fish. The biggest crowd he ever saw at the Oval was during the 1971 Test series against India, when he sold snow cones to hot, thirsty thousands. In 1974 he started selling at one of the more popular calypso tents (featuring Lord Kitchener). His mother, a deeply central figure in his life, had just stopped plying her trade. His stepfather, Rudolph, gave him TT$38 to set himself up in the peanut business.

With the help of a man named Plankie he began baking nuts daily at what was known as the Poor House, later to become the St James Infirmary. A bakery there supplied government needs, but then the government began to outsource to bigger bakeries. Jumbo and Plankie shifted to the Petit Valley bakery of another baker at the Poor House. He would take the nuts to a popular fete venue called PSA Grounds, and to Queen's Park Oval, where competition was stiff between vendors and he knew he had to find a way to stand out.

In 1976, Trinidad and Tobago's Hasely Crawford won the 100 metres Olympic gold in Montreal, and the ecstatic government named a jet after him. Keith Martin saw an opportunity to brand himself. He began referring to himself as Jumbo (jet) and made his nuts fly to patrons seated in the stands. He ordered larger grains of peanuts, and striding around with his distinctive commodity, shouting "Jumbo nuts, Jumbo nuts" he quickly caught attention. He soon added loud commentary to his repertoire and in no time he was an unmissable figure at matches. What set him apart was the amazing accuracy with which he delivered his brown paper packages - "salt" or "fresh" (unsalted) - to the intended recipient in the then crowded stands. Patrons passed the fee down the seats, tier by tier, happy for the chance to see him in action and to engage in his witty picong.

How did he get such an unerring throwing arm?

"Well, I was always afraid of heights," he says, "so I learned to pick mangoes and coconuts with stones." He could locate the heart of a coconut cluster and with one shot splice it open so that it would rain nuts. He shrugs his shoulders. "I born with that skill."

And the constant engagement with patrons in the stands? The charisma?

While new characters pop up in Caribbean cricket, they are cultivated in an artificial way. Jumbo evolved out of his own head

"I learnt that from my mum. She used to say, 'Son, always sell yourself first. If people love you, they will buy from you.'" He becomes silent for a few moments. The turn of conversation, to his mother and his childhood, has put him in a philosophical mood.

"I think human beings are the most difficult species on the earth," he suddenly pipes up.

"When I was growing up, on a Sunday when my mum was going to the market, I would wake up around 4 o'clock. I used to mind pigs, goats, sheep and I had to look after them because in the evening we had to go to Sunday School. Before she left for the market, she would inspect all the work I did: clean the yard, feed the animals, bring water from the river. She might say, 'Son you do a good job today, it was nice.' But she had a guava whip and when she would reach to the gate, she might say, 'Put out your hand.'"

He would be confused by this, having done his chores and received praise for it.

"But Mum, what you beating me for?" he would ask repeatedly, dutifully putting out his hands and taking the blows.

"Son, I going to the market. I doh know what mischief you will get up to, so I beating you for that." He tells the story with a sense of drama and righteousness, and pride in them both.

"And that is why I grew up so straight." 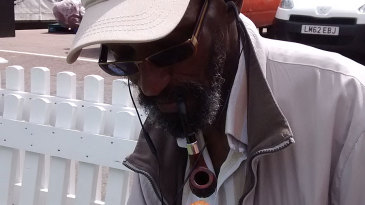 Keith the Pipe Man has marked attendance at Lord's for more than four decades. Life-threatening illnesses may have forced him to quit smoking, but the 'Pipe' still remains his celebrated companion 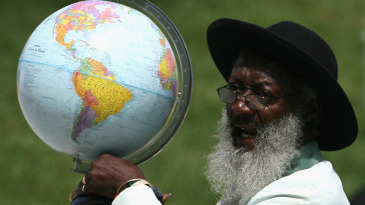 The other side of Gravy

Antigua's No. 1 cricket fan has hung up his boots officially, but he's still around at the ARG