When beige was the rage: Ian Smith in NZ's 1980s heyday

How you're kitted out says a lot about you. Memorable bits of clobber that revealed the most

Zimbabwe, circa 1998: Red violence
My go-to for Loud Shirt Day here in New Zealand (an awareness campaign for the hearing-impaired, often fronted by Lance Cairns) is a violent visual assault of diagonal black, green, yellow and red stripes. Together with the large yellow soapstone bird symbol, it's a fearsome sight that guarantees me a spot in the front row of any bad-shirt photo.

The shirt's exact provenance is unknown but it is emblazoned with the name of former cattle farmer Adam Huckle. He wheeled in during Zimbabwe's Flowery golden era and toured New Zealand in 1998, although I suspect this shirt may not have been donned in anger, as he only played a single ODI against New Zealand, at Headingley in the 1999 World Cup. (Huckle got a golden duck and did not bowl in the rain-affected match.)

These days he is a plumber in England, his loopy leg-spin having wreaked havoc against New Zealand, who constitute 19 of his 25 Test wickets.

New Zealanders, April 1989: White optics
This infamous kit was only ever used once in a weird, late season, airline-sponsored, one-off match between a New Zealand XI and Western Australia at the WACA in Perth.

It is ridiculously obscure and boasts white as its primary colour, complemented by awkward black lines that may or may not represent wickets. There is a signed John Wright outfit from the game in the Beige Brigade wardrobe, but we've never seen another anywhere in the world, ever.

The kit was controversial and caused a lot of head-scratching as the white ball used in the game blended into the bowlers' clothes like an optical illusion. The white shirt and trousers were consequently retired, not to be seen ever again.

Inexplicably, the New Zealanders got their butts kicked in the game by the unlikely duo of the moustachioed Mike Veletta (bat) and Guinness-lover Alan Mullally (ball). Grey menace: Courtney Walsh in a Benson and Hedges World Series game down under in the late '80s © Getty Images

West Indies, 1988-89: Maroon grey
West Indies was the first team I supported, aside from New Zealand. Of course I hated Australia, for which Channel 9 was to blame, beaming its Australian propaganda and jingoistic enthusiasm into Kiwi lounges all summer. Tony Cozier's dulcet tones were often the only respite.

Burnt into my retina is the Windies' grey kit with the maroon torso stripes - one fat, two thin. It was the kit that changed colour when the players sweated, like a budget pre-90s Hypercolour t-shirt, the kit West Indies wore when winning the 1984-85 World Series. It was the kit that seemed to unbutton down to the sternum too, a million times cooler than their glow-in-the-dark orange/pink kits of the early World Series.

It goes without saying nobody wore it cooler than Viv. Short sleeves, maroon cap, eyes of steel, forearms of iron, Rasta sweatband, fearsome beard: that whole summer I wanted to be Viv, probably even more than that other Vivophile, Ian Botham, wanted to be Viv. 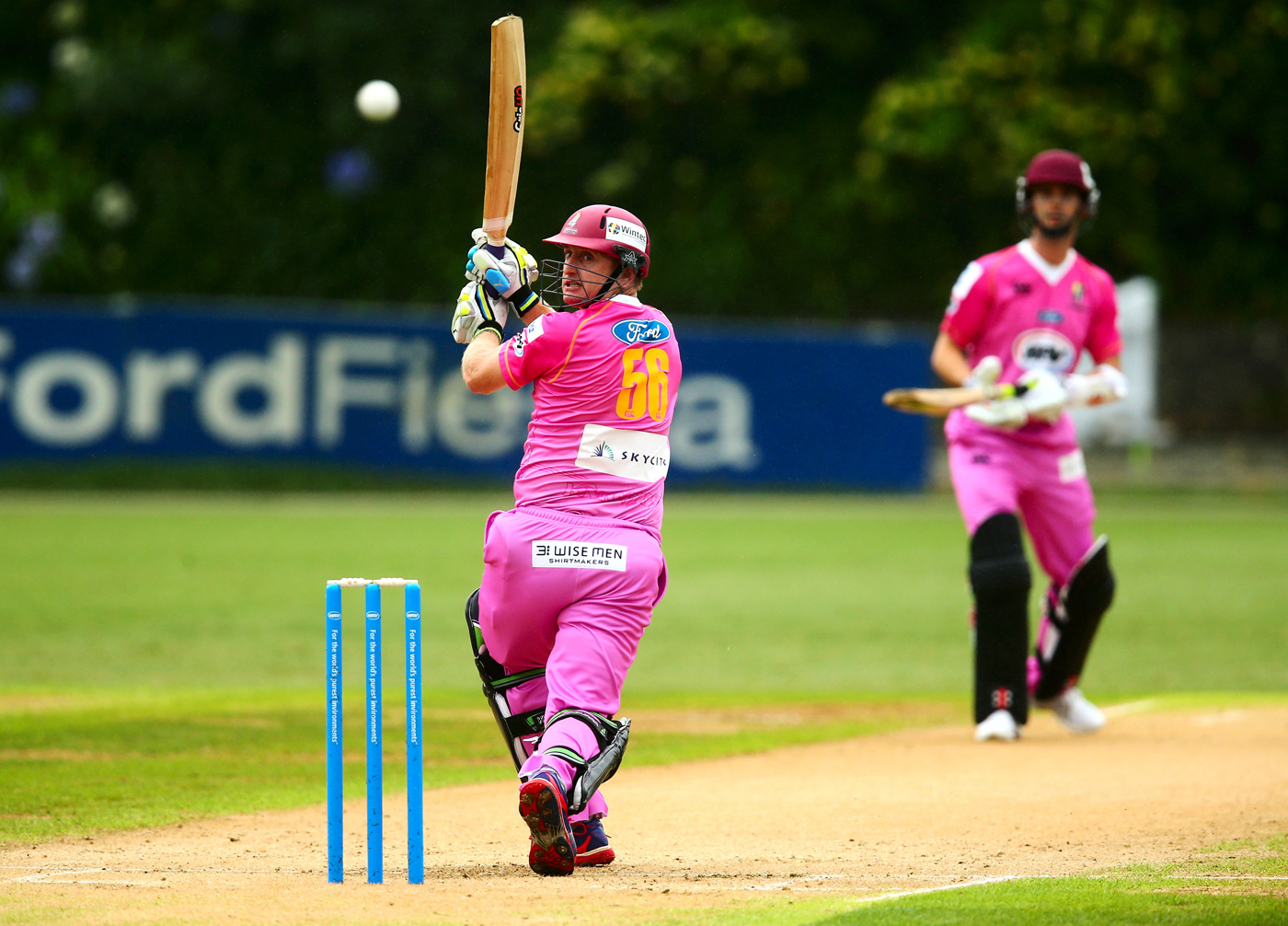 Tickled pink: Scott Styris gets his blush on in a game in Auckland in 2012 © Getty Images

Northern Knights, 2009: In the pink
Five years ago, the Northern Districts Cricket Association announced plans to put its T20 team into pink shirts as a breast cancer awareness attention-grabber.

I love how "Pig" - or Scotty Styris - has been spotted wallowing in that pink for half a decade, and is still going strong as he huffs and puffs his way around the world's T20 paddocks.

Even the sensible Northern Districts fans of Hamilton, Tauranga, Whangarei and Gisborne were excited, dressing up in pink togas and shelling out for pink merchandise. The only thing missing was the artist formerly known as Alecia Beth Moore.

I never wanted the shirt, but I like the idea. It's admirable for being more than a one-off gimmick, having become part of the fabric (sorry, I will get my coat) of the Northern Districts cricket scene.

New Zealand, early '80s: The Bruce Edgar Apparently the two-tone beige and brown is Kerry Packer's fault. He needed a dark-and-light uniform contrast for Middle Australia's plethora of black and white televisions. I'll give him the benefit of the doubt, but surely he didn't sign off on the pooh-brown colour without a smirk across his famous jowls?

But then underarm happened: McKechnie throws his bat and Edgar gives the fingers to Trevor Chappell. Snedden's already been robbed of a catch, Howarth rampages out in his socks, and Benaud is outraged. Later, Excalibur monsters a sextet of sixes and Sir Richard glides in, silky smooth. This smorgasbord of extraordinary Kiwi cricket memories is wrapped around by a common thread: tight Kiwi beige.

Aside from the underarm ball, the Bruce Edgar uniform that arrived via Daniel Vettori's £100 auction bid is the Beige Brigade's most prized possession. The beige has become an icon of Kiwi cricketing success, a hat-tip to the past and a throwback to free-to-air cricket galvanising a nation.

Paul Ford is a co-founder of the Beige Brigade and writes about cricket whenever he can. @beigebrigade The green, the gold, the great