In the beginning there was caution. Martin Crowe said, "Let there be sixes." So Mark Greatbatch hit sixes and Crowe saw that it was good. So Crowe separated Greatbatch from caution, so here was him, and the rest. And there, in a nutshell, is the Short History of Pinch-Hitting Openers.

Without Greatbatch, there was no Sanath Jayasuriya and Romesh Kaluwitharana; there was no Virender Sehwag or Adam Gilchrist. Sure, there had been top-order dashers in the past - Kris Srikkanth and Gordon Greenidge spring to mind - but never had anybody been sent out with such murderous intent.

Greatbatch, with his sturdy frame, his twitching moustache and a piece of four-by-two with SS Turbo stickers on it, did not only change the course of the 1992 World Cup, he changed the ODI paradigm. He also, all-too-fleetingly, turned a rugby country into a cricket one.

For the first time in a long time, New Zealanders embraced their team; they became the perfect reflection of how we saw ourselves as a country. We were a small nation punching above our collective weight and we were doing it through the classic No. 8 wire mentality - an ability to innovate to compensate for lack of resources.

The history of New Zealand cricket was hardly flush with success. It took 26 years and 45 Tests worth of trying until we won one. And our neighbours, Australia, held us in such disdain that they played us once in 1946 and refused to lower themselves again for a further 27 years (thanks, mate).

In the 1980s, we flew on the wings of Richard Hadlee, but it was a rare peak among the troughs. So New Zealanders learned to identify with players they felt reflected their pioneering spirit - the likes of Bert Sutcliffe, Jack Cowie and Hadlee - rather than teams. Even the one-day teams of the '80s, though successful, were based on the timeless principle of hard graft. The opening pair of John Wright and Bruce Edgar worked on the theory that 50 for no loss after 15 overs was the perfect start. The strategist: Martin Crowe shone with bat and brain in the 1992 tournament © PA Photos

These were the tactics we respected. The 1992 side changed everything. They were, by any conventional measure of talent, an ordinary team, but they captured the public's imagination through the audacity of their tactics, the sublime skills of Crowe - 29 at the time - and the big hitting of 28-year-old Greatbatch.

But it could have, maybe should have, been so different. Truth be told, New Zealand's transformation was framed by good fortune as much as it was by inspiration.

New Zealand had played a one-day series against England at home in the lead-up to the World Cup and they had played conventionally… and horribly. It was a two-horse race only in the sense that England were the thoroughbred, New Zealand the Shetland pony. The selectors approached Crowe with a view to him relinquishing the reins after just two years in the role. He rejected the overtures but was hurt.

If Crowe was, say, Picasso, what happened next would have been called the most creative period of his life. With a coach in former New Zealand wicketkeeper Warren Lees, who was happy to slip into the role of man-manager, Crowe focused on his batting and team strategy. In the World Cup opener against Australia at Eden Park, he scored an even 100 not out, but his neatest trick was to come. With Australia expecting a new-ball pace battery, Crowe fed the right-hander-heavy Australian top order the nagging offspin of Dipak Patel, with the ball turning towards the quirky arena's sole long boundary.

He then rotated the quartet of Willie Watson, Rod Latham, Chris Harris and Gavin Larsen, whose lack of pace led them to be renamed Dibbly, Dobbly, Wibbly and Wobbly. Australia never got close. Another convincing victory against Sri Lanka followed, where fate again intervened on New Zealand's behalf. Wright, New Zealand's stoic and often stodgy opener, pulled a muscle and was declared unfit for the following match, against South Africa, back at Eden Park. So Crowe turned to Greatbatch. This was a leap of faith. If New Zealand had been poor against England in the lead-up series, Greatbatch had been rancid. Scores of 0, 12, 4, 10 and 5 had left the selectors little choice but to leave him out of the opening match.

But Crowe had a deeper faith in Greatbatch than most. He was a contemporary of Crowe's at Auckland Grammar, the country's most prolific producer of sporting talent. There Greatbatch had lived in Crowe's considerable shadow, but that was okay. He told people that his goal was to become as good as Crowe, and if that sounded a little lofty - and by New Zealand standards that was a breathtaking statement of intent - his reasoning was sound: if he could only get halfway there, he would still be better than most.

So Crowe would have enjoyed thrusting responsibility on his out-of-form mate's broad shoulders, but there was the small matter of batting position. Greatbatch was a middle-order player whose stock-in-trade had been classical driving. If it hadn't been for the World Cup, Greatbatch would still have a special place in cricket history, for scoring what was - until Brendon McCullum's 302 - New Zealand's greatest back-to-the-wall century, a match-saving 485-ball 146 not out against Australia at the WACA in 1989.

"I hadn't opened until the South Africa game," Greatbatch says. "Prior to that I'd always batted four or five. They [Lees and Crowe] told me to be positive and to try to create some momentum."

The rest was history. He neutered South Africa's four-pronged and vaunted pace attack, including Allan Donald, hitting 68 off 60 balls and putting on 103 with Latham in the first 15 overs.

"There was a fair bit of adrenaline pumping," Greatbatch says. "Donald was very aggressive, all their quicks were, but when [Brian] McMillan and [Richard] Snell came on, I upped the ante. In those days four an over at the start of the innings was quick. The norm was about three. We were scoring at five or six an over and that was a real shift in momentum." Ah yes, it seems quite quaint now, doesn't it? Five an over in these Powerplay-heavy days would be viewed as pedestrian, but make no mistake, this was a game-changer. And New Zealand was in the mood to go along for the ride. Greatbatch was, quite literally, the talk of the town. Cricket was the new rugby. Eden Park, usually a desolate concrete cauldron for cricket, was full to overflowing. Saturday-morning cricket was suddenly full of openers charging new-ball bowlers. Sales of SS Turbos skyrocketed. Crowe might still have been better, but it was more fun to try to bat like 'Batch.

"The reality was, it wasn't my role to bat 50 overs," says Greatbatch, who these days coaches in Hawke's Bay on New Zealand's North Island. "My job was to create momentum so our key guys in the middle order, particularly Marty, who was in the form of his life, had time to play themselves in. There wasn't pressure on Jonesy [Andrew Jones], Marty and Ken [Rutherford] to score quickly from the get go."

Crowe and Greatbatch, with useful contributions from the rest, started flying. They didn't hit turbulence until they lost their last round-robin game in Christchurch, a match that Pakistan had to win to make the semi-finals. They met the same side again in the last four and their 262 in Auckland should have been plenty enough to win, but for the first time in the tournament the cricketing gods scowled at the home side. Crowe pulled a muscle while batting - as his runner,

Greatbatch had the misfortune to run his skipper out for 91 - and couldn't captain in the field. A young Inzamam-ul-Haq bashed Pakistan to victory and New Zealand's tear-stained lap of honour was confirmation that the ride was over.

Greatbatch, who finished the tournament with 313 runs and a strike rate of 87.92, listened to the final between England and Pakistan on a radio on the deck of his Fiji bure while he took in some well-earned R&R, but that wasn't the real postscript. This was: Greatbatch's heroics and Crowe's magnificence were not the start of something big; they were very much a moment in time. Greatbatch played out his ODI career as an opener with fleeting success until his career ended in 1996. Crowe became hostage to a debilitating knee injury and retired at 33. New Zealand cricket went into a period where it veered between hopeless and free fall, pretty much until Stephen Fleming and coach Steve Rixon pulled them around in the late 1990s.

Why did things collapse so quickly afterwards? There are many reasons, but the main one was they weren't that good to start with. They caught a wave and rode it, but all waves eventually peter out. Egos took over. Crowe became a disenchanted figure, playing out the string under a captain, Lee Germon, he didn't respect and a coach, Glenn Turner, whose dogmatic approach to life and cricket rubbed most of his players up the wrong way.

As for Greatbatch, the World Cup was probably his undoing, though in his typical heart-on-sleeve style, he would probably choose to argue the point. He was actually a much better player than a new-ball basher, but he had little choice but to play the role he had created, to continue the myth-making. When Crowe's influence waned and he became more introspective, Greatbatch effectively lost his key ally.

You hear a lot of stories about that post-'92 period from a variety of sources, and few of them are happy ones. Which is another reason we love to reminisce about '92; it helps us fans forget what came after.

New Zealand finally has a team it loves again. McCullum and Mike Hesson's side is a far more balanced team than the '92ers, but they have lost none of their pioneering spirit. However they fare at the World Cup, they will do it by daring to be different. As waves of nostalgia flooded this country via pop-up television channels ahead of the tournament, McCullum and Co might have realised just how much of that spirit they have recaptured.

And for that they might just want to doff their black caps in the direction of Greatbatch, Crowe and the spirit of '92. 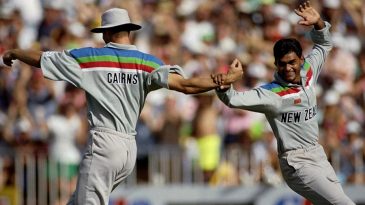 'Politicians wanted to come into the dressing room'

Gavin Larsen recalls the time the New Zealand side were the toast of the nation, in 1992 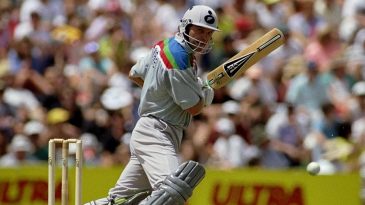 Crowe knocks out the defending champions