Up close and personal: January 1992
I'm seven years old, sitting with other children on an embankment above a school cricket ground. The field seems enormous, but with familiarity and a few years I'll realise it's not. I've just met my first two Test cricketers - ginger giant Gary Cosier, of whom I know nothing, and Shane Warne, a week on from an inglorious Test debut.

They're coaching us but right now they're also giving a demonstration, Cosier batting and Warne bowling on the centre wicket. First up, Cosier dispatches Warne further than I've ever seen a ball hit, over the fence and past rows of houses. It's probably the single coolest thing I've seen in my short life.

Until the next ball. I've never seen legspin up close but now I know because Warne gives this one an extra rip so that the ball spins violently and audibly past Cosier's thrusting blade. Cosier was our hero a second ago but now he looks like a chump. "You should have heard the ball fizzing," said the coach standing in the umpiring position. We did, all the way from the boundary.

Ball of the Century: June 1993
When you're a child there are a few authority figures you look to for certainties and reassurance in life. If you're lucky it's your parents. If you were a kid like me, perhaps you also found it in cricketers and footballers.

That's what shocked me at first about Warne's "Gatting ball" because I was too young to appreciate its technical perfection, its ominous context and its sheer beauty. Marmite-fuelled marvel: Warne exults after what is now routinely known as that ball © Getty Images

I just saw stocky Mike Gatting, greying at the temples, and so not unlike my dad or my friends' dads, grasping desperately and failing; not just that but being humiliated. As Warne launched into celebration, the earth's orbit was suddenly a mystery to Gatting. That unsettled me. Don't get me wrong - eventually I'd realise the cricketing implications of the delivery, but if Gatting didn't know what he was doing then maybe no adult did. He crumbled, so all adults did. Sport and life suddenly felt so different.

Basit for dinner: December 1995
Many have been the theses that - as well as being a peerless practitioner of his craft - Warne had an ability to mentally outmanoeuvre batsmen before they had even taken guard. Often this approach was entirely lacking in subtlety and nuance, but damn it if it wasn't fun to watch. Warne's a bit of a ham these days. We should have seen that one coming.

Basit Ali stood there patiently before Warne's final ball on the third day of 1995's Sydney Test - watching, waiting as the bowler ostentatiously conferenced with Ian Healy about the exact specifications of the finale. That or they talked about what was for dinner. It doesn't really matter. Basit might have used his bat, I suppose, but he also just looked powerless to prevent his demise. It was cheesy, it was predictable, but what I wouldn't give to watch it again for the first time.

Warne's genius also unlocked the best in cricket's vernacular. "You wouldn't believe it," said Richie Benaud, "he's done him between his legs."

Psyched out: January 1994
It's both the physical and psychological domination. Imagine being so confident, so cocky and so good that you allowed a batsman success for tactical purposes. Warne does it here with a decoy flipper. Daryll Cullinan pulls for four. Benaud senses it. He calls it the minute Warne bowls the first one. "Well… that looked to me to be the one Warne shows them. You could almost pick that from up here." Really, Richie? Really. 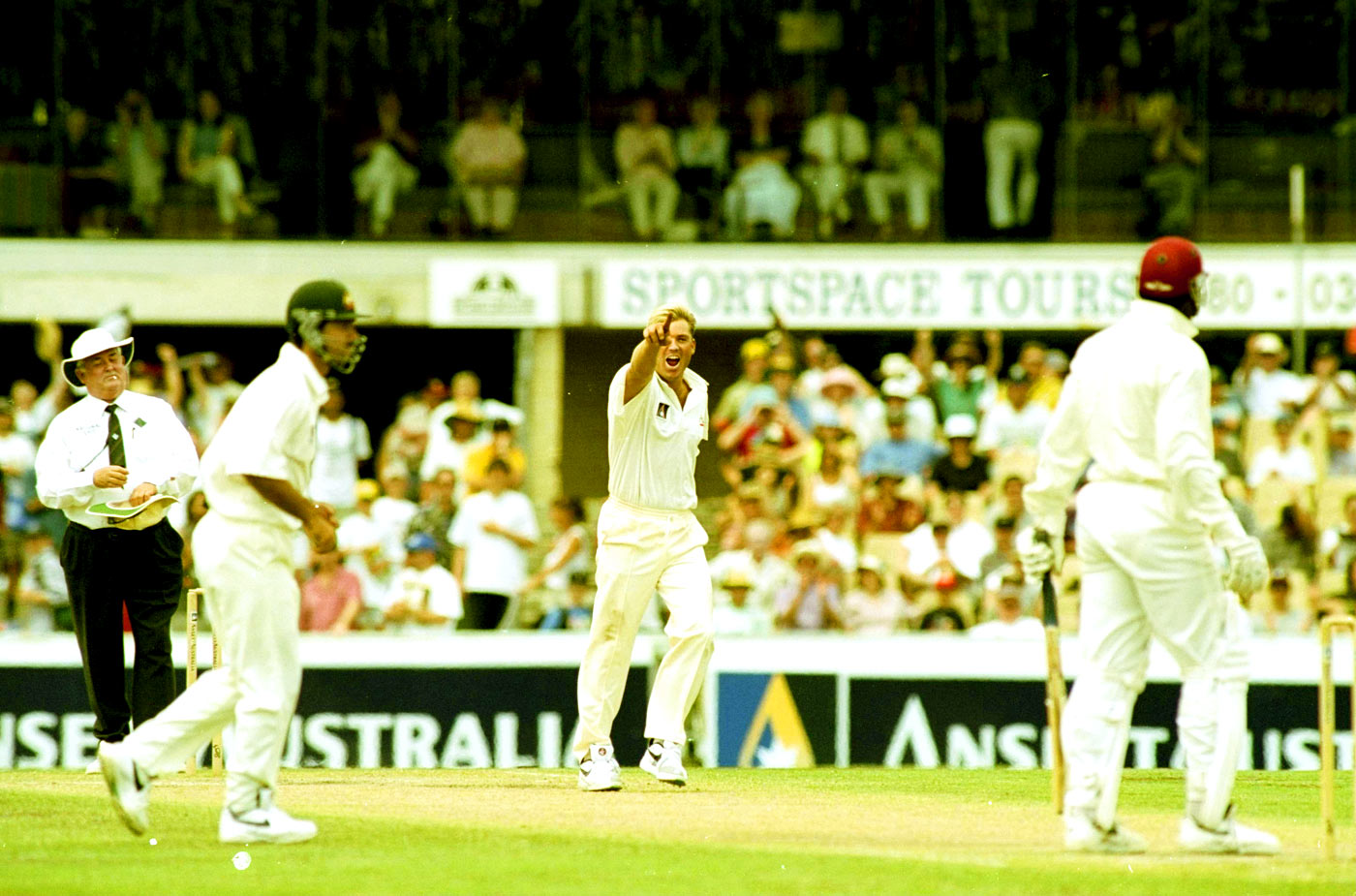 Pavilion's that way, mate: after getting rid of Carl Hooper in Sydney, 1996 Shaun Botterill / © Getty Images

Now there's a legbreak. Cullinan cuts it for four more. Maybe this isn't so bad after all. He's actually looking good. He's looking even better to Warne, though, who has him exactly where he wants him: buoyed by the confidence of minor victories, and thus more inclined to yield to his own momentum and attacking instincts.

Now comes the real flipper, the one Cullinan can't even hope to read. It's impossible to imagine worse footwork - two or more decisions in a split-second, all wrong - and then his stumps rattled. Not only has Cullinan been burgled, he has helped the thief load up the getaway car.

The classic: December 1996
Warne's in his 46th Test now. Time enough, perhaps, for us to have grown a little complacent about the shapes, angles, torque and trajectories he would produce from a cricket ball.

It's the SCG Test, late in 1996, and he produces perhaps his sharpest-turning wicket-taker: the legbreak that screams out of the rough a couple of feet outside off stump, then veers back into Shivnarine Chanderpaul's pads and onto off stump.

This is why replays exist. My brother and I get home from school and go wild when we see it in the evening news promos. The VCR is put to work because we know we'll want to watch it over and over, which we do. There's something a bit odd, though. Chanderpaul is Warne's 216th Test victim, but in the immediate aftermath, just seconds after his fall, Ian Chappell focuses mainly on Chanderpaul's error. There it is: we just expect these things of Warne now.

Russell Jackson is a cricket lover who blogs about sport in the present and nostalgic tense for the Guardian Australia and Wasted Afternoons. @rustyjacko