What's in the March issue of the Cricket Monthly 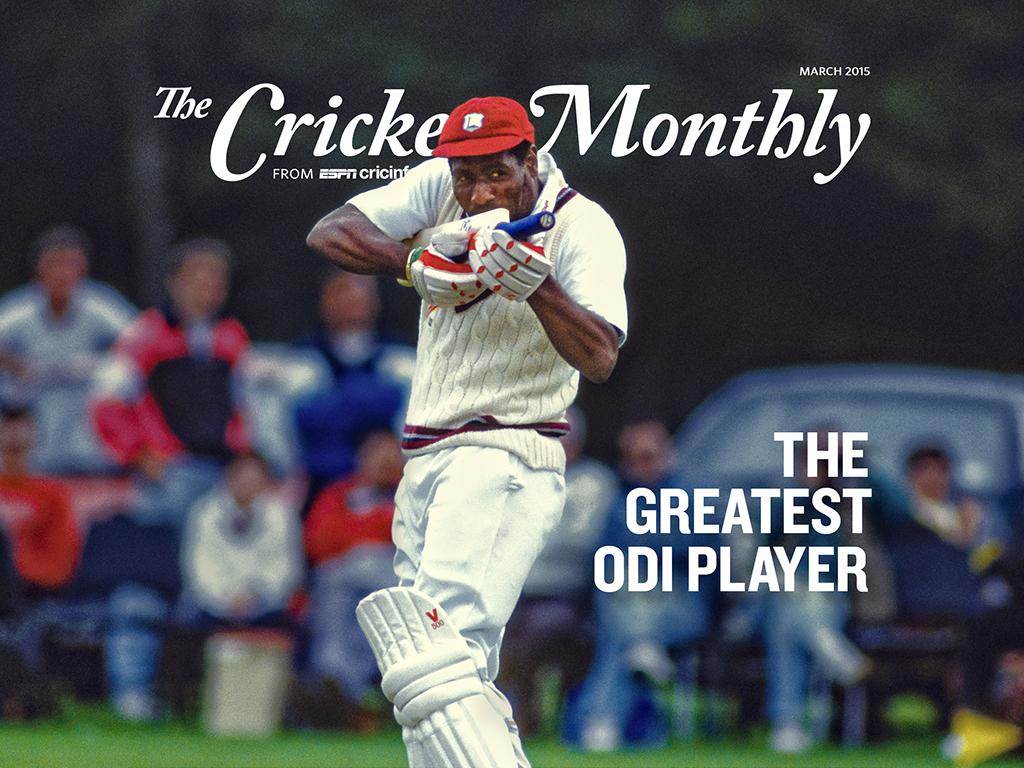 In the freshly minted March issue of the Cricket Monthly:

The best over fifty overs
Fifty jurors apply their wits to the vexing GOAT question - and deliver a unanimous verdict. It's Vivian Richards. Read the full results; sparkling arguments for Tendulkar, Akram, Gilchrist and Dhoni by Suresh Menon, Osman Samiuddin, Ed Cowan and Ed Smith; and a majestic tribute to Richards by Martin Crowe.

He had a mesmeric way. You couldn't take your eyes off him, watching him cough and snort, tap his bat handle with disdain, snort and cough, wink, laugh and stare. Oh, that stare. Those hawk-like eyes, the windows to his soul. Man, he wanted to win so bad. No one I ever played with or against wanted it that bad.

'The first thing is to think aggression'
Sidharth Monga sits Viv down to discuss domination, duelling and one-day cricket. "Some folk would think that a fast bowler would be always the more intimidating and getting more respect," Richards tells him. "I wanted to prove that necessarily don't have to be the case." Bonus: five bruised bowlers recall the King's royal pastings, from Lord's to Jamshedpur.

"I felt strong, you know. I felt strong about my presence, you know. I always believed, anything you do there is a certain amount of presence involved. Sometimes presence sends a message, 'Hey, I am ready.' The game of cricket, even though there is 11 folks involved on the field, when the bowler runs in, that's six balls at you. It's just the duel between you and the bowler." 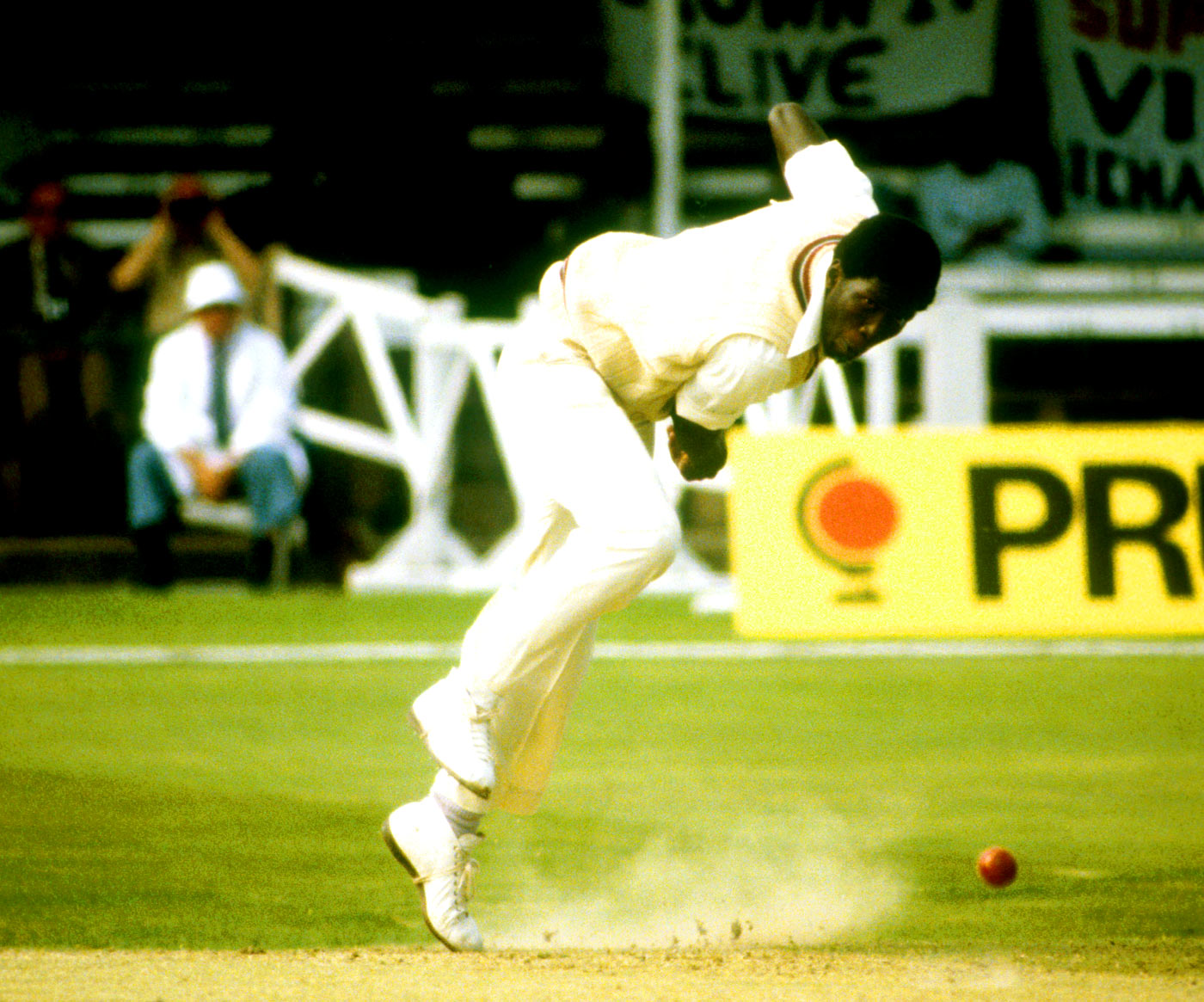 "I remember an England team meeting when we were discussing how to score off him," Boycott writes in The Best XI, "and Ian Botham said, 'You don't, nobody does.' I asked, 'What about when he bowls to Viv Richards in the nets in Somerset?' Ian said that even Viv couldn't hit Joel and I thought, 'On that note I'll go to bed before I get even more demoralised.'"

The lion's fairy tale
Andrew Fidel Fernando rewinds to 1996 when a bunch of part-time bank clerks, insurance men, and salespeople - led by a towering leader - scripted one of the great underdog stories. Along the way Jayasuriya loses a bet, Duleep Mendis loses his cool and Pushpakumara loses the plot, but Sri Lanka win the World Cup.

Ranatunga had only one request for de Silva the batsman. "You get us a hundred, that's all. You win us the World Cup." In the whole operation, imagined over years, put together over many months, de Silva's was the only free hand. His was the only talent Ranatunga did not limit by the bounds of his own imagination. New England rising
Gary Ballance, Chris Jordan and Sam Robson were born in three different continents, thousands of miles from Lord's. Their accents may betray their heritage, but in more ways than one, the three are the face of New England. What does their journey mean for the future of English cricket? Daniel Brigham finds out.

Angus Fraser, the former England fast bowler who is now an England selector and managing director at Middlesex, doesn't believe that world exists anymore. "You can't persuade someone of their nationality, it's a very personal thing," he says. "I think people who say you have to be born in England to feel pride to represent your country, I think that's wrong. I know that playing for England meant more to Allan Lamb, Robin Smith and Graeme Hick than it did for some Englishmen."

Michael Bailey looks to the future
Aboriginals in Australia have endured a long history of discrimination. Michael Bailey, the Indigenous Cricketer of the Year, seeks inspiration from the past. Tristan Lavalette speaks to Bailey, and gets the story of one of those inspirations: John McGuire, who racked up 10,000 runs in Western Australia's district cricket without being given a first-class break.

"Mum hid something from me and I went through her wardrobe in an attempt to find it," Bailey recalls. "I found photos of her dad... my grandad… and he looked Aboriginal. I questioned her and she revealed the truth. My grandad was full-blooded Aboriginal but died in the Vietnam War when my mum was very young. She had wanted to wait until my siblings and I were older to tell us the truth."

Wide boy
Of the four men sent to jail in 2011, Mazhar Majeed's story was the one nobody heard. Vivek Chaudhary made multiple trips to a Sussex prison to change that, and found there a man difficult to know, shielded by an inflated sense of self-worth.

One of the biggest challenges was dealing with his expectations. "I've heard Yuvraj Singh got $100,000 for his book," Majeed told me at the start of one of our meetings. "Mine should be worth as much as this, if not more."

26 all out
Sixty years ago, England arrived in New Zealand, on the ascendant, riding high on the destructive abilities of Frank Tyson and Brian Statham. The hosts were weak but nobody realised just how low they would descend: to a score that is still the lowest by a team in a Test innings.

Bert Sutcliffe: "At that time the New Zealand internal service was operated with DC3s, fine aircraft, but not swift by recent standards. This traveller, a very keen cricketer, started his flight about the time we started our innings. The pilot was good enough to pass back messages to him, giving him the score at frequent intervals. Long before he had covered the 500-odd miles to Auckland, the game was over."

The internet of my youth
A trip to Brazil rekindled Jayaditya Gupta's love for radio commentary, transporting him back to a time when Brian Johnston, Tony Cozier, Lala Amarnath and Richie Benaud ruled over the airwaves, when superlatives were rare and storytelling paramount.

The BBC's Peter Jones had the misfortune of commentating on English football's greatest tragedy, the Hillsborough crush of 1989, in which 96 people died. The match was abandoned but he continued telling the story as it unfolded before his eyes. His final report that evening summarised the day's events in a flat monotone; there was a brief pause before he ended: "… And the sun shines now." Tune in: to a time when there was magic in the airwaves © PA Photos

BC Pires writes an anguished letter from Barbados.

Simon Barnes on rising to the occasion.

The match that changed the great Graeme Pollock's life.

Leander Paes on his cricket heroes.

Bowlers galore in Shot Stories and the photo feature.