To hell with the Associates?

A tweak here, a tweak there and voilà - a better World Cup for all

There has been much gnashing of teeth, wallets and administrative boards over the format of future cricket World Cups. Many fear the sport will be cutting off its nose to spite its face by contracting its showpiece event to just ten teams. Others claim cricket will be able to replace this self-severed nose with a new golden nose that is far superior to a conventional nose, with the added bonus of being unable to smell the dank whiff of sporting injustice.

The general consensus seems to be that neither the format used in the last two World Cups, nor that currently slated for the next edition, is ideal. Or even close to ideal. Some would go further, and suggest these formats are, for different reasons, certifiably unhinged - what other sport seeks either to shrink its boundaries or deliberately minimise the excitement of its leading event?

Cricket has always struggled to find a satisfactory solution to the twin problems of not having a sufficient quantity of top-level competing nations (anything between nine and 15 presents mathematical difficulties), and the primeval, elemental desire to host a tournament that lasts a ridiculously long time for no good reason (and at least one bad reason).

When commissioned to propose a range of options for 2019 and beyond, therefore, I initially planned to list the pros and cons of various formats. However, there are too many possible configurations - ranging from the scheduled ten-team retrenchment, to a 128-nation Wimbledon-style knockout (which works for tennis, but might arguably stretch cricket beyond the natural depth of its talent pool), and from the resurrection of the recently used 14-team marathon to the simple supplanting of all international cricket with an expanded baseball-style 162-game Indian Premier League season.

Therefore I present one option, and one further stipulation, on the grounds that the proposed ten-team version has flaws so patent and sizeable that they instantly outweigh any possible benefits (such as the guaranteed meetings between big teams; the need for teams to play well throughout; and the 47 days for cricket fans to clock off from predicted 2019 global events such as the war between the USA and Antarctica, an impending asteroid strike, the inauguration of Giles Clarke as the first President of the Northern Hemisphere, and wondering whether Kevin Pietersen will be recalled to the England side).

Proposed format (proposed, I am sure, by plenty of others before me): Revert to the 2011 and 2015 system, with one minor but significantly tournament-enhancing modification. Fourteen teams, in two groups of seven, but instead of four teams from each group progressing, only the top three go through. The first-placed sides advance directly to the semi-finals, while the second-placed teams in each group play off against third-placed teams from the other.

In a sport that has always had a limited number of participating nations - a boon in many ways, allowing the evolving narrative of recurring rivalries - and has done little to nurture newcomers, a month to whittle down 14 teams to eight quarter-finalists was designed to minimise jeopardy and excitement. A curious course of action for a sport competing in a ferocious marketplace with a 21st-century attention span. Only a heroically prolonged marathon of ineptitude by England prevented the eight highest-ranked teams (and eight oldest Test nations) from all reaching the quarter-finals for the second successive World Cup.

If only three were to progress from each group, it would ensure that teams have to play well from the start. Losing one match would be a significant blow rather than a minor inconvenience to be forgotten about over several weeks before the important matches begin. Losing two could have major ramifications. After groping around in the dark for most of the group stage of World Cup 2015, England had no business being in with a chance to make the knockouts © Getty Images

In this year's World Cup, England were surgically clobbered by Australia, viscerally disembowelled by New Zealand, and euthanised by Sri Lanka's batsmen with curious ease. Any team in any sport that had played so persistently disastrously deserves to be eliminated. Yet all England needed to qualify was win their match against Bangladesh, a team that has never been ranked in the top seven in ODIs, then defeat newcomers Afghanistan. In the end, the former part of that challenge proved beyond England, but the inadequacy of the format was clear. A competition that allowed such failures to go essentially unpunished was deliberately damaging itself.

This slightly modified format would maintain the current number of Associates, encouraging the sport to expand, and offering hope to cricket's newer participants, but would also at a stroke resolve the major problem of the 2011 and 2015 tournaments - that absence of competitive importance from so much of the first month (yes, month) of action that has given recent World Cups the gathering excitement and accelerating momentum of a tranquilised donkey in a hammock.

The number of knockout matches would be reduced from seven to five, but on an extremely jaunty flip side, the number of group-stage matches whose results genuinely mattered would increase markedly - teams would be fighting for qualification from the start, and even those on course to make the top three easily would have a significant incentive to finish first.

The most leaden-headed advertiser would surely see that as an improvement to benefit their product. The most accountancy-headed administrator would surely concur.

The one stipulation I would make is that, regardless of the format, the length of the tournament is capped at 36, maybe 37, days - starting on a Friday or Saturday, finishing five weeks later on a Sunday. The maximum number of overs a bowler could bowl would be 90. Today's scientifically honed hyperathletes should be able to cope with that. This is a sport, after all, that expects them to play five-Test series in the same time span as they currently play World Cups.

Cricket has a chance to pick up the baton from the last two almost-good World Cups. It can create a tournament that can be inclusive, dramatic and engaging throughout. It might need to choose to acquire a little less money to achieve it, however, which might prove to be as great a challenge as finding a format for a sport that has moved beyond having eight decent teams, but is nowhere near having 16. Logistics, you are a worthy foe. 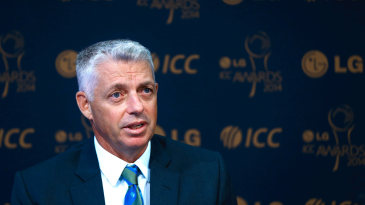 'World Cups should be played between evenly matched teams' Cricket to become a private club

At its annual conference this week, the ICC is set to shed much of the inclusiveness it has strived for at the global level in recent years, with India, England and Australia firmly at the helm