It is July 1998. I am 13 years old and watching cricket on the TV in my grandparents' house in Manchester. The Test between England and South Africa is being played a few miles away, at Old Trafford. Jacques Kallis scores his second Test century and takes four wickets. England cling on for a draw.

It is August 2003. I am 18 years old and watching cricket on the TV in a caravan in Wales. It is raining, as it has been on every day of my holiday. But it isn't raining in Leeds, where Jacques Kallis takes nine wickets in the match to win the Test for South Africa.

It is December 2004. I am 19 years old and at home for the university holidays. A day after the horror of the South Asian tsunami, the cricket is irrelevant. England are in Durban, where Jacques Kallis scores his 18th Test hundred. The Test is drawn.

Fast forward to January 2010. I am 24 years old and watching the Cape Town Test in a London pub with my workmates. We extend our lunch break beyond all reasonable explanation, spellbound by Dale Steyn tormenting Paul Collingwood. England's resolve earns a draw. In the first innings Jacques Kallis hit his 33rd Test century.

Finally, it is December 2013. I am 28 years old and enjoying Christmas with my fiancée in Suffolk. Days later, I discover that South Africa beat India in Durban, and in his last innings Jacques Kallis scored 115. It was his 45th Test century.

Jacques Kallis has been a colossus for almost all of my cricketing life. For two decades he was a familiar, unyielding obstruction for his opponents, and especially for the England teams I supported. His was also a triple threat. If you knocked over his stumps, he would come back and get you with the ball, or he would wrap one of those giant paws around the ball at slip. But unlike other familiar English foes in the '90s and noughties - Shane Warne, Graeme Smith, Muttiah Muralitharan - Kallis was never given much affection from the fans. We accepted that to win we would have to overcome him, but took no pleasure in his achievements.

Unlike Warne, he did not win games through force of personality. Unlike Smith, he did not overcome obvious technical limitations. Unlike Murali, he did not play with a smile on his face

Now that his international career is over, this seems sad. After all he scored more Test runs than Brian Lara, Kumar Sangakkara and Sunil Gavaskar, and took more wickets than Michael Holding, Graeme Swann and Richie Benaud. Few have made a bigger contribution to Test cricket through the ages. Many have played more stylishly or been more innovative, but few have done more on the pitch.

So why do I feel so cold towards Kallis? Unlike Warne, he did not win games through force of personality. Unlike Smith, he did not overcome obvious technical limitations. Unlike Murali, he did not play with a smile on his face. Instead, he was the Prince of Orthodoxy, both in technique and temperament. His bowling was accurate and nagging rather than rapid and explosive. He played with the straightest of bats, other than when he flexed those giant biceps and crashed a short ball away.

But mostly he remained a cold-blooded cricketer. The temptation to go to a century with a six was not for him. He played - T20 forays aside - low-risk cricket. He possessed immense obduracy and patience. These traits filled the void where his personality, his joie de vivre, should have been.

This, then, is the Kallis equation: textbook technique plus cool head equals deadening cricket. Throughout my life, Kallis coming to the wicket has been a signal to head to the bar or put the kettle on. He was not going to give his wicket away, and nor was he about to score a chancy boundary. Instead, he was going to dig in and begin another epic innings of painfully correct tedium. It is telling that after 20 years in the spotlight, Kallis is widely known for his regard for his numbers. That, and for his hairpiece.

Apologists suggest that Kallis wasn't the self-motivated accumulator many take him for. Rather, he was instructed to provide a base for the flighty dashers around him. Given that his early team-mates included men of granite like Gary Kirsten and Hansie Cronje, I find this hard to believe. And then there is the hair. We can forgive Warney and Swanny and Tuffers for their vanity, as they brought charisma to their cricket. We cannot say the same for Kallis. Instead it merely added to the air of self-regard that surrounded him.

These observations are made from a distance. Despite his ubiquity in the cricket of my life, I have never met or interviewed him. Nevertheless, indications are that he was no different off the field than on it. In his autobiography Matt Prior describes the aftermath of an England one-day defeat to South Africa in which Kallis took wickets and played the match-winning innings. The England players licked their wounds with beers around the pool, much to the dismay of coach Duncan Fletcher who spotted Kallis "pounding away on the treadmill in the gym for half an hour as if he had done nothing all day". In an essay titled "One Man Team" published in the Australian, Gideon Haigh suggested that Kallis' double act with Mark Boucher - "What are you drinking Jacques?", "Oh, whatever Bouch is having." "What would you like to eat, Jacques?", "Bouch?" - was a great source of amusement to the South Africans. But it doesn't reveal anything about Kallis that we didn't already know. Or rather, it confirms my suspicions. There isn't much to Kallis besides his cricket. He was an all-round automaton.

This is why every profile makes references to his numbers. There is an absence of anything else to write about. And it is perhaps because of this that the numbers are so big. He played cricket, and when he wasn't scoring runs he was taking wickets. And if he occasionally did neither, he would catch your edge at slip.

This kind of monomania is difficult to love, but easy to respect. So let us remember Kallis' Test career in the most appropriate way - numerically, and without a flicker of emotion: 13,289 runs at 55; 292 wickets at 32; and 200 catches. 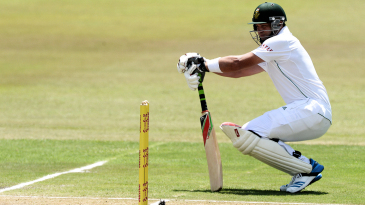 Where would South Africa be if Kallis hadn't played the way he did?

Remembering the man who made modern South African success possible Kallis a standard-bearer for a nation

He made South Africans proud and he made the rest of the world stand up and take notice. He played at the highest level for 18 years and was the beating heart of many fine teams Over a Test career that lasted 18 years, there were hardly any boxes that Jacques Kallis did not tick