Cheers to change: Tendulkar two days before his first match as the first Yorkshire player born outside the county

For the love of county

Few things speak of the English summer as the County Championship. To celebrate its 125th anniversary, here are the five most memorable seasons

1890: The first Championship
From 1873, several counties had started playing ad-hoc matches across the summer. There was no formal league, and the title of champions was awarded by popularity, much like a prize-winning marrow at a village fete.

A points system was introduced in 1890 - a point for a win, minus one for a defeat, nothing for a draw. Gloucestershire, Kent, Lancashire, Middlesex, Nottinghamshire, Surrey, Sussex and Yorkshire were the founding fathers, and on May 13, WG Grace led his Gloucestershire side in to bat with his brother Edward against Yorkshire at Ashley Down, Bristol. It was the first County Championship match, and Yorkshire did what they would mostly carry on doing for the next 125 years - winning, by eight wickets.

It wouldn't all go their way, though. After 14 matches Surrey were the champions, led by the 113 wickets of blue-eyed George Lohmann - who, like Grace, could bowl medium-pace spinners to devastating effect - and the 704 runs of pocket-sized Bobby Abel, whose unbeaten 357 against Somerset in 1899 remains Surrey's highest score 116 years later, out of reach of Hobbs and Sandham, of Barrington and May, of Thorpe and Stewart, of Ramprakash and Butcher.

1957: The Invincibles
The greatest Championship side of all time? A few can lay claim: Yorkshire of the 1930s, powered by the record-breaking openers Percy Holmes and Herbert Sutcliffe; the Yorkshire side that collected seven titles between 1959 and 1968; or Middlesex, led by Mike Brearley, who won four Championships in seven seasons from 1976 with a meticulous balance of spin, pace, style and substance.

But in this land of giants there is one that looks down on them all. Surrey's seven consecutive titles in the 1950s - an era that was a rare peak for English cricket - remains one of the greatest periods of dominance in domestic cricket. From 1952 to 1958 they won 121 out of 196 matches, as Laker, Bedser, May, Stewart and Barrington made imprints in history. Of all of their titles, 1957 was their most dominant. They started their season as they meant to go on: with an innings victory over Glamorgan. Only 11 times in 55 innings did Surrey's opponents pass 200, and never 300. The champions won 21 of their 28 matches, nine by an innings, and took the title by a staggering 94 points.

1984: The closest finish
The final round of matches: reigning champions Essex won their game inside two days against Lancashire at Old Trafford. It put them top, but their attention turned anxiously to second-placed Nottinghamshire, facing Ian Botham's Somerset at Taunton. A win for the visitors and the title would be theirs.

Chris Broad and Tim Robinson put on 70 for the first wicket, while Paul Johnson, Richard Hadlee and Bruce French added rapid 20s. But when Clive Rice was caught by 12th man Richard Ollis for 98, it appeared the game was over. That was until Mike Bore, in at No. 10 but more a No. 12, hacked them closer.

The final over of the season, 14 needed, one wicket in hand: Bore hit the first two balls, from Stephen Booth, for four, and then collected two. Four from three. The fourth, blocked. Then, on the season's penultimate delivery, Bore launched Booth towards the stands, towards the title. It dropped just short, into those pesky hands of Ollis again. The title, by a couple of feet, was Essex's. And how did they thank Ollis? The following season, John Lever had him caught for a duck. 1992: Enter Sachin
Has there ever been a more photographed sportsman than Sachin Tendulkar? Not just the iconic shots but the millions taken by fans and curious onlookers as the autograph era crossed over into the smartphone era. Out of this vast catalogue, there is one that retains its discordant power even now: Tendulkar, 19, a bat in his right hand, a pint of bitter in his left, a brown flat cap upon his head, a Yorkshire tracksuit keeping the English chill out.

Yorkshire had been without a title since 1969. Things had to change, and it began by bringing to an end their policy of only picking players born within the county's boundaries. This meant, for the first time, Yorkshire were searching for an overseas player. Craig McDermott was chosen but he was injured ahead of the start of the season. So they signed the best young batsman on the planet.

Courteous, charming, polite, with a gaggle of girls who would turn up wherever his sponsored car - a Honda Civic - was parked, Tendulkar gained instant respect in the dressing room.

Despite top-scoring in his first two Championship matches with 86 and 92, Tendulkar struggled in a damp early summer. In August the runs started to come, and across five days he hit his two centuries for Yorkshire - 107 against Lancashire in the Sunday League and, in the Championship, a match-winning hundred against Durham. Yorkshire finished third from bottom but Tendulkar topped 1000 runs, and finished the season by inviting the entire squad to his wedding in Mumbai. We'll take the points, you take the match: Phil DeFreitas bats for Derbyshire against Hampshire in 1999 © PA Photos

1999: The end of one division
After 109 seasons, one became two. Small scale (rather than sweeping) change is part of the Championship's breathing apparatus. So when it was announced that the 1999 season would be the last with a single division, it felt as if a hacksaw had been taken to the final vestige of the Victorian era.

There was, of course, strong opposition. But two divisions would mean elite v elite and an end to the graveyard of dead games. The top nine at the end of the season would form Division One in 2000 and the bottom nine would become the great unwashed. Inevitably the final round of games produced a mid-table scramble between Sussex, Warwickshire, Hampshire and Derbyshire that involved declaration bowling, accusations of cheating, and suspicious pitches.

Sussex captain Chris Adams, whose side finished on the wrong side of the dividing line after being bowled out for 99 by Warwickshire on the resultest of result pitches at Edgbaston, accused his opponents of "blatant cheating" and that they "deserved to be relegated". He got his wish. With that game over in two days, Derbyshire and Hampshire, facing each other at Derby, knew exactly what was required. The home side needed just two batting points, eventually achieved after Hampshire batsman Giles White made a suspiciously rare bowling appearance. Hampshire achieved the win they needed by just two runs, booking their place on the County Championship's brave new frontier.

Daniel Brigham is a sportswriter and editor. @dan_brigham The work that is county cricket

Players toil all season, but fans don't really get a sense of the scale of effort involved 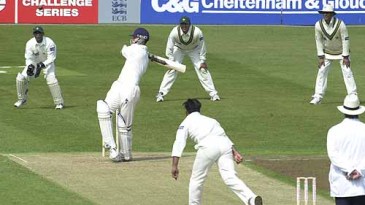 A Derbyshire fan in Melbourne

How books, magazines and live scorecard updates allowed an Australian teenager to keep track of county cricket in the 1990s A county game to savour