It was decreed: Kapil after the 1983 World Cup win

The art of the inevitable

I was at the headquarters of the London Marathon the other week, interviewing Paula Radcliffe for ESPN, when I bumped into my old friend Andrew Longmore. Naturally we made time for the quickest of quick beers. And he waved his glass at me in a purposeful manner and spoke these words.

So he did. It concerned game seven of the 2014 World Series. The game was in Kansas, where San Francisco Giants had a precarious 3-2 lead over Kansas City Royals*. The winner of the game wins the World Series. Anyone's title, then. The Royals narrowly favoured to move ahead and win.

Bumgarner had already pitched two winning games in the series. The last had been two days earlier; you rest your pitchers by giving them entire games off, just as you rest fast bowlers by sending them down to long-on for an hour or two.

But astonishingly Bumgarner came out in the fifth inning to pitch again. And it was like the headmaster walking into an unruly classroom and calling the world to order. Andrew again: "From that moment the result was completely inevitable. All the players knew it, everyone in the crowd knew it. You couldn't explain it, but it was obvious. There was no other possible outcome."

India's total of 183 wasn't going to trouble them - in fact, I think to this day that if India had scored, say, 50 more, West Indies would have won

Bumgarner pitched a five-innings shut-out and the Giants won. Picture him: the archetypal pitcher. Big, six-foot five, and with preposterously long levers. A lefty: huge mitt on the right hand. A pitching action in which he wound himself up like a cathedral clock. A great mudflap of hair at the back of his cap. Fierce beard. A love of confrontation. A spooky intensity: his nickname is MadBum.

And he was not just unplayable, he carried an air of genuine authority. He took command of time and place. And long before his first pitch - right from his studiously modest walk and jog to the mound - he made it quite clear that no result other than a Giants victory was possible. It was 3-2 when he stepped out, 3-2 at the finish.

So I had a think about the Longmore Theory of Sporting Inevitability and looked for more examples. Plenty of sport is inevitable enough: generally when a very strong team or individual is competing against a much weaker one. That happens all the time, and obviously it doesn't count.

It isn't sporting inevitability, in the Longmore sense, when Chelsea beat Leicester City 3-1, or when Australia beat United Arab Emirates. To qualify, the result has to be seriously in doubt, or even profoundly unlikely - and yet it is affected by an air of inevitability, so much so that it seems the players are taking part in a ritual, their moves long rehearsed.

So here's another classic example of sporting inevitability: the World Cup final of 1983. It was extraordinary enough that India made the final, but no one gave them a chance against West Indies, who were at the very peak of their abilities at the time. India's total of 183 wasn't going to trouble them - in fact, I think to this day that if India had scored say, 50 more, West Indies would have won. Instead, West Indies were almost insolently confident as they came out to bat. Viv Richards swaggered out and began a lazy destruction of India's dibbly-dobbly medium-pacers. And then came that famous moment when Richards, on 33, top-edged Madan Lal. The Indian captain, Kapil Dev, ran back towards the boundary, seemingly with his head on back to front as he locked on to the ball. The ball, as if guided by laser, found his hands, which gave gracefully and gratefully as they felt the ball's weight. Kapil had run 20 yards and still made the catch look easy.

From then on, proceedings took on an air of serene inevitability. West Indies panicked, Clive Lloyd got out, also caught by Kapil; India were in the end comfortable victors. And cricket was never the same again.

So I tried again. "Frankie. That seventh race."

This was one of the most remarkable days in the history of horse racing. It was the British Festival of Racing of 1996: a top-quality card. There were seven races: Frankie Dettori rode the winners of the first six. So far so extraordinary: but it was at this point that the meeting moved into the realms of sporting inevitability. Dettori's mount in the last race was Fujiyama Crest. Before the race Dettori described the horse: "A 12 or 14-to-1 shot with too much weight who is hopelessly out of form."

But Dettori, high beyond reach after all those winners, did the outrageous thing and set the pace. With the horse almost all in, Dettori somehow smuggled him home over the last 100 yards to win.

This was all so inevitable that punters on the course and across Britain backed the no-hoper down to 2-1. Everybody felt that inevitable vibe: everybody but the bookmakers. They took all the bets they could because they saw only the facts: that Fujiyama Crest has no chance. They reckoned without the sense of sporting inevitability, and it cost them around £50 million. A good few had to go out of business: just punishment for those who fail to recognise the extraordinary forces we are talking about here.

Here's another example from American sports. This was Super Bowl 1989. Cincinnati Bengals were leading San Francisco 49ers 16-13 with just over three minutes left. The 49ers gained possession 92 yards from goal. And it should have been game over, it really should have. But then the 49ers quarterback Joe Montana walked into the huddle "like John Wayne", as one of his team-mates was to say.

I was in the stadium for that one, and it was just the same as Andrew's Bumgarner moment. There was a sudden sense that the impossible had at a stroke become inevitable. I knew it, both teams knew it, everyone in the stadium knew it even if they pretended otherwise.

Montana worked his way up the field in a series of brutally accurate passes. There was no Hail Mary hit-and-hope stuff: it was all direct, purposeful and to the point. The 49ers turned down the possibility of a tying field goal and went for the lot: and - inevitably - they got it with a brusque, flat bullseye of a pass from Montana to John Taylor.

So we'll have one more to complete the set to five: another from cricket, this being the Cricket Monthly. And that's Headingley 1981: one of the great legends of Englishness, more or less the foundation myth of Old England. And it brings us two sorts of sporting inevitability, one after the other.

The first came when England, following on against Australia, 227 runs behind, were 135 for 7. Ian Botham suggested to Graham Dilley that they "give it some humpty". And suddenly the glorious counterattack moved from outrageous to inevitable: the ball finding the middle of the bat as if preordained. Botham finished 149 not out.

The next day Australia had to make 130 to win. A formality. At 56 for 1 it was all over. But then Bob Willis changed ends and in a trance of excellence he took 8 for 43. It seemed that the Australians were aware that they had their part to play in all this: and it was the part of losers. 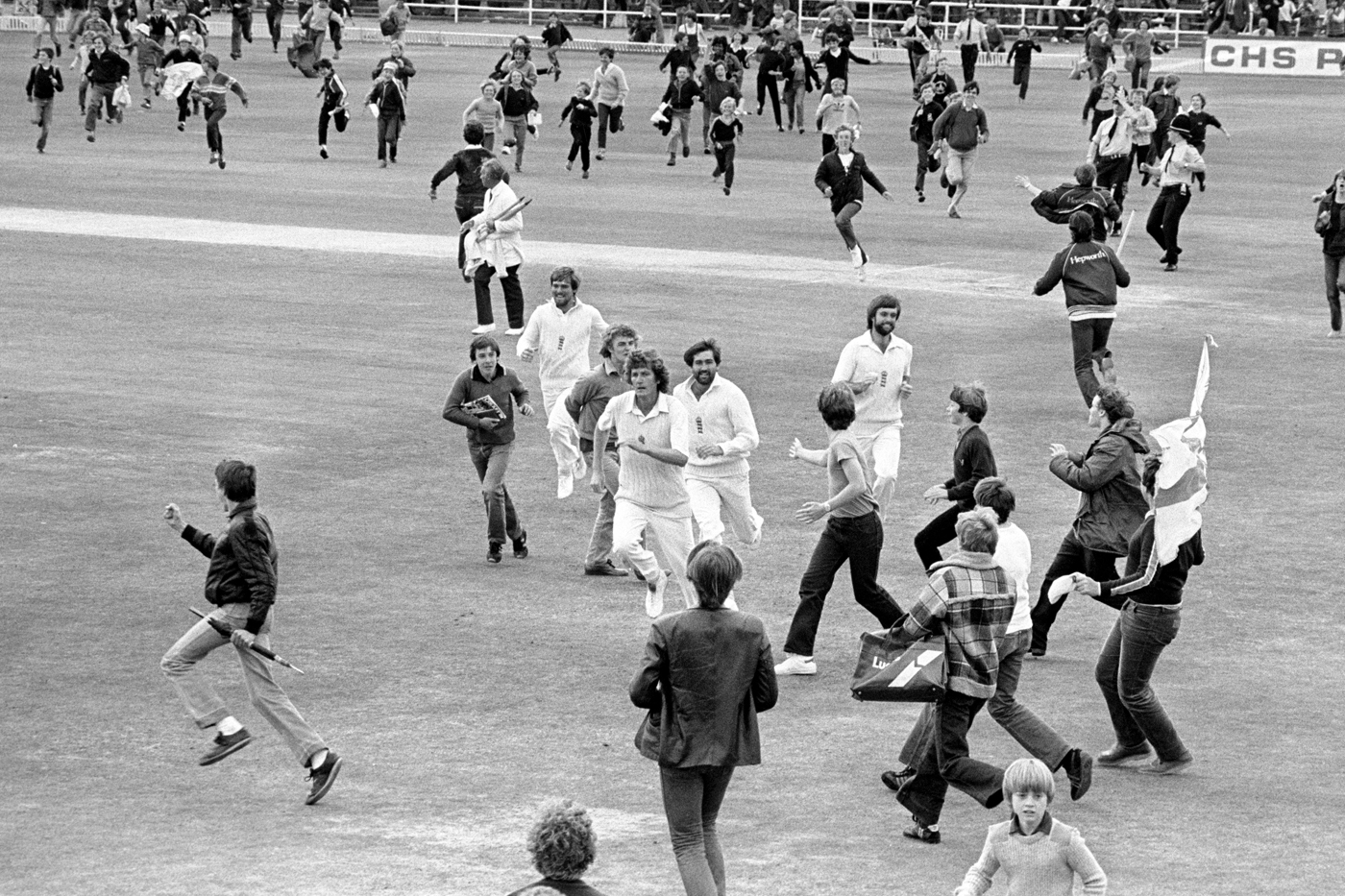 Willis and chums flee the scene after the win at Headingley, 1981 © PA Photos

In one way it was the most outrageous upset, but in another it was as if it had all been long planned. You could see that in Botham's joyous face, his love of have-a-go defiance, his taste for the improbable; you could see it in the blank face of Willis in his bubble of concentration, unable to celebrate each wicket, unable to celebrate much even at the end.

But then why should he? It was just inevitable.

So sport will occasionally send us these rich and impossible things: times when the inevitabilities of classic drama seem to obtrude on the field of sport. Sport is more or less defined by the notion that no one knows what will happen next… and yet there are times that you do: times when normal rules seem to have been suspended and it seems that the losers are complicit with the winners and that everyone shares the same certainty that there can be no outcome other than the truly improbable.

But all in vain. And something inside them knew it. That's because, in the shifting, changing, unpredictable and always volatile action of sport, there come times when the forces of sporting inevitability take over. And there's nothing anyone can do. 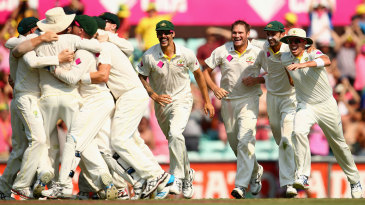 A series in which writers explore the game through a word. First up: momentum Christopher Martin-Jenkins on the epic Headingley Test of 1981