Against Malcolm in 1994, the rest of South Africa were history; not Cullinan

Daryll Cullinan's focus was intense and downward as his left foot landed a metre behind the halfway line at the ramshackle ground that was then called the BRU, or the Border Rugby Union. He held the ball in both hands, arms floating forward. As his right leg uncoiled like a bullwhip he dropped his carefully cradled cargo onto the anointed spot on the turf ever so artfully. A bounce and a blink later Cullinan delivered his foot to the ball, struck with a compelling thump. As the oval orb disappeared towards the goal 50 metres away, languidly tumbling end over end, he stood motionless and watched through eyes narrowed to slits.

Cullinan had no doubt that his drop kick would sail high, straight and handsome between the uprights. And it did. But he wanted to stop and smell the sweetness of the moment. As he stood there, having lifted his moon-like face to the setting sun, clad in the all-white strip of the Queen's College first XV, where he played fly half, still a schoolboy but already famous for breaking Graeme Pollock's record as South Africa's youngest first-class centurion, he shimmered in the afterglow of the autumn afternoon.

High on a splintery bench in the grandstand, another schoolboy, this one as unknown as Cullinan was known, looked on from amid a throng of his peers, all of them frozen in awe. I was that schoolboy and some 30 years later the instant remains trapped in the amber of my memory. It was my first sight of Cullinan and I hoped with a heart beating as madly as it dared that there would be many more.

Happily there were. But only a few before he ditched the backwater of East London for the brighter lights of Cape Town and the bigger contracts offered by Western Province. And then there were none for a few years until we pitched up at Cullinan's solo training session at Buffalo Park to welcome him back to Border - after he had left Cape Town for Johannesburg, played eight Tests, and been the rabbit in Shane Warne's headlights - only for him to admonish a newspaper photographer for doing his job.

"You need to ask my permission to take pictures of me," he said from behind those narrowed eyes.

A year after that, Cullinan leaned into the press box at Buffalo Park, called my name sharply, and reeled me towards him using his index finger as a rod.

The previous day, playing against a Northern Transvaal team that included a mediocre left-arm spinner named Murray Krug, he had scratched around for almost three and a half hours before being run out for 49. Cullinan, I wrote in a national Sunday broadsheet, had "batted with the yips" when facing Krug.

He protested that the pitch was difficult and that Krug had bowled a negative line. Then he jabbed my chest, narrowed his eyes, and hissed, "How many first-class matches have you played?"

I reached for the only reply I could think of: "How many first-class matches have you covered?"

A photograph of one four, a James Bond cover drive, made the front pages the next day. I stared at it for who knows how many minutes

It was a bizarre conversation, not least because about a year earlier, at The Oval in August 1994, Cullinan had played like a man in a galaxy far, far removed from his team-mates to score 94 in a total of 175. While Devon Malcolm was rattling the bejaysus out of the rest of the South Africans, and taking 9 for 57 in the bargain, Cullinan was a fireproof mast standing tall on a burning deck, attacking everyone who dared bowl to him, hitting a dozen dazzling fours. A photograph of one, that James Bond cover drive, made the front pages the next day. I stared at it for who knows how many minutes.

Cullinan's was the only wicket Malcolm did not take that day. The truth was that even in his finest hour as a Test bowler Malcolm didn't deserve to. For me, then a junior reporter who didn't cover Cullinan's diamond of an innings, it remains among the handful of performances I regret not having witnessed first-hand.

At Buffalo Park our hands remained firmly unshaken. Cullinan clambered down the stairs and skulked all the way back round the ground to the dressing room beyond the opposite boundary. And that was where we remained for the rest of his playing career - me wondering how a man whose cover drive came like a comet could be bothered by mild criticism; him no doubt allowing his thoughts to swing low when our paths crossed.

Another reporter must have irritated Cullinan even more. "Just seen Daryll in the corridor," he once said breathlessly with flushed cheeks. "He wanted to box..." Polly who? Cullinan walks off the ground at Eden Park in 1999, having made 275, breaking Graeme Pollock's long-held South Africa record © Getty Images

Thirteen years after our prickle in the press box Cullinan was fired as a television commentator in the middle of a Test series against West Indies. His appointment as coach of Kolkata Tigers in the rebel Indian Cricket League was the reason given for his fate, but more than a few wondered whether his criticism of South Africa's fielding in that series was not closer to the truth of the cause.

Like most cricket boards that indulge in the ethically questionable practice of hand-picking commentators, Cricket South Africa does not brook anything like critical thinking from those who know where their bread is buttered. Cullinan was a clear and articulate voice that sought no one's favour as it cut through the grey noise burbling all around. Clearly those who dole out careers in exchange for unconditional approval were not going to put up with him for long.

Not for the first time, Cullinan had caught my attention. He was worth listening to, asking questions of, and having his views published as far and wide as possible. The hard truths of life after cricket seemed to have sharpened his mind and focused his energies. In a media game soaked in sycophancy he spoke as straight as he had once played.

Time had mended the fences between us, I discovered: he was happy to take my calls, to respond to messages, to speak his mind. And I was happy to have him do so.

I still am. For an opinion devoid of jargon that pays no heed to what others are saying, I call Cullinan. In fact, I have to stop myself from calling him for almost every story. It is not that I agree with all his views or that I think he is the only authority that matters. It is that he does not force his thoughts through some safety filter before expressing them, and that he understands the importance of not doing so. It is that he is unafraid.

Just like he was on a golden autumn afternoon in East London all those years ago. Then, he split the uprights with an outrageous drop goal. Now he splits nonsense with common sense not at all common.

And he has even covered a few first-class matches.

Telford Vice is a freelance cricket writer in South Africa 'Batting is a life of torment'

The batsman's art is one full of self-persecution, obsession and satisfaction. Martin Crowe and Daryll Cullinan discuss 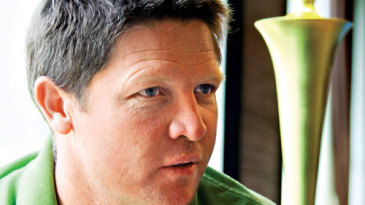 'Sport was our life'

On growning up a child prodigy, being South Africa's next big thing ... and fronting up to Shane Warne