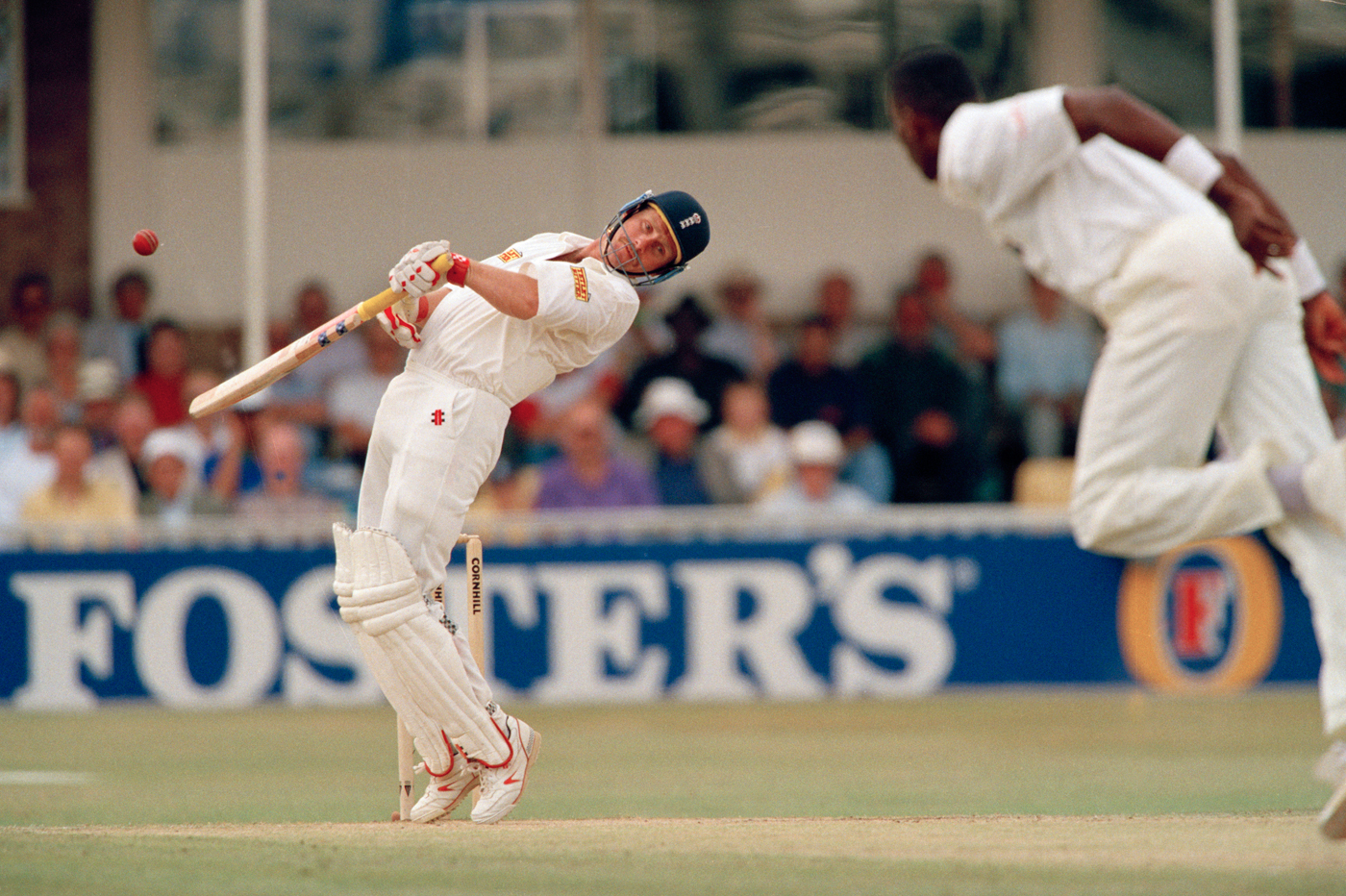 Do the limbo: Smith v Bishop

Robin Smith v West Indies, Edgbaston 1995
It's a myth that England has just discovered S&M. It was on TV often in the first half of the '90s, and before the watershed too. Robin Smith was 50 shades of black and blue on a number of occasions after being assaulted by West Indies' sadistic fast bowlers, and he relished every bruise. When he was batting, it was clear why "machismo" is a near-anagram of "masochism". He was addicted to the challenge and the adrenaline rush of a cricketing joyride, and did not care for conventional notions of pain. "What's the definition of pain?" he said. "Pain for me is blokes I know getting bayonets stuck into their thighs and calves during the Rhodesian war."

Yet even Smith had a pain threshold, just about. When he was batting against Courtney Walsh and Ian Bishop at Edgbaston, the bounce was so nasty and unpredictable that Smith wore a visor for one of the few times in his career. He also says it was one of only two times he was in the zone. He made 46 and 41 in totals of 147 and 89 and batted 300 minutes in the match, which was over before lunch on the third day. In total, England only lasted 372 minutes. Smith's captain Mike Atherton, who knew a few things about courage, later said it was the bravest batting he saw during his career.

Yet Smith was an indestructible hero with porcelain confidence, and could be brought to his knees by more insidious forms of bowling; he was "physically scared facing Shane Warne". In a sense, he was the point at which old and new masculinity meet and, for my teenage self, an introduction to the nuances and complexities of adulthood: the strong, silent, insecure type. There have been few more fascinating cricketers.

Smith's insane courage was so stirring that his sheer skill at playing fast bowling is sometimes forgotten; not so much his defining square cut but the suppleness and reflexes that allowed him to jerk away from bouncers like a limbo dancer a millisecond before they reshaped his face. For a young and essentially cowardly England cricket fan, there was no greater vicarious thrill, and no greater hero.

Haynes, usually the relatively sober partner to Gordon Greenidge, went off like a pacemaker, hitting four fours and a six in an innings Wisden called "delightful"

Desmond Haynes v India, Jamaica 1983
Batting needs its own inflation calculator. The pace of scoring has increased so much this century that we need a tool to tell us exactly what historical innings are worth. A good example is Desmond Haynes' 34 from 21 balls in West Indies' stunning victory over India. His scoring rate does not look that spectacular to modern eyes, but it was 22 years ago: at the time it was the fastest recorded innings of 20 or more by an opener in a Test.

It sparked one of the great steals, West Indies' version of the miracle of Adelaide. At tea on the final day India were 168 for 6, a lead of 165. Then Andy Roberts took four quick wickets and the captain Clive Lloyd told his side to go for the runs, an instruction that verged on the anarchic in the climate of the time. Haynes, usually the relatively sober partner to Gordon Greenidge, went off like a pacemaker, hitting four fours and a six in an innings Wisden called "delightful".

As word spread around Kingston that something magical might be happening, the crowd grew. That meant there was an appropriate audience for an innings that Viv Richards, despite some extremely stiff competition, regards as his favourite: a storming 61 off 36 balls, made with a broken thumb. West Indies won with four balls to spare. The chase of 172 is still the fastest of over 100 in Test history, and looks pretty impressive even without an inflation calculator. AB de Villiers v Australia, Adelaide 2012
The moment I realised AB de Villiers could do anything was when he did nothing. His monastic 33 from 220 balls, which helped South Africa to an epic draw, was a masterpiece of apparently effortless self-denial. A man who can hit any ball to any part of any ground did not hit a single boundary. At 220 balls, it's the longest boundary-less innings in Test history. (Oddly, the fourth longest was also played by a man called de Villiers in Adelaide: Fanie lasted 170 balls for his 30 in January 1994.)

We often refer to the oxygen of runs, yet really runs are more like food - you can survive without them for far longer than you realise, but that is rarely evident in a modern culture of impatience and instant gratification. De Villiers showed what can be done if you train your brain accordingly. For his next trick, six days later, he smashed 169 off 184 balls to win the series.

Winston Benjamin v Pakistan, Barbados 1988
The word "immaturity" can have positive connotations too. Ask any West Indies fan who was at the Kensington Oval on April 27, 1988. Pakistan, the only team to consistently stand up to the great West Indian side of the '80s, led 1-0 going into the third and final Test. West Indies' proud unbeaten records - 53 years in Tests in Barbados, 15 years in a series at home, eight years in a series anywhere - were about to disappear. In a medium-scoring scrap they were 207 for 8, needing 266 to win, when Winston Benjamin came to the crease.

Benjamin only realised the size of his achievement when he got to the dressing room and found his captain, Viv Richards, in tears

The situation was pretty fraught; Abdul Qadir, exasperated when Jeff Dujon survived a huge bat-pad appeal, had just punched a heckler. Benjamin was 23 years old, playing his fourth Test. His immaturity was a blessing, because he had not fully grasped the significance of what was going on. And even that which he did understand did not faze him. Positive visualisation comes instinctively to the young.

Benjamin reversed the usual relationship between junior and senior partner. While Dujon held up an end, he tucked into Qadir, slog-sweeping and straight-driving sixes out of the ground, one of which injured a passer-by. He learned to pick Qadir - kind of. He heard the wicketkeeper Saleem Yousuf say "legbreak, googly, flipper", and repeated it to himself. (Qadir became so exasperated by the umpires' failure to read his flipper and give lbws that he told them in advance when he was going to bowl it.)

It was off a pre-picked googly that Benjamin smacked the winning boundary. He had made 40 from 72 balls in a partnership of 61 with Dujon. He only realised the size of his achievement when he got to the dressing room and found his captain, Viv Richards, in tears. 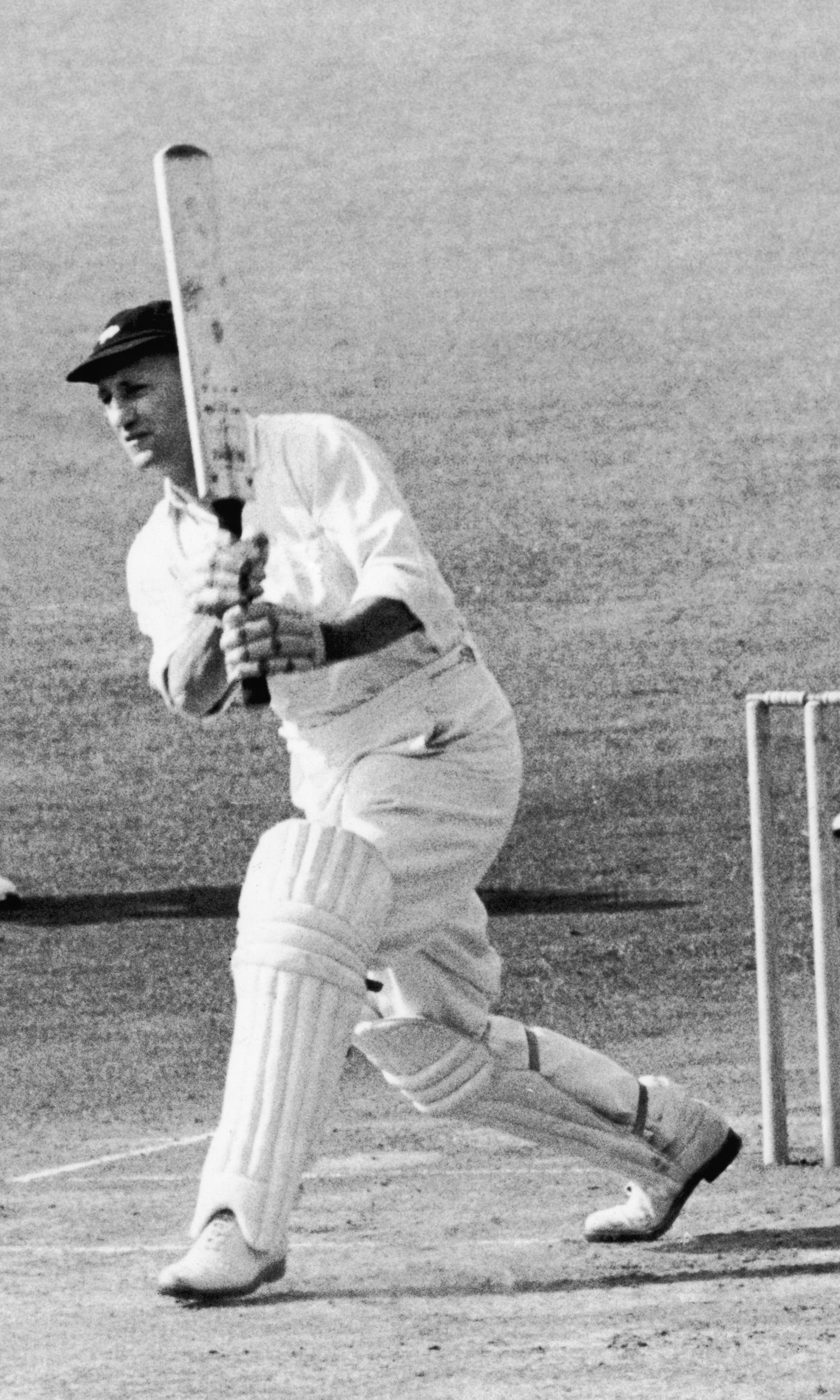 Hutton could be Trumperesque when the mood took him © Getty Images

Len Hutton v Australia, Sydney 1946
For such a numbers-oriented game, cricket has always had a keen eye for the qualitative ̶ perhaps never more so than during this Test. Don Bradman and Sid Barnes both made 234 each in Australia's innings victory, yet all most people were talking about after the game was Len Hutton's 37 in 24 minutes, an innings drenched in glory. Neville Cardus, in the Guardian, said it "elevated a match of mass production and utility to the realms of fine art".

It may have been fine art, but it also had cult appeal. Those who saw it talked about it until their dying day; so did many of those who didn't. A young Harold Pinter heard about it on the radio, and it became instant serotonin. "Sometimes, when I feel a little exhausted with it all and the world's sitting heavily on my head, I pick up a Wisden and read about Len Hutton's 37 in 24 minutes in Sydney in 1946."

Hutton took Keith Miller and Fred Freer to the cleaners, driving and pulling with exhilarating authority, until, off the last ball before lunch, he accidentally hit his own wicket. His innings lived fast and died young. "This," wrote Cardus, "was a crying shame, challenging justice and philosophy." Many who saw the innings cited Victor Trumper. On this occasion, none were accused of blasphemy. And nobody wanted to look at the data afterwards. 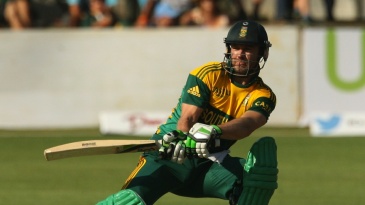 AB de Villiers may come across as something of a fictional superhero on the field. But his relatively underplayed fallibility off it shows that he is human too 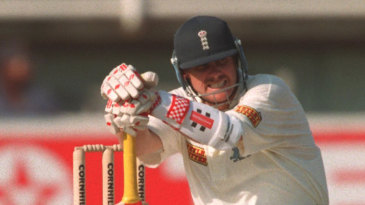 'Playing in the West Indies was always the best'

The South African-born England batsman, 47 today, remembers being pelted by the fastest bowlers in the world, being reduced to tears by the management, and more 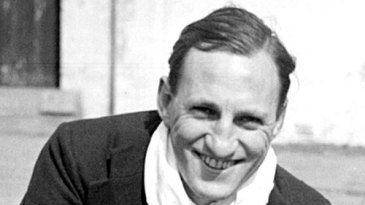 The head and spine of England's batting

Even as those around him struggled, Hutton batted on as if on the flattest pitch in the world