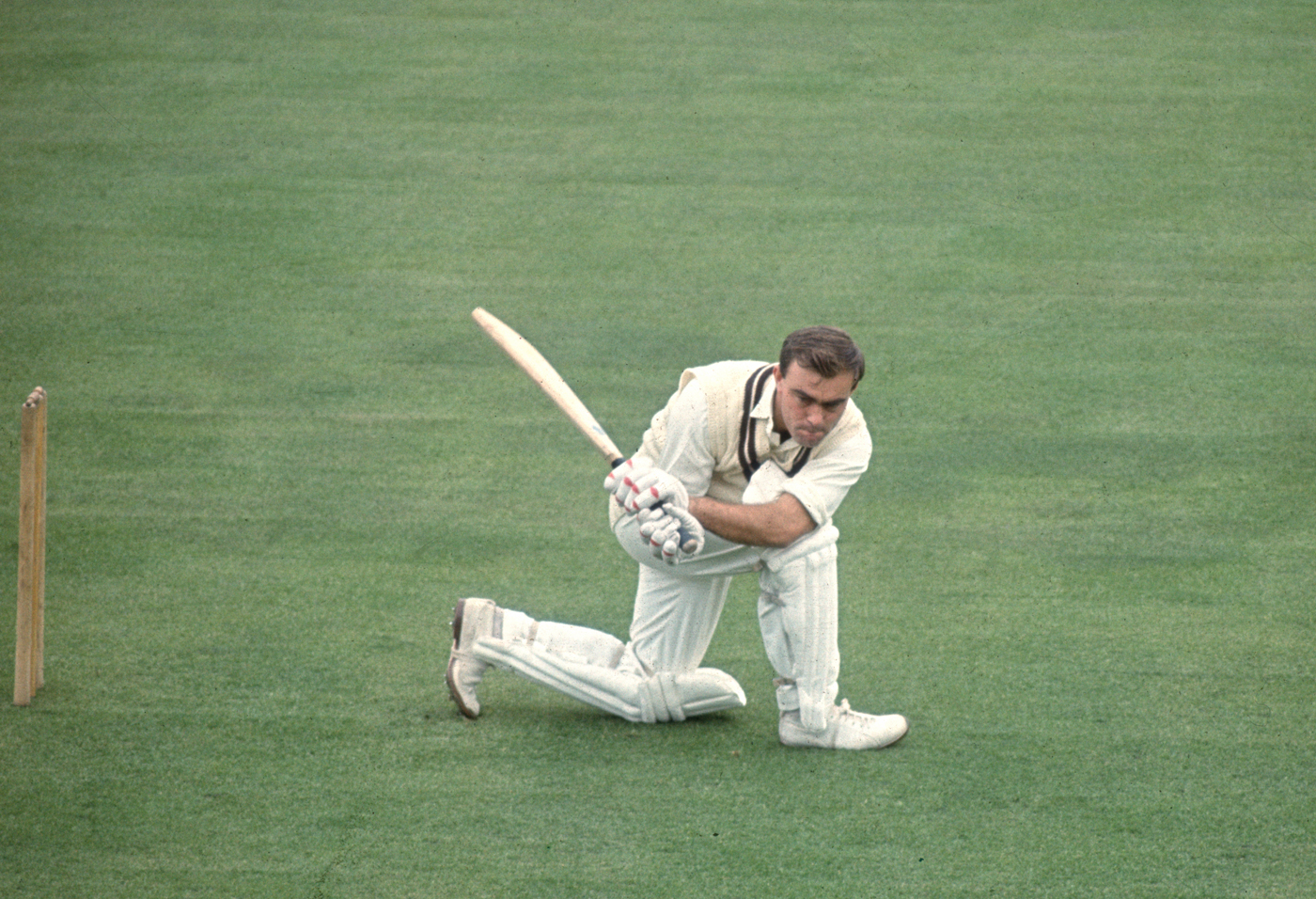 Edrich bats for his county in 1966

A grump among the punks

John Edrich was a legend at Surrey but when he captained a team of young pretenders, he was cast adrift

It came from a team-mate, out of the blue, sometime during the summer of 1972.

"He thinks you're on drugs, Butch!"

"He thinks you're on drugs!"

"He" was the man who sat in the corner of the Surrey dressing room, surrounded by a veritable copse of County Sports cricket bats. He was a hero of Ray Illingworth's Ashes winning team in Australia in 1970-71; he was the gutsy left-hander who had become England's Mr Reliable and was soon to take over the Surrey captaincy from Micky Stewart.

He was John Edrich.

I was battling to make a career in county cricket and my soon-to-be captain thought I was on drugs. Great.

I must tell you, reader, that even in the golden age of the hippy, I had not been close enough to a joint to even "not inhale", and the only pills I took were antihistamine or anti-inflammatory. In the spirit of the age I liked my rock music, liked to wear my hair long, and my clothes were not the standard blazer, tie and slacks. I was quite relaxed, I suppose, and even now people tell me I can be a bit vague at times; but that's just me. On the field I felt I was committed and determined. I was not always successful but I was only 18 and county cricket was hard.

And so began a relationship of the kind that Cat Stevens must have had in mind when he wrote his great song "Father and Son"; a classic case of the much respected father figure not "getting" the young pretender, and vice versa. I was not the only young Surrey pretender disaffected at the time, and despite a good start to Edrich's regime in 1973 and a Benson & Hedges Cup win in 1974, things at The Oval began to unravel.

It must have been a difficult time for people of a certain age in the late '60s and early '70s, particularly in the pretty conservative world of English county cricket. Edrich had made his debut for Surrey in 1958 after doing two years national service. Fourteen years on and England must have felt like a foreign country. A world slowly recovering from the Second World War was suddenly hit by an explosion of self-expression. Rock music, psychedelia, counterculture, Vietnam War protests, student riots, and allegedly, free love, would have made England seem a world away from the post-war austerity of his childhood. The self-discipline imposed by national service and by elders who had experienced the tyranny of war clashed with what he must have thought of as the self-indulgence of the new generation of Surrey players. His natural allies from the '60s, Mike Willett and Ron Tindall among them, had retired: he didn't appear to have a special rapport with the other senior players and, from where I stood, struggled to relate to the younger ones. He was cast adrift.

We were terrible. I was terrible. And I blamed the captain. There was disillusionment, there was lack of understanding, there was confusion, and yes, at times hatred

John was, of course, by some distance our best player. His skill, courage, concentration and sheer dedication to scoring runs is well documented, and even during this time, he commanded respect from his team. It was hard to have watched him and Brian Close repel that brutal West Indian assault at Old Trafford in 1976 and not be filled with admiration. However, as time went on it became clear that tactically and temperamentally he was not suited to the captaincy. He rarely showed any empathy toward players, and we became accustomed to the sight of him, hands on hips, kicking the turf in disgust when a youngster bowled a half-volley. Playing cricket became a joyless exercise to the point where the team looked forward to John joining the England team when Arnold Long took over the Surrey captaincy.

Accordingly it was not long before the senior players called a secret meeting to discuss the possibility of ousting John from the captaincy. It is said that a dressing-room mole informed Edrich and he turned up at the meeting where Robin Jackman explained the dissatisfaction and asked him to resign. Giving up was not in Edrich's make-up and predictably he refused. This prompted Long to leave The Oval for Sussex, followed soon after by Geoff Arnold. We now had to move forward without our best bowler and, in Long, the man that most players wanted to play under.

What followed were two of the most miserable seasons of my career, finishing third from bottom in 1977 and second from last in 1978. We were terrible. I was terrible. And I blamed the captain. There was disillusionment, there was lack of understanding, there was confusion, and yes, at times hatred. At a charity evening featuring London sportspeople at the Players Theatre, John and I were being interviewed and I was asked in front of a full house what it was like to be captained by an England legend.

"Terrible!" I replied, to much amusement.

I quickly followed up with "he's too hard, too strict", but "terrible" was what I had meant.

John must have felt as much frustration as I did. He was a fixture in the England team until 1976 and had played with many high-quality, disciplined cricketers. We didn't approach those skill levels and had our moments of indiscipline. When Ian Payne and I returned to our Oxford hotel after pressing the gamble button following a bad-weather forecast, we stumbled into reception singing Electric Light Orchestra's "Telephone Line" at the top of our voices. At breakfast next morning a grumpy captain asked, "Who was making that bloody awful noise last night?"

Payney and I thought we had been pitch-perfect, with killer harmonies. So we were confident it wasn't us.

"I know it was you, Alan" - he always called me Alan when he was angry - "because I'm in the room next to you! You better get some runs today. It's about time." Ouch!

Later that season, versus Kent at Maidstone, Raymond Baker and I took a stroll around the ground towards the close of play on the first day. We were invited into a hospitality tent where we drank a couple of pints before Ray remembered he was nightwatchman and sprinted off to the dressing room. Sure enough a wicket fell and Ray strode to the crease to join the skipper. He played one or two shots more expansive than a nightwatchman should, and called his partner for a quick single off the first ball of the final over, which saw a startled and furious Edrich scramble home by millimetres. Yes, he had a right to be frustrated with us.

In recent years our roles as tour hosts for travel companies have thrown us together. I've enjoyed his company immensely. He obviously knows the game inside out and has a no-nonsense approach. He has a sense of fun too; my first wife remarked more than once that "he has a wicked twinkle in his eye!" He was far from humourless in his playing days, although his question to me on his return from the Australian tour of 1974-75 was a curious one.

"Have you ever batted pissed, Butch?"

How to answer? Was it a trap?

"I have. In Sydney against Thommo and Lillee. It was great. It didn't hurt when it hit me! You should try it!" 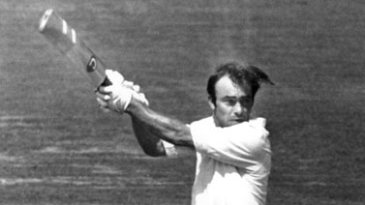 Saturday's first one-day international between England and Sri Lanka passed in a blur of indifference, as most of the home audience was transfixed by the latest round of football World Cup matches. But it hasn't always been thus 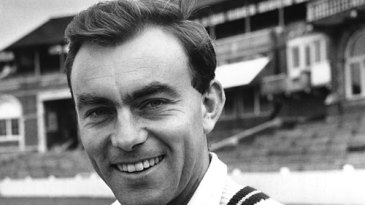 Batting for Surrey against Derbyshire at The Oval on July 12, John Edrich became the seventeenth cricketer, and only the third left-hander (Phil Mead and Frank Woolley were the others), to complete one hundred first-class hundreds 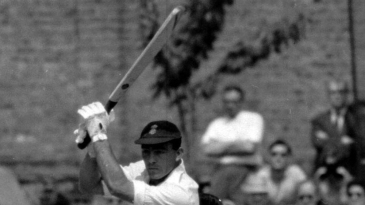 Among the pioneers of enterprising batsmanship during the past decade the name of John Edrich, the solid, diminutive Surrey left-hander, stands high