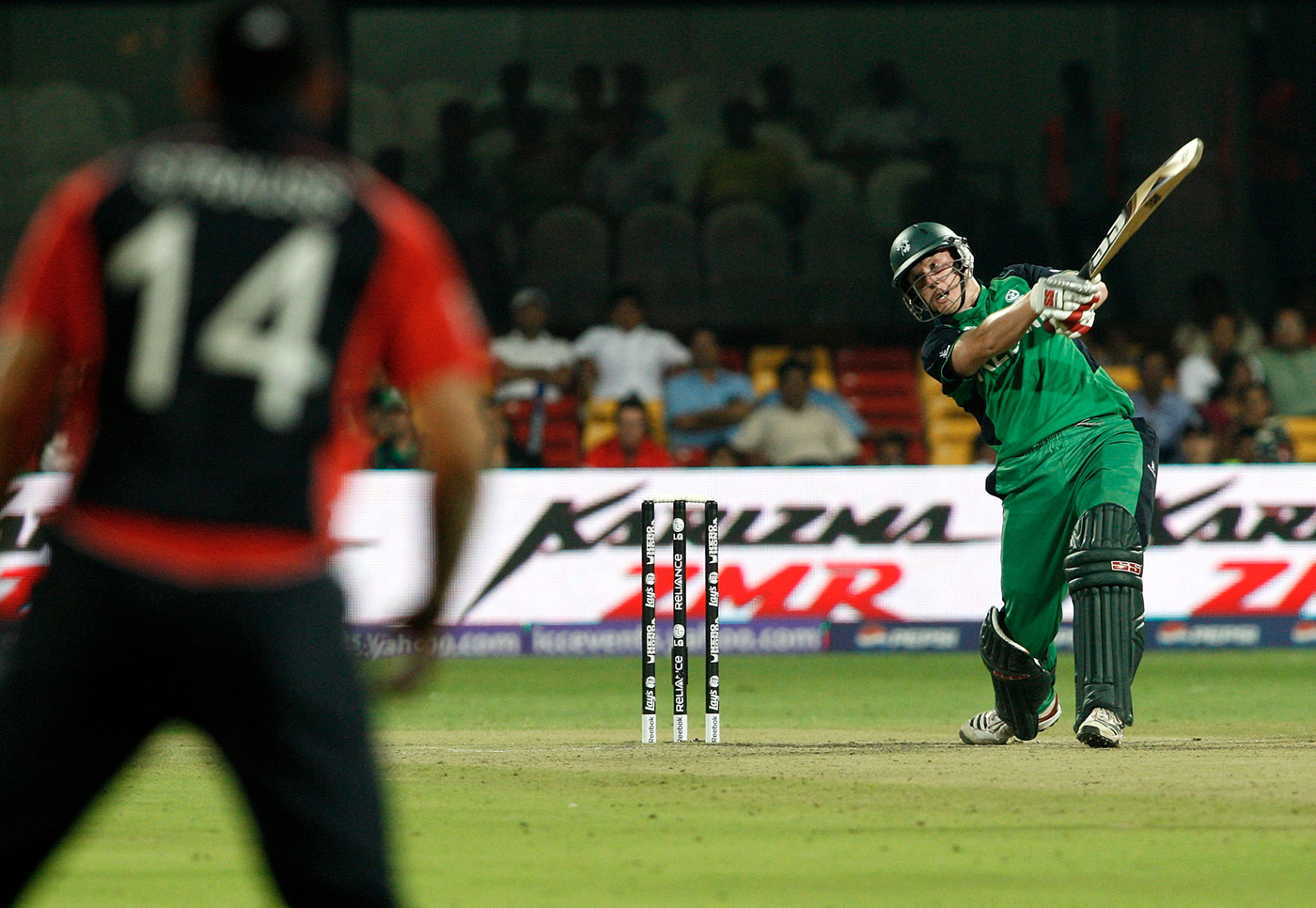 Mugging the neighbours: O'Brien gets going

Gobsmacking upsets, fearless chases and many sixes in this clutch of favourite Associate innings

Kevin O'Brien, 113 v England, Bangalore, 2011
Has there been a more triumphant moment for the Associate world? O'Brien's hundred was the ultimate "up yours" from cricket's serfs to its overlords.

O'Brien has never been one for backward steps. He once received a dressing-down from Paul Grayson when he was still trying to make it, as an MCC Young Cricketer. Grayson was the opposition coach during a 2nd XI game, and thought O'Brien was excessively chirpy during a match. Grayson cautioned that being a smart-arse when you are winning was well and good, so long as you can take it when things go against you.

But sometimes it takes a bit of fire to create miracles, and there was proper enmity in this innings. Like when O'Brien got into a slanging match with Matt Prior at the wicket, or when he congratulated James Anderson for managing a dot ball against him. Predictably that led to both abusing each other.

There was no room for meekness, though. The result was every bit as luminous as his dyed purple hair.

Mohammad Shahzad, 20 v Pakistan, Sharjah, 2012
The 15,000 fans came with bagpipes, tooting horns, waving flags and carrying pictures of former Afghan president Hamid Karzai. This was a festival for cricket's newest arrivals, Afghanistan, and their first ODI against a Full Member. The fans comprehensively drowned out Pakistani supporters, who had until then regarded Sharjah as their turf. Shahzad: six and out © AFP

Their team lost, but at least their darling, Shahzad, gave them something to remember the day by. The rotund wicketkeeper's stay was brief, but one shot encapsulated his mad, fearless method, and something of Afghanistan's spirit.

Saeed Ajmal had arrived fresh from taking 24 wickets in three Tests against England, the top-ranked side at the time. Neither did that impress Shahzad nor did it worry him: he reverse-swept Ajmal for six off the third ball he faced from him. It wasn't a controlled, well-practised lap over the rope either, but a maniacal kitchen-sink-and-all slog. It nearly ended up on the road outside the stadium.

It remains YouTube gold, soundtracked by Ramiz Raja commentary: "This is worth showing over and over again… Oh, deary me." A moustachioed Afghan in the crowd, with a beaming smile, gives it the thumbs up.

Peter Borren, 31 v Ireland, Sylhet, 2014
Netherlands faced an impossible task to advance to the main rounds of the 2014 World T20. They needed to chase 190 in 14.2 overs to leapfrog Zimbabwe and Ireland to qualify. Clearly they stood no chance. "We didn't have much to lose," Borren said later.

It was so ridiculous, so inconceivable, that William Porterfield, the Irish captain, who is usually well briefed, did not know the equation until well into the Dutch onslaught. The excessive muscularity of the batting made him regret it. Borren to lead by example: the Netherlands captain with his counterpart, Porterfield, after the game © Getty Images

Borren promoted himself up to open. His 31 was far from the headline act of the chase. Stephan Myburgh's 63 was more violent and decisive. Tom Cooper's unbeaten 45 was more assured and clinical (and more relevant to the prevailing narrative, given his controversial, eve-of-tournament call-up at the expense of Tim Gruijters). But the intent shown by Borren set all that up. It showed he believed it could be done and it led the rest to believe it too; in other words, a most inspirational kind of captaincy.

Binod Bhandari, 51 not out v Papua New Guinea, Sharjah, 2013
Cheering in the press box is a no-no. Sometimes, though, it happens unexpectedly and instinctively. Bhandari once prompted one such random paroxysm. It was the 30th match of the World T20 qualifier, at a neutral venue in the desert. I was there for a feature on two great hopes for the ICC's development programme.

With his side struggling in the chase, Bhandari arrived to the rescue. At one stage, facing Willie Gavera, the PNG fast bowler, he crouched, poked his hands out in front of him, extended his bat outwards and scooped the ball inches over his forehead. He looked like a tortoise withdrawing into its shell.

There was enough pace to propel the ball over the wicketkeeper's head - and 30 yards over the boundary, smack into the wall behind the sightscreen. It was sublime skill, the type with which Associate players are rarely credited, and well worth celebrating.

That was just one - albeit the most memorable - of six sixes in a blistering effort that ultimately took Nepal a step closer to the big time. Mohammed Naveed, 17 v South Africa, Wellington, 2015
Even Brendon McCullum was not quite as much fun to watch as Naveed at the 2015 World Cup.

Naveed owes his technique with both bat and ball to tape-ball cricket, which he played on the streets of the quiet, coastal town of Fujairah before his friends coaxed him into trialling for UAE.

The side was marmalised by India in Perth. Naveed didn't care. First ball he faced, with UAE 61 for 7, he slogged Ravindra Jadeja for six. In similarly dire circumstances against West Indies in Napier, he waited till the second ball to hit one.

His most fulfilling effort, though, was against South Arica. Eric Hollies is said to have predicted his second-ball castling of Bradman in 1948. Six weeks ahead of the World Cup, in a goal-setting meeting with coach Aaqib Javed, Naveed forecast he would hit Dale Steyn for six at the World Cup. Aaqib loved his spirit - notwithstanding the fact Naveed was veering away from his primary job as pace spearhead. And he made good on it, too, smacking Steyn 15 rows back into the yellow seats at cow corner.

Paul Radley is a sportswriter with the National. @PaulRadley Why this year's Associate crop is the best ever Best of the rest

A look at some players who missed out on Test cricket because they came from Associate-member countries. (One from each nation.)