Gilchrist: handy with bat in hand (or not)

No. 7 used to be reserved for batsmen and allrounders. Then along came the wicketkeepers

The story of the No. 7 in Test cricket is, in essence, the story of the wicketkeeper as batsman. In the formative years of Test cricket, keepers seldom batted at seven. Now, they are mostly cast-iron sevens. A modern-day selector would be as likely to consider a Bert Strudwick or a George Duckworth - England's two leading wicketkeepers in the years after the First World War, who both batted most often at No. 11 - as they would to pick a fridge-freezer as an opening batsman. Conversely, if you time-travelled to the 1920s and offered the MCC a No. 7 batsman-keeper who could capsize a Test match in a flurry of flamboyant strokeplay but would have to learn his glovework on the job, they would have assumed you were talking in code and spying for the Russians, and/or suffering some form of opium-induced episode.

Before 1930, just 8.7% of Test innings by wicketkeepers were at seven. The vast majority of keepers' innings were in the bottom four (70%), with 21% in the top six. Cricket was replete with allrounders and bowlers who could bat. With the prevalence of slow bowling, often treacherous and changeable pitches, and rapid over rates of around 23 per hour, keeping wicket must have been a relentless whirl requiring physical, technical and mental prowess (albeit perhaps without today's indispensable thesaurus of psychologically disintegrative sledge-jive). It was probably cricket's most demanding job. Specialists were required; runs were incidental. Keepers were not required to bat seven.

In those times, many of the largest innings at seven were played by specialist batsmen. Ranjitsinhji scored the first 150 by a seven, making 175 when he came in late due to illness at the SCG in 1897-98. His record was broken by Jack Ryder, who hit 201 not out in a formidable Australian batting line-up in Adelaide in 1924-25. Batting orders were moveable feasts in the early decades of Test cricket - in a 32-innings Test career, Ryder batted at least twice in all eight positions from two to nine.

His 201 was in turn surpassed by Don Bradman, who had debuted as a seven under Ryder's captaincy in 1928-29. In the pivotal third Test of the 1936-37 Ashes, Bradman held himself back to seven to avoid the worst of a wet pitch, and made 270, still the highest score by a seven.

After seven had enjoyed its highest-averaging decade in the 1920s (due in part to Australia's sevens scoring hundreds in four consecutive Tests in the 1920-21 Ashes, two each by Warwick Armstrong and Nip Pellew), the upward march of the wicketkeeper in the batting order began in the 1930s. Players such as South Africa's Jock Cameron and, in particular, Leslie Ames lifted expectations of what keepers could and should contribute with the bat. Before Ames, there had been two centuries by wicketkeepers in over 50 years of Test cricket. Ames scored eight, including the first two to be scored by a keeper at seven.

Batting at No. 7 was evidently for Alan Knott what having '80s-rock-star hair was to Old Testament celebrity strongman Samson

From 1930 to 1959, 21% of keepers' innings were at seven, 45% in the tail, 34% in the top six. Seven was still largely the preserve of allrounders, and the best keeper-batsmen tended to bat higher in the order (South Africa's John Waite, Imtiaz Ahmed of Pakistan, and briefly at the start of his career, West Indian legend Clyde Walcott), but England's magical gloveman Godfrey Evans had become the first long-term specialist seven.

Deryck Murray, Rod Marsh and Ken Wadsworth all batted mostly at seven as the keepers' ascent continued in the 1960s and 1970s, followed by Jeffrey Dujon, Ian Healy, Jack Russell and Adam Parore.

There were still major sevens who were not keepers, however. Kapil Dev batted 98 times at seven, scoring 2861 runs at 31.09 - he is now the only non-keeper in the top 11 places in the Top Run Scorers At Seven chart.

Imran Khan is 12th on that list, though his best batting came higher up the order, and Ian Botham was, in his early days, a prodigious seven. He is still second in the Most Hundreds By A Seven chart, with six centuries, the last of which was his Old Trafford masterpiece in 1981. At that point he averaged a staggering 53.50 in 20 innings at seven, and 24.26 in 42 innings elsewhere in the batting order. He seldom batted seven thereafter - only 14 times in 61 Tests after the 1981 Ashes. Perhaps seven provided the perfect Bothamic balance of rest and responsibility.

As the millennium neared its end, however, the supply of great allrounders dried up (although South Africa's bucket-handed 1990s multi-disciplinarian Brian McMillan batted 23 times at seven, averaging 58.38, the highest by a seven who has played 15 or more innings; he managed just 28.65 in 39 innings elsewhere). Seven had become largely the preserve of the keeper, offering a reassuring combination of a nuggety batting style and a mid-to-high-20s average.

And then came Gilchrist. One scoop or two? Knott in a 1972 John Player game © Getty Images

Adam Gilchrist made his Test debut for Australia in November 1999, scoring 81 off 88 balls against a strong Pakistan attack. In his second Test he hit a fourth-innings 149 not out off 163 balls, against an even stronger Pakistan attack (Wasim Akram, Waqar Younis, Shoaib Akhtar and Saqlain Mushtaq), to take Australia from a precarious 126 for 5 to their 369 victory target.

These figures do not account for nightwatchmen, and the stats could no doubt prove that if current trends continue, not only will the 2187 World Cup feature minus 158 teams but also, by then, all wicketkeepers will be opening the batting and taking first ball. But it seems that the ascent of the wicketkeeper to his anointed No. 7 destiny was completed and confirmed with the nuclear advent of Gilchrist.

Gilchrist averaged 46.44 as a seven, 67% better than his contemporary sevens combined (27.78); in his pomp years, however, from debut up to the beginning of the 2005 Ashes, his superiority was even more marked - 53.83 versus 27.87, a 93% superiority over other sevens, without even factoring in the thunderously destructive, bowler-crushing, match-shaping force of the manner of his batting.

All 12 players who have batted more than 20 times at seven since his retirement have been keepers, including many players of similarly aggressive ilk - MS Dhoni, Matt Prior, Brendon McCullum, Sarfraz Ahmed, Brad Haddin - as cricket's Test nations sought their own Gilchristian No. 7.

Gilchrist at seven made a great side significantly greater, and revolutionised the expectations of cricket. The change was already underway, but he accelerated it. As he did most things in cricket. However long Test cricket is played, he will remain the definitive seven. 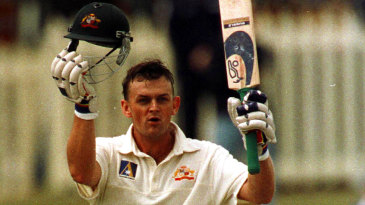 We don't know how change will manifest itself, but it is certain that Test cricket will soon feel the shiver that has run up through T20 to ODIs Wicketkeepers have been far more prolific with the bat since 2000, and Matthew Wade has shown early signs of conforming to that trend Is a specialist batsman worth his place at No.7?

A five-down batsman doesn't get many chances in a Twenty20, but some teams - one in particular - have had good results with a specialist at that position