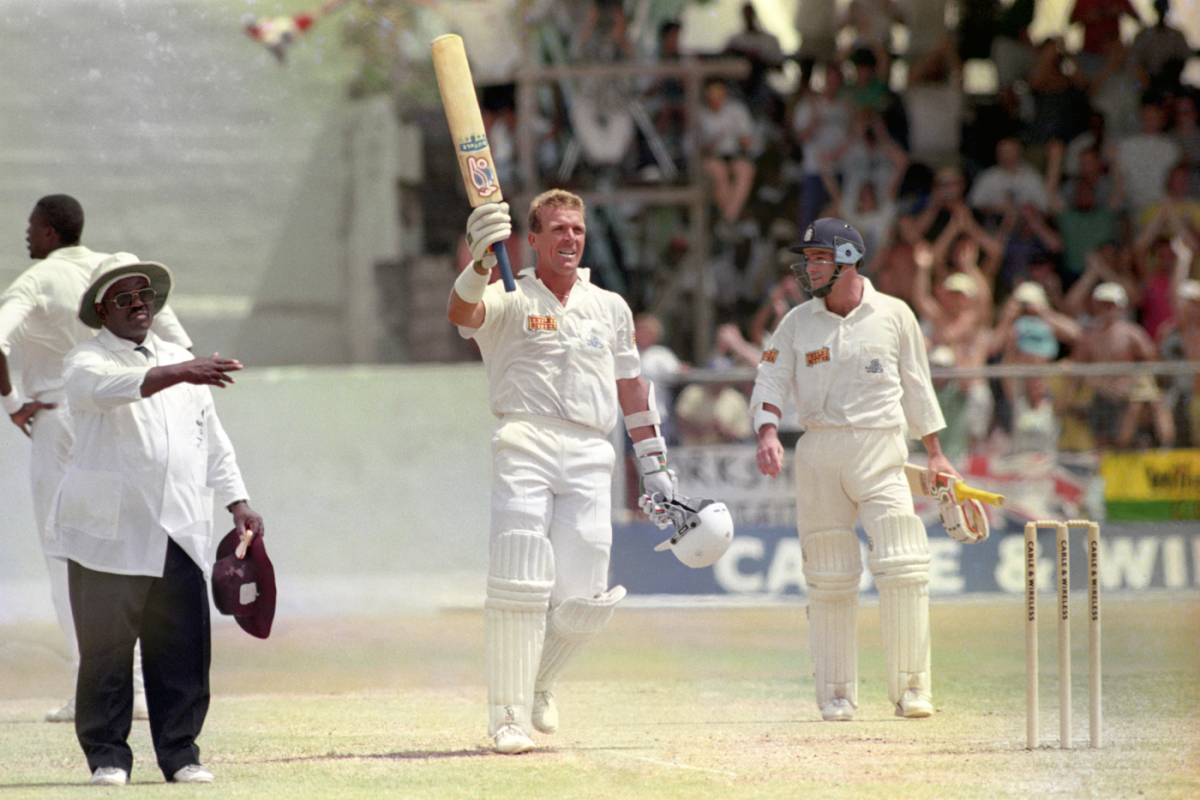 Double, no quits: Stewart makes his second hundred of the match, Bridgetown, 1994

Alec Stewart was too perky, too dapper, too eager. But on his day, he was also a game changer

Every school has one: not the most dazzling meteor of the scholarship form or a teacher's pet in the conventional, obsequious sense, but a diligent, talented child who subscribes to the establishment's spirit and values to such a degree that they seem prematurely sober, closer in nature and conduct to staff than fellow pupil. Ray Davies, the bard of Muswell Hill, wrote the Kinks' "David Watts" about the archetype: "Head boy… captain of the team… of pure and noble breed."

It could be an ode to Alec Stewart, summing up the reasons that I nursed a churlish and puerile distaste for him long after he had earned the right to be picked on his Test record instead of his promise, versatility and character. I did not hold his father's position as England coach against him to damn him as a beneficiary of nepotism. It was what he symbolised that set me against him.

After England's shambolic Ashes defeat in 1989 and shameful defections to South Africa, a fresh start was imperative. And to that end it was understandable that David Gower, the high priest of the Cresta Run and Veuve Clicquot tendency, was omitted so the new captain, Graham Gooch, might attempt to mould a team of Stakhanovites in his image.

For a generation in Britain that was intoxicated on affected insouciance and hedonism, looking like you cared was the worst sin of all

There was always something endearing about Gooch and his careworn dedication, but Stewart was just too perky and dapper, what our neighbours across the Atlantic would call an "all-American boy" - someone untrammelled by doubt or cynicism. He exuded the cocker-spaniel bounciness and the "me, sir" eagerness of the inveterate volunteer.

The pristine Colgate-bright helmet, immaculate equipment, starched collar, all-year-round tan and sleek streak of sunblock across the bottom lip gave "Smart Alec" the air of a marine in his dress whites. For a generation in Britain that was intoxicated on affected insouciance and hedonism, looking like you cared was the worst sin of all.

It took him until his 13th Test and third as wicketkeeper to look as though he belonged for the long term, putting on 75 for the fifth wicket with Robin Smith at The Oval against West Indies in 1991. For 17 years England had been battered and traumatised by West Indies, so to be one of the men who finally restored respect by drawing the series should have pardoned all sins. But England selecting a makeshift wicketkeeper still seemed improper for a country that prided itself on its Kentish production line of Les Ames, Hopper Levett, the athletic Mr Pickwick Godfrey Evans and the nonpareil, APE Knott, that nimble, soft-handed jack-in-the-box. Stewart's evolution into a fine, reliable keeper - one capable of brilliance standing back as shown at Lord's in 1995 with his acrobatic swoop to catch Brian Lara - would eventually make his critics retreat, but at the time the injustice done to the doughty and engagingly eccentric Jack Russell was another black mark against the one-man emergency response unit. 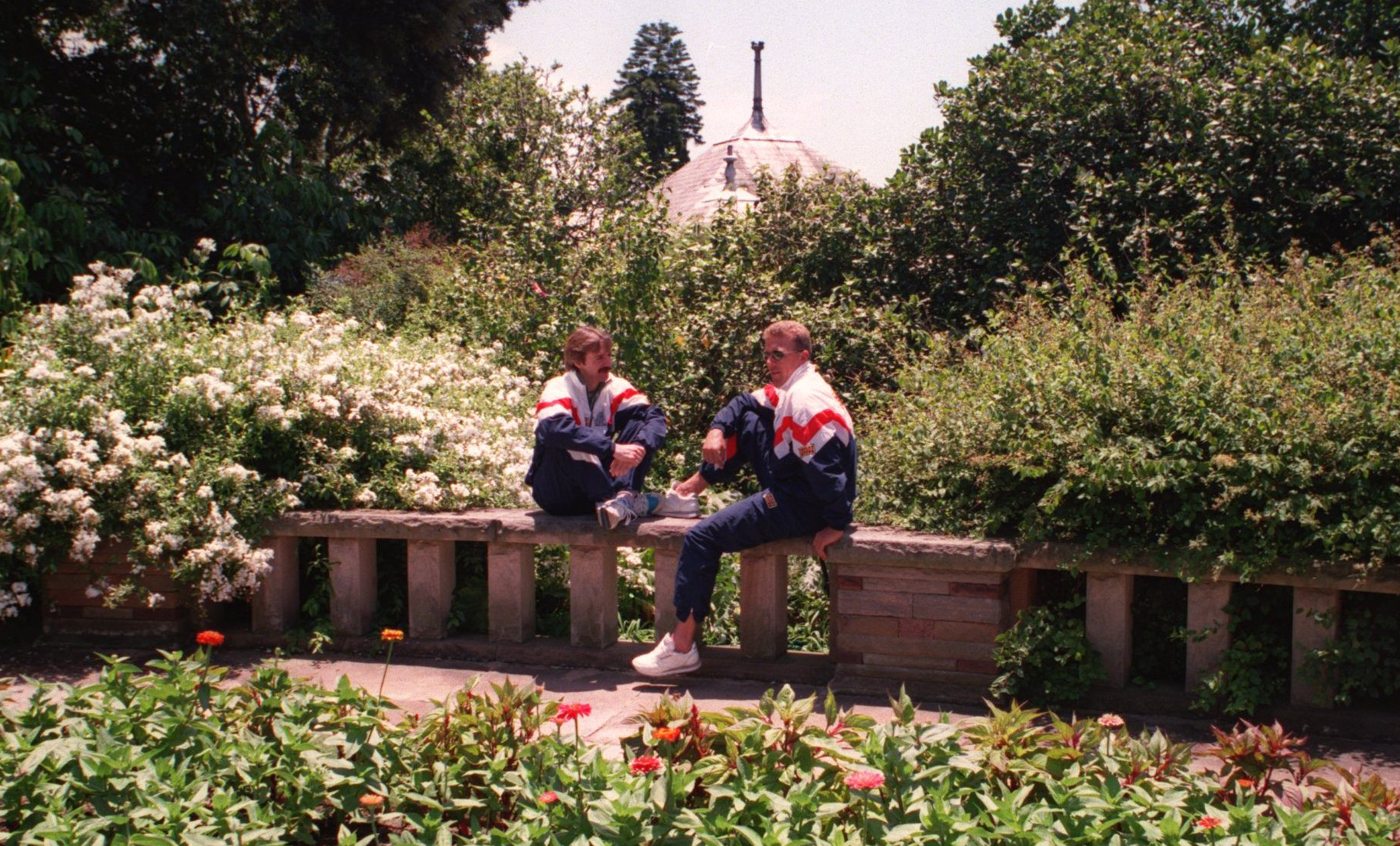 With Jack Russell, who was brought in as Stewart's replacement, on the Ashes tour of 1994-95 © Getty Images

If irrational prejudice and snobbery, masquerading as good taste, sparked my hostility it was reinforced by the pitiful sidelining of Russell for the 1992-93 tour of India and the head start Stewart was given over the heir presumptive Michael Atherton in the jostle to replace Gooch.

Stewart had batted beautifully as an opener against New Zealand and Pakistan in 1992 and his judgement grew sounder by the innings; he even carried his bat at Lord's for 69. Nonetheless I felt that it was critical that he should not inherit the captaincy. To me he was the sticking plaster, the continuity candidate who would follow the conservative mentality exemplified by the preposterous decision to recall a virtually lame Neil Foster for the 1993 Lord's Ashes Test. As such, it was tempting, though obviously glib, to see him as a kind of John Major figure, trying to keep a moth-eaten show on the road as the world changed around him. The younger man represented revolution and a contemporary tone.

And so when, to this pessimist's surprise, Atherton fulfilled the destiny of his double-edged FEC nickname and became England captain at Edgbaston in 1993, my last rational objection to Stewart was demolished. The unreasonable ones would soon wane in its wake.

It dawns on some of us too late that "cool" is a pathetic concept. What counts is a man's standards, spirit, honour and style

When he ended a drought of 33 Test innings without a century on the first day's play in Bridgetown against West Indies in 1994 only a week after England's capitulation in Trinidad, his most patent attributes shone through. Driving crisply and pulling with savage force, the sweetness of his timing gave each attacking stroke an elegant sheen. If his chanceless 118 was a frontal assault, his second-innings, match-winning 143 was a counter-offensive epic defined by character as much as class.

For more than seven and a half hours he withstood Curtly Ambrose, Courtney Walsh, and Winston and Kenny Benjamin in the citadel of West Indies cricket, his usual fluency and tempo fluctuating but his fortitude unimpeachably steadfast. It was the first time I truly recognised the other meaning of valiant - not simply being unyielding but assuming responsibility. Small wonder Ambrose and Walsh, in their dressing-room fantasy selection musings overheard by Nasser Hussain, picked Stewart in their World XI thereafter.

I played hooky from work and watched in a squalid London pub as he brought up his second hundred. It was there amid a dreary Tuesday-night crowd of boozers, observing his concentration and resolve as he battled exhaustion, that I was converted, even inadvertently baptising myself the next day at the moment of England's victory, the hosts' first defeat in Barbados for 59 years. As I leapt out of a chair when Chris Lewis arced the ball through Ambrose's attempted slog and knocked out middle stump, beer, appropriately enough brewed by the team's sponsor Tetley's, shot out of the glass and soused me. 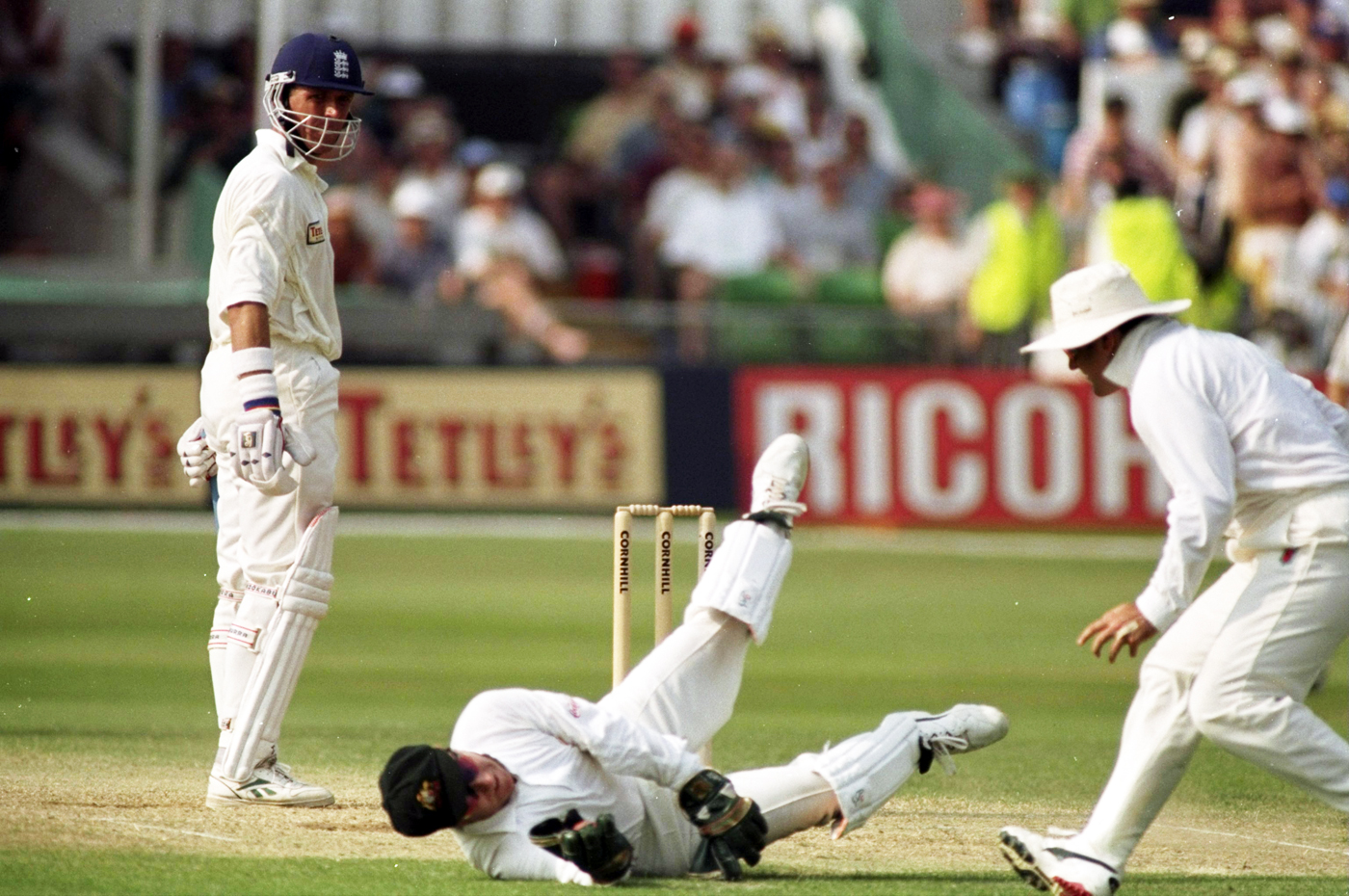 Going down fighting: Stewart's innings finishes on 87 at Trent Bridge in 1997 © Getty Images

Although I was now a true believer it was clear that my West Riding kinsman, England's new "supremo" Raymond Illingworth, was an implacable dissenter. First he brought back Gooch, then lumbered Stewart with the gloves again before finally dropping him for the Edgbaston Test against India in 1996. At the age of 33 that could have been the end - it was for Robin Smith, who was born in the same year - but when Nick Knight broke his finger to give Stewart another chance, he refused to let go. Typically he proved his point with a masterly 170 at Headingley against Pakistan in the second series of the summer, but Illingworth's glum, begrudging face revealed more than his meagre applause.

Yet he persevered, maturing into a very good wicketkeeper, an underrated captain who led England to their first five-match Test series victory for 12 years when fighting back to overcome South Africa in 1998, and remained, at his best, a thrilling batsman. The century during his 100th Test, at Old Trafford against West Indies in 2000, appropriately enough for the royalist and patriot on the Queen Mother's 100th birthday, was rightly acclaimed. The ability to rise to an occasion, even if the anniversary was more about himself than his side, is a special kind of talent.

In his 13-year progression from late starter to elder statesman, however, the innings I think define him best do not include that momentous penultimate hundred. Barbados is imperishable but his 87 off 107 balls at Trent Bridge against Australia in 1997, the 45 he smashed off 34 balls at the same ground a year later against South Africa to tie the series after Atherton's defiance and luck had seen off Allan Donald, and the 95 in Durban in 1999 that briefly electrified a torpid game encapsulate his contribution. He was a genuine tonic, sometimes a game changer but, equally valuable, often a mood changer.

Providing memorable comments proved as elusive to him as conquering Shane Warne, though there is no shame in either perceived shortcoming. The bland football-manager speak and incurious streak - he ate grilled chicken breast, mashed potato and broccoli for 43 successive days during the 1996 World Cup - were far easier to forgive as one grew older and more tolerant. It dawns on some of us too late that "cool" is a pathetic concept. What counts is a man's standards, spirit, honour and style. Alec Stewart, a dandy in square's clothing, ended his career prosperous in each quality.

Rob Bagchi has written on sport for the Daily Telegraph since 2013, after ten years at the Guardian 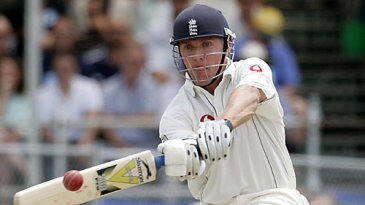 Surrey's surprise round of belt-tightening, which led them not to offer new contracts to Alec Stewart and Ian Ward, means that Stewart has played his last game of professional cricket 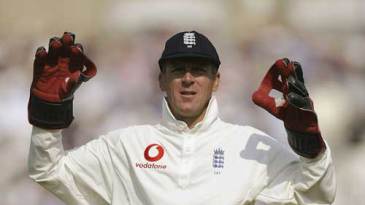 The Gaffer to the bitter end

Starched collar to the fore, and never a grass stain in sight, Alec Stewart is not the type of cricketer who wears his heart on his sleeve 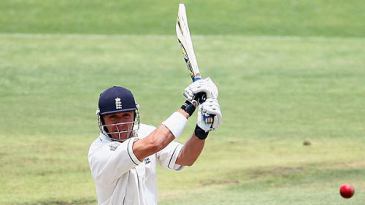 It was at Lord's, midway through the morning session of the fourth one-day international last summer, that it was spotted