As West Indies take on Australia at the MCG this Boxing Day, Rohan Kanhai turns 80. A tribute to a pioneer and a hero

"I've never doubted my batting ability from the day I could hold a piece of wood between two small grimy hands."
- Rohan Kanhai, Blasting for Runs

This consuming confidence in self was released in November 1960 at the Melbourne Cricket Ground, the largest cricket theatre in the world. The sprawling ground, with its massive stands imposing themselves at the perimeter of the playing area, seemed designed specifically for Kanhai's artistry. He scored a memorable 252 against Victoria, witnessed by the late Australian batsman Jack Fingleton. He writes of Kanhai:

He was a run-hungry young man and he knew how to go about building a big score. He seemed to hate bowlers, to hate the ball, and his whole being seemed to explode in spite as he got the stroke out of his electrified system. He hit so hard to leg that often he fell over in the middle of the stroke and once, in this 252, hit a perfect sweep when prone on the ground. Even so early at Melbourne, Kanhai had his own ideas as to who was the best batsman not only in the West Indies side but in both sides. His bat flashed like his dark eyes.

Many nights I would lie in bed thinking of Kanhai flat on his back as the ball disappeared among white people, and I would try to will myself to sleep

What Fingleton could not realize then was that Kanhai's "sweep when prone on the ground" was a stroke that was uniquely his, no aberration. No one had played it before; no one has played it since. A cross between a sweep and a hook, Kanhai was usually off the ground as the horizontal blade crashed savagely into the ball, and with a free flow he would settle on his back, the bat aloft, his head off the ground, his eyes frozen, pursuing the retreating ball into the crowd beyond the backward square boundary - all of this performed with great dignity, flawlessly, nothing tawdry. The execution of this stroke required impeccable footwork, supreme timing, immense self-confidence, and, of course, that untutorable gift, an instinctive sense of theatre. One cannot be coached into playing the stroke; no one will play it the way he did. No one may attempt it. This is Kanhai's gift to humanity. Everyone who knows how to enjoy life should see it on film sometime.

Sunil Gavaskar has spoken of Kanhai's immense popularity wherever he goes, and also of his charming effect on women. I think I understand why. It is not unrelated to his joy at being alive and his sense of theatre which spawned that amazing stroke, what Sir Neville Cardus once called, "the triumphant fall". The man had that special touch, an aristocracy of the spirit; very few people have it. And it came alive in Australia in 1960-61. Kanhai scored prolifically, with a century in each innings in the Fourth Test at Adelaide in January 1961. But the scores are only a part of the story; the quality of the work and the great joy it brought to the Australians belong to the realm of experience, living a full life and being grateful for being alive. An innings of 84 in a West Indies score of 181 in the second Test at Melbourne encapsulated all the man's great gifts. This is how the old master, Bill O'Reilly, experienced it. Kanhai was at the wicket when 2 wickets had fallen for 1 run:

He dropped Davidson's hopes with a magnificent square-cut; followed immediately by a morale-busting on-drive which went straight back past the left-hander like a bullet.

Benaud's spinners had no effect. Kanhai moved down the pitch and hit hard into the covers where he kept O'Neill and Harvey busier than they appreciated...

To rub in the obvious knowledge that he was in full control, he occasionally lofted the ball high to unpatrolled sections of the outfield.

The volatile little batsman is a worrying problem for Australian bowlers.

He constantly accepts the risks involved in hitting into the ball, but his bat moves at such unusual speed that even if he does mis-hit, the ball generally is bound to fall safely out of danger from the in-fieldsmen.

Kanhai's "sweep when prone on the ground" was a stroke that was uniquely his, no aberration. No one had played it before; no one has played it since

O'Reilly then observes what I believe to be the technical clincher behind the execution of the art. "Unlike English batsmen opposed to spin, Kanhai moves well forward down the wicket to get to the pitch of the spinning ball; consequently he is always there in the right position for an attacking shot." He concludes on a perspicacious note: "Kanhai has become a commanding cricket personality in this country. One cannot fail to admire the courageous manner in which he accepts his batting responsibilities which he carries out with the confidence and pugnacity of a man who knows all the answers and is keen to reveal the fact."

Everything Kanhai did in Australia in 1960-61 had a regal exclusivity. His fielding and his rocket-like returns from the boundary over the bails immobilized batsmen with fear; and the amazing speed with which he set off for a run confounded fielders into recurring fallibility; it also precipitated a few memorable tragedies with his partners. And the miraculous catching! Here is Fingleton's description of a catch Kanhai took to dismiss Bobby Simpson in the Third Test at Sydney:

Kanhai took in the match the best catch I have ever seen. Simpson neatly leg-glanced Hall and the ball went low and at a furious pace. Kanhai was at fine leg-slip and he dived along the ground a good four yards to catch the ball left-handed while still skidding along the turf. He moved like a black mamba, famished after hibernation, on sighting its first prey. He rested at last with the ball held in an arm raised up like a signal.

O'Reilly was equally overwhelmed by this catch. He writes:

Simpson had middled the leg-glance clearly and safely, so it seemed.

This Kanhai catch was the best effort of its kind I have seen. It served as a classical example of the manner in which inspired fielding can alter the course of an innings. Until Kanhai brought off this spectacular effort I placed Alan Davidson's catching of Hutton in 1954 as the prize-taking leg slip catch. 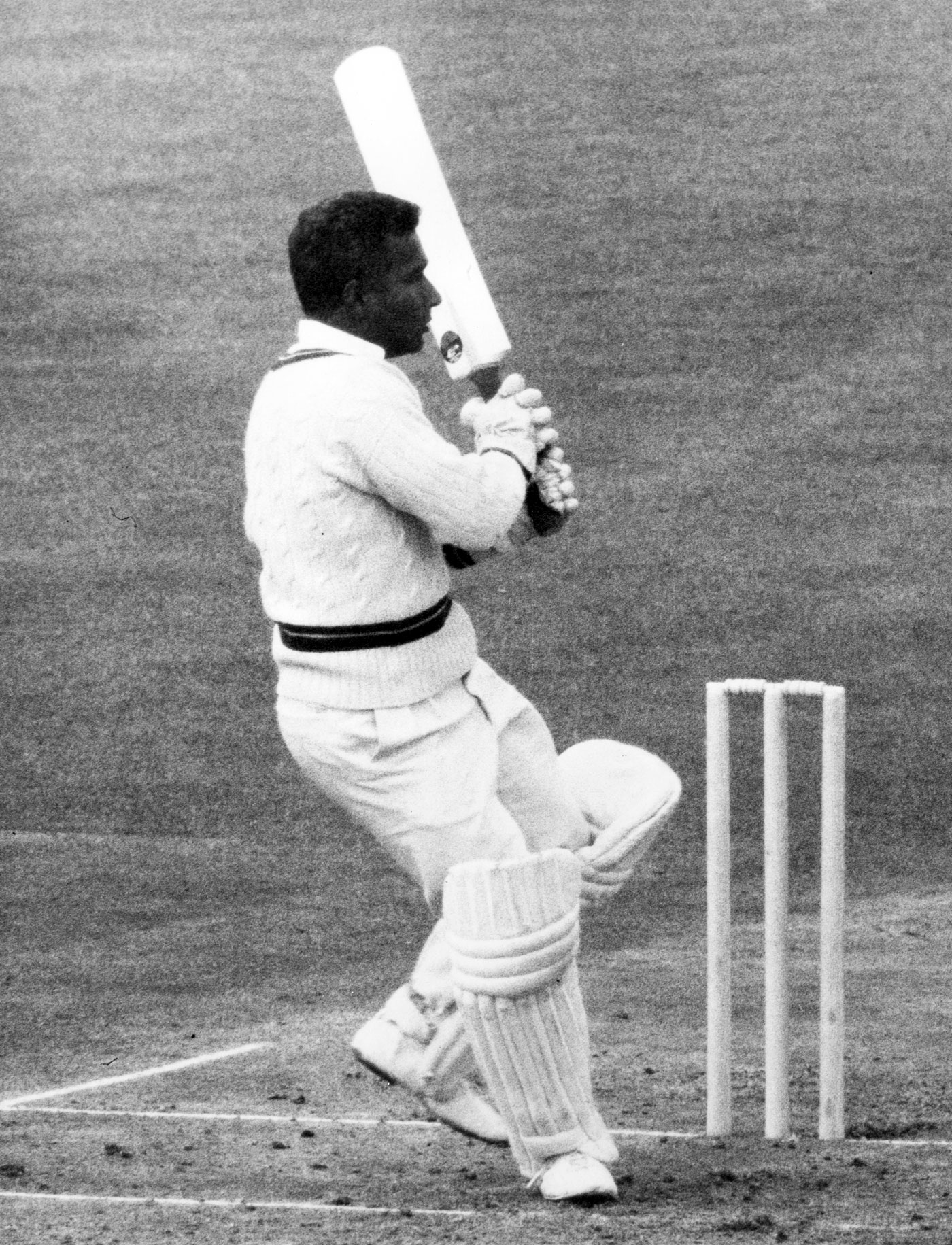 Throughout the 1960-61 series, I listened all night to the commentaries from Australia on the radio. This was never a solitary exercise in the sanctity of my home; it was a communal experience. Our radio was bigger and louder than our neighbours', and it was harnessed to a battery plucked from our old Ferguson 29 tractor especially for the occasion. I was joined many nights by boys many years my senior and even men my father's age: Ole Bai, Agile, the cricket historian of the village, Laang Mangoe, Sahge, Bumbry, Duck Foot and Ragoman Singh. We worshipped Kanhai, and it was during this time we became convinced that he was the greatest, most complete, batsman in the world. We brooked no arguments to the contrary. For us that particular stroke, "the triumphant fall", executed in the middle of the night, in that distant place at the bottom of our school's global model, accompanied by the hauntingly beautiful, thunderous clapping of Australian hands, made us feel that we mattered. Listening to this on the radio, in a tone of poignant remoteness, fed our sense of fantasy; our young imagination was challenged; our cruel wit was sharpened; our irrepressible laughter from the gut profaned the silent night; but being alive was fun, and no one could rob us of this bliss; men became boys; boys felt like men - it didn't matter.

"Kanhai has become a commanding cricket personality in this country...a man who knows all the answers and is keen to reveal the fact" Bill O'Reilly

We all attempted to play "the triumphant fall", although we had never seen it executed. And as the solid darkness descended on the village, big men and little boys would continue, late into the night, talking about the great man from Port Mourant. But we could not see that we had actually enthroned the man into the pantheon of Hindu Gods. Little boys would crudely extract pictures of Kanhai from the newspapers and unconsciously paste them among the framed pictures of Hindu deities on the walls of their homes. And each morning, as their mothers communed with the Gods, sprinkling fresh water and reverently placing flowers on these pictures, Kanhai caught among Lord Shiva, Lord Krishna and Hanuman, received obeisance from Indian women in Guyana. We were coolies, illiterate labourers and peasants; many of us went to school barefooted - Kanhai as well - and when white people in Australia abandoned themselves to the man's mastery, we all felt we were somebody.

I grew up among these Hindu deities and their bizarre visual representations. I could not ignore them; I could not be neutral. I was awed into fantasy. Many nights during the Australian tour in 1961 I would lie in bed thinking of Kanhai flat on his back as the ball disappeared among white people, and I would try to will myself to sleep. But a strange fantasy would intrude, and I would see Kanhai on a winged chariot moving in the sky, decorated with stars, like in the pictures of Hindu deities on our wall. I did not mount Kanhai's pictures among my mother's deities; she would have uprooted them. I collected cuttings and pictures and filed them. So Mom never sprinkled holy water on Kanhai. But one night in January 1961, when he was approaching his second century in the Adelaide Test, she got up and, in her negative way, asked, "'e out a ready, nuh?' I replied, "Yu mad or wah? 'e about fu mek 'e second hundred. Hear." She sucked her teeth in that peculiarly West Indian way: 'Me mus' e get time. Jis now 'e ga out.' She stayed around, pretending to do something or the other. It was her way of concealing that it mattered very much to her how Kanhai did. But she was listening. A solid tension hung in the air as Kanhai got into the 90s; the odd remark was forced. But the century was made; we were all ecstatic, save Mom. When things had subsided, I stole a glance at her, and for one fleeting moment I saw her wipe a tear from her eye. She walked away. I suspect she saw that I also could not restrain myself. I went to bed, and for several hours afterwards, I could not sleep. I thought hard. But I could not make sense of these things. Not then.

Sharing these experiences with cane-cutters, rice farmers, fishermen - ordinary village folk - enriched my appreciation for the spoken word, and it endowed me with an eternal humility, an unconquerable curiosity, and a love for life. It was indeed a rich boyhood. And I owe it all mostly to the man from Port Mourant, Rohan Kanhai.

This is an edited extract from Indo-West Indian Cricket, published by Hansib (London) in 1988 A flashing blade, a canny mind

He may have seemed a trigger-happy dasher, but he also had the sharpest of cricketing brains It would be difficult to imagine a more entertaining batsman than Rohan Babulal Kanhai, leading scorer for either country in last season's England v