Born to not run: at the 1999 World Cup against Australia, for a change Inzamam runs himself, and not a team-mate, out

Did any batsman turn a dismissal into as much light relief as Inzamam-ul-Haq did?

Opposites attract
Let the first dismissal be "… amam-ul-Haq". To us he is simply "Inzi" and all that it encapsulates: chubby big brother with a bit about him turned avuncular bearded wonder. Inzamam-ul-Haq sounded overbearing and underhanded (which he sometimes was) but Inzi was that friendly, bear-hugging beast of a talent (he mostly was) that we grew to love and wish to remember.

The trouble with memory, though, is our wishes are rarely granted. Going back, for instance, to the 1992 World Cup, Inzi's rudely prodigious entrance to the highest stage - that composure, that grace under pressure - is always checked by a counter image: the famous "Superman" run-out from the game against South Africa.

In hindsight, the narrative symmetry is almost too good to be true. It seems inevitable that Inzi would be the scampering victim as Jonty Rhodes announced the ascendancy of modern fielding and the new reign of the gods of cover-point.

Rhodes, not the most blessed of batsmen, made a career out of athleticism; Inzi, natural ability personified, seemed to treat the concept as haram. That dismissal foreshadows the rest of his cricketing life: Inzi the master old-world swordsman who refused to accept that the world now fought with machine guns.

The straight man
Cricket offers a fair amount of pantomime; if you like that sort of thing, Inzi's run-outs are a treasure chest of mirth. However, his run-outs of team-mates are on another level altogether. A man alone can make us laugh, but it takes an ensemble at the top of their game to have us rolling in the aisles. Stranded together with the great man at the same end, Inzi's partners regularly found themselves unwilling participants in a farcical double act.

It probably happened to everyone Inzi played with (including, of course, the tail: for all the talk of his belly, Inzi was Pakistan's spine). Mohammad Yousuf was a frequent fellow farceur in this regard; no great runner himself, they'd have called Yousuf the new Inzi if he had not been so thin. The fate of being sold down the river by cricket's big blue whale, however, appears to have befallen Wasim Akram more than it did anyone else. Of these misfortunes, at least in the 1999 World Cup, against Australia at Headingley, it was Inzi himself who got sold.

It's epic YouTube: facing Damien Fleming, Inzi gets rapped on the toes, suggests vaguely he might run, before returning to the crease. The manner in which he falls recalls the wonderful bar scene from Only Fools and Horses - in ultra-super-slow motion. What makes the moment extra special is the pleading from Waz as he storms towards Inzi's end, increasingly cognizant that his toppled partner ain't moving. The sounds seem to emerge from the deepest core of the man's very soul. If they ever make Inzi: The Opera, this run-out should be the first audio reference.

Immovable object
One would think that, with all that bulk, Inzi would be the safest bet in the game when it comes to not minding being hit. Two instances when this was not the case serve as refutation.

In a Test against England in 2005, the bowler, Steve Harmison, fielded a shot hit back by Inzi, and then hurled the ball stumpward. Inzi was actually in, until he lifted his back foot just before the impact of ball on wicket, and so was out. What surprises is the balletic movement of his calf; the delicacy of the raised foot; the decorous way he gets himself out. Inzi pirouetting his way to evasive action - the incongruity is thrilling.

Less than three months later he was out obstructing the field against India, after the ball was fielded and thrown at him by Suresh Raina, only for Inzi to strike it with his bat. The appeal wasn't India greatest moment, but then neither was the "shot" by Inzi the best course of action. Another man would have seen the incoming ball, turned in double time, and got back in. And this is the problem with all these dismissals: for all the funny business, one can't quite shake off the idea that if he'd been a little more on the ball, the near-great Inzi would have made it over the line. He would have reached that tier - Lara, Sachin, Ponting - of which it must be said he falls tantalisingly short. Obstacle course: Inzamam treats the stumps like a hurdle (or not) at Headingley in 2006 © PA Photos

Defying physics
Momentum is mass multiplied by velocity. Let us apply this to Monty Panesar's 2006 dismissal of Inzi, in which the big guy went for a sweep, missed, and somehow tumbled back and over the wicket, brushing off the bails with his chest in the process. Watch it again: there's something off.

We'll allow for plenty of mass, but the velocity variable seems to come from nowhere. It's worth deliberating on this, because Inzi often suspended the usual laws of the physical world. Despite his resistance to training, he must have been absurdly fit to play all those long innings in such heat. For all his body weight, he had the deftest of touches and wielded the bat as a poet does a Mont Blanc. And then there's the most telling detail: an Inzi in good nick would bend the very nature of time, playing the world's top pacers as slow-medium filth.

But back to the dismissal and no fancy talk can get away from the fact that it's hilarious. I showed it to my lads the other day, and laughter filled the sky. At the time, England celebrated gleefully. Looking at Andrew Strauss, Matthew Hoggard, Paul Collingwood and the rest giggle their schoolboy contempt towards the big fella just compounds the moment. You feel sorry for him, but you don't feel sorry for enjoying the spectacle. (And you also remember that Inzi had spent the previous year pummelling that England side to all corners.) 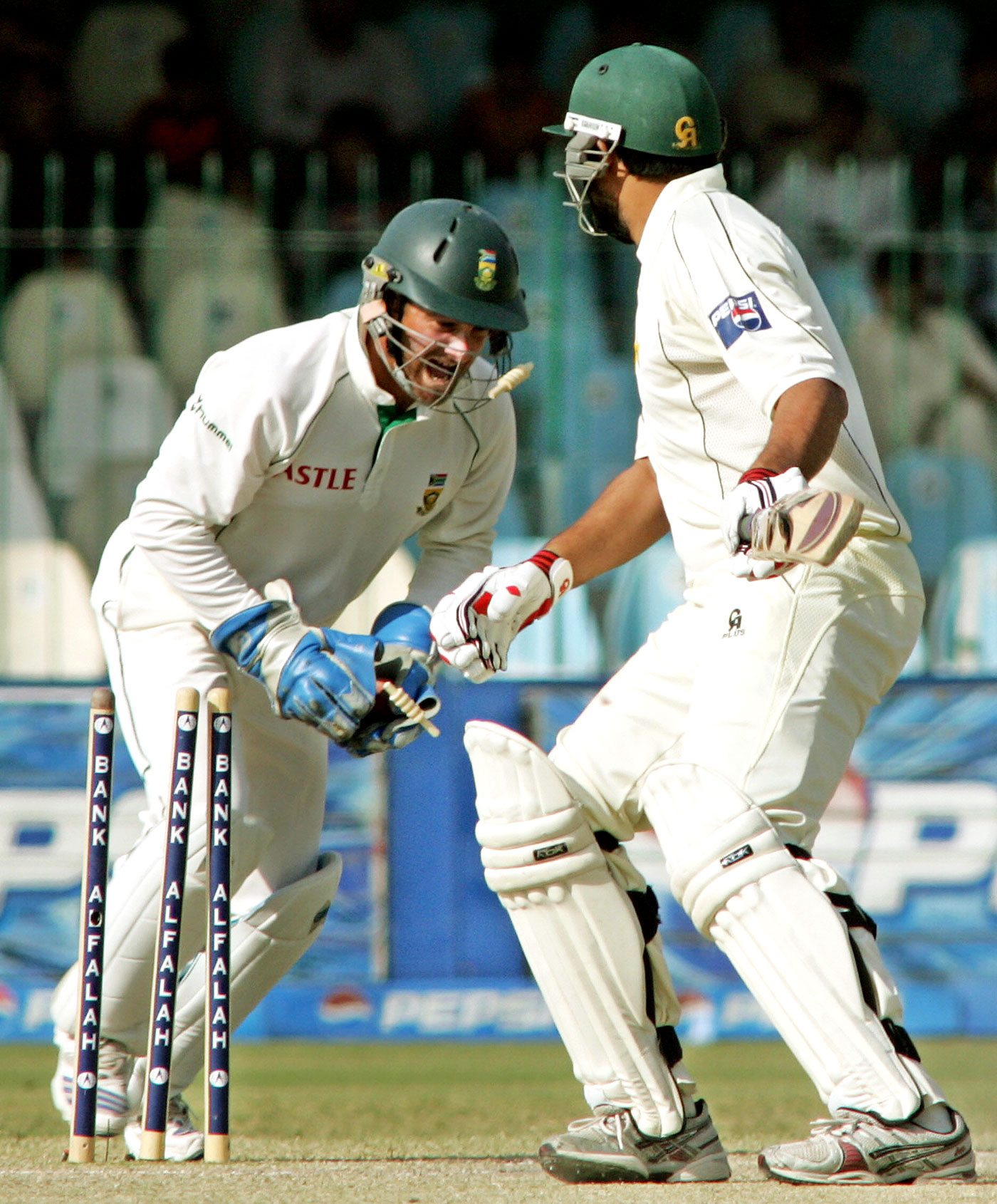 Inzamam left the international stage, stumped off Paul Harris in Lahore in 2007 © AFP

The last dismissal
Pakistanis won't forgive the cricket world for too often reducing Inzi to a caricature. The talent seems to be acknowledged politely, before heading on to the real stuff, which, it appears from their tone, is that the man was a joke. The country has legitimate claim to calling out this injustice. Like with so much else, they know deep down in their hearts that the semblance of truth is largely self-inflicted. Inzi didn't bother with running; he didn't learn the rules on obstructing the field; he did one too many mad things, like forfeiting a Test and running into a Canadian crowd in search of a moron with a megaphone.

But he was a wonderful batsman, and he deserved a great departure. Instead, in his last match, a Test against South Africa in Lahore, he was stumped second ball off - wait for it - Paul Harris.

Nevertheless, this tragedy too bolsters his legend. There's something Falstaffian about Inzi, and even his sad farewell mirrors Shakespeare's pitiful banishment of his wonderful creation. Like the barrel-chested wit, Inzi was nuance, soul and heft stuffed into a human body brimming with too much life. Like Falstaff, he was harshly dismissed from the stage, not given an ounce of the fanfare that accompanied send-offs of other heroes. We might also say that Inzi's young, sprightly, scheming successors had something of the tedious Prince Hal about them. Indeed, following Inzi's last innings, who came to the crease to see the draw home? Inzi's captain, a 25-year-old mediocrity called Shoaib Malik. It's a cruel world, and in the tragicomedy of his dismissal, it seemed altogether crueller to Inzamam-ul-Haq. Inzi turns back the clock Inzamam-ul-Haq may not have kept it all together all the time; he couldn't. But he was there through all of it, the highs, the lows, the thick, the thin: a reassurance 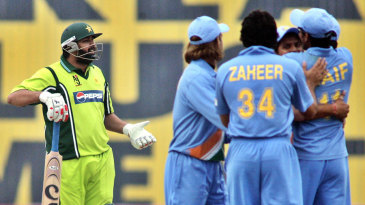 Eleven bizarre dismissals ... and one that got away

Over the years, batsmen have lost their wickets in strange ways. Here's a collection of those dismissals