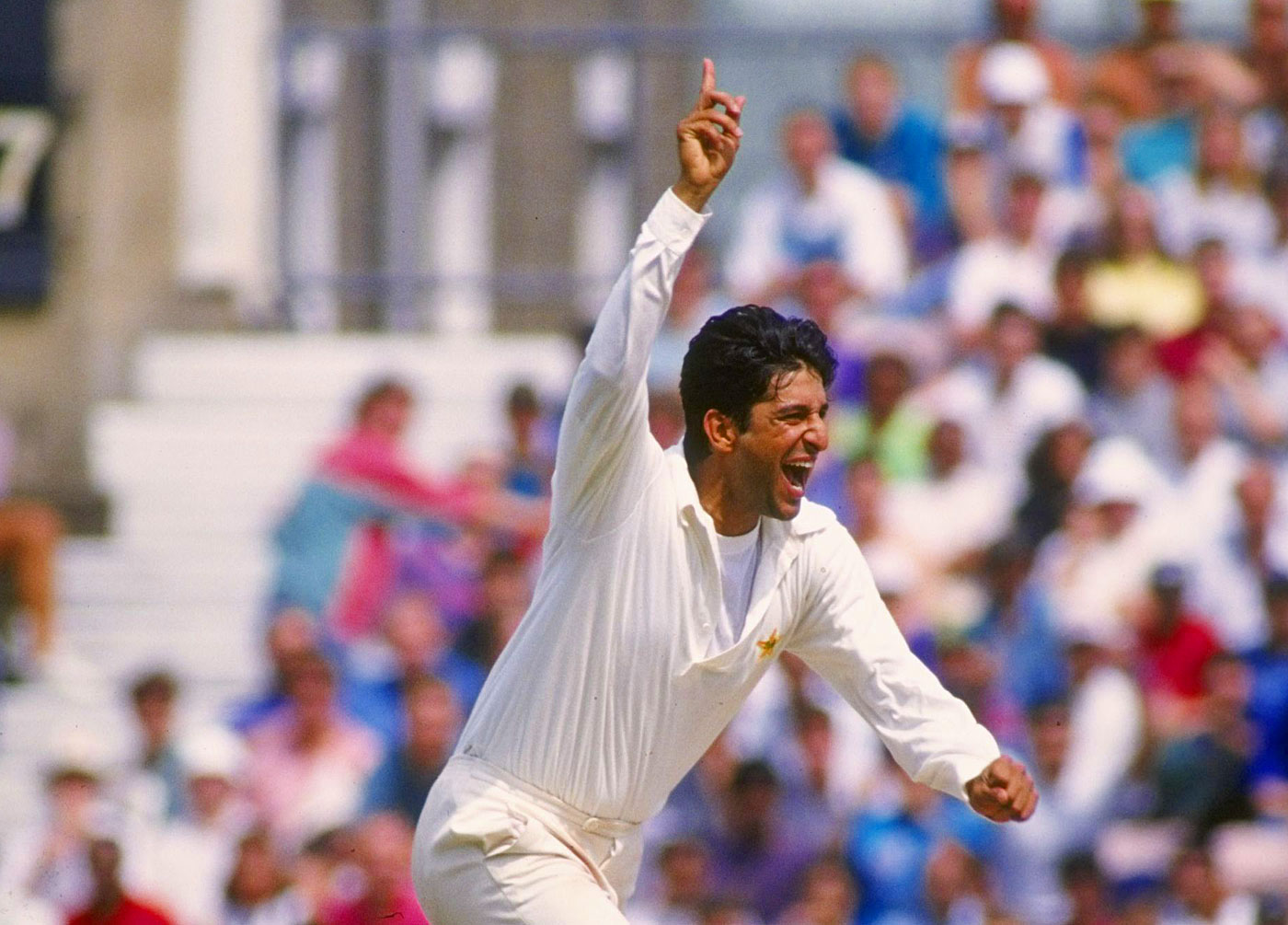 Swinging to Waz's tunes: the story of the '92 English summer

The magician
Wasim Akram, England v Pakistan, 1992
In sport it's often a single moment that hooks a fan for life - a stunning goal, a breathless rally, a mazy try. Test cricket can seduce someone over a series, finding an impressionable child and ensuring cricket never leaves them. In 1992, Wasim Akram was the master of my destiny.

Now, Akram had lots of wonderful series. Few bowlers can match his list of series-shaping hauls. He had already viciously stung Australia in 1989-90 and was unplayable when West Indies toured Pakistan in 1990-91. But his otherworldly performance in 1992 changed the perception in England of what a fast bowler could do.

England were mesmerised, their batsmen operating in a world seconds behind the one Akram was bowling in

In the series he had already picked up his 150th Test wicket, hit the winning runs at Lord's and bowled with venom to take a five-for (among 32 no-balls) at Old Trafford before he saved his brilliant best for the decider at The Oval.

His 6 for 67 on the first day was a magician going through his entire repertoire. Levitation, rabbits out of the hat, sawing bodies in half, a spot of mind control. England were mesmerised, their batsmen operating in a world seconds behind the one Akram was bowling in. The Test was gone before it had started.

The English press reacted with ignorance, accusing him and Waqar Younis of ball-tampering. But from suspicion often comes learning, and the more judicious English coaches took note. Without that series, without Wasim and Waqar playing county cricket, reverse swing may have passed the likes of James Anderson, Andrew Flintoff and Simon Jones by. In that one series, Akram took English cricket into the future, and brought a new generation of fans along for the thrilling ride. 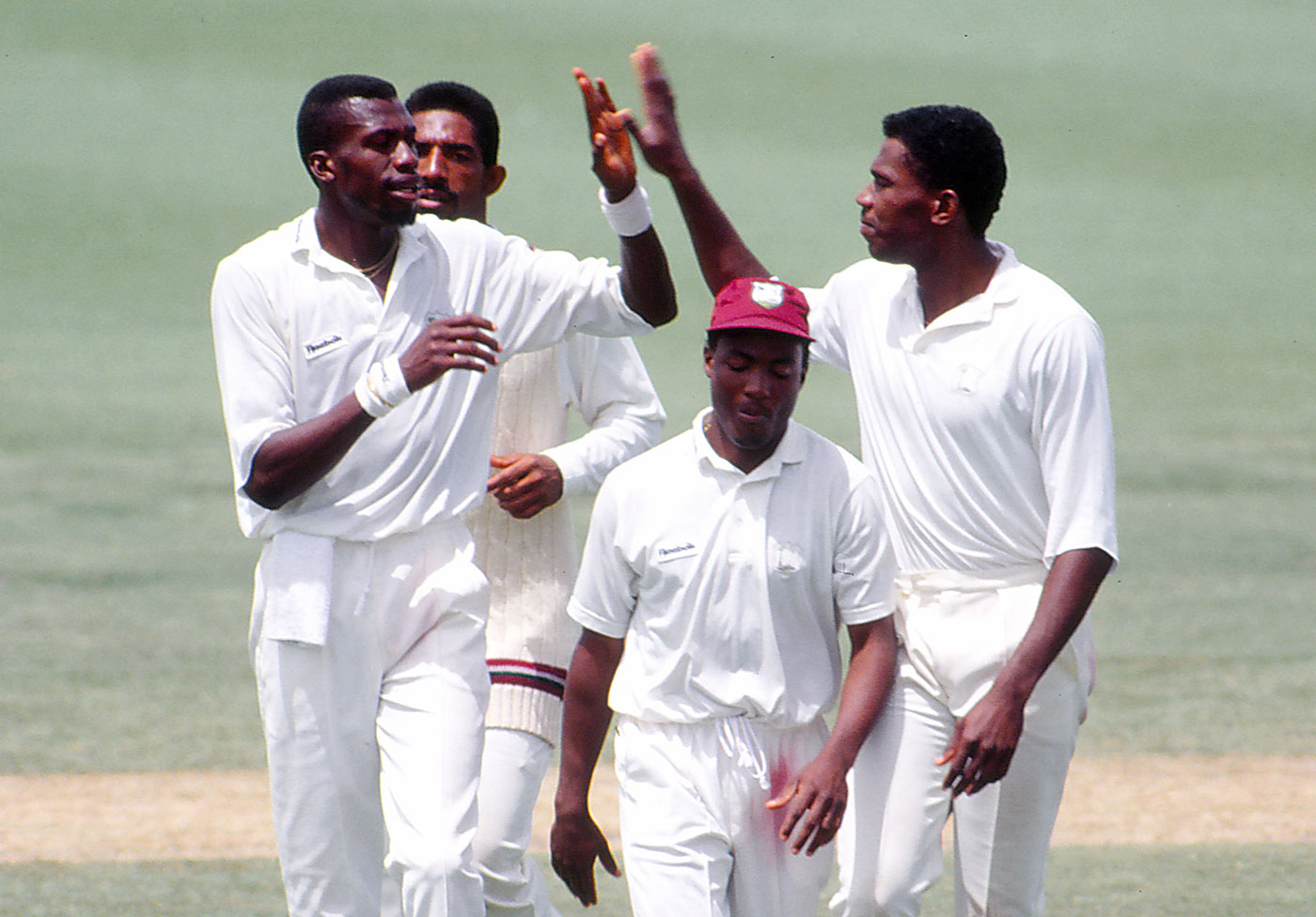 Time to strike: Curtly Ambrose celebrates one of 33 Test wickets down under in 1992-93 © Getty Images

The giant
Curtly Ambrose, Australia v West Indies, 1992-93
For anyone brought up on Roald Dahl, the sight of Curtly Ambrose's limbs vaulting towards the crease couldn't fail but bring to mind images of the BFG galloping towards Giant Country. Instead of little Sophie in his hands, Ambrose had a cricket ball, and on West Indies' tour of Australia he did some very, very unfriendly things with it. On the field, Ambrose was certainly no nice, jumbly giant.

English fans had got a first-hand taste of Ambrose's menace earlier, in 1991. It was hard to forget my first impressions of this enormously high man. At 6ft 7in, he is the same height as Steven Finn; in my childhood memories he is at least a foot taller.

With no broadcast or internet, I followed Ambrose's progress on Ceefax. A five-for in the draw in Brisbane; let down by his batsmen in the loss in Melbourne; tight on a flat deck in Sydney; then Adelaide: after six wickets in the first innings, it was his burst of three in 19 balls that set up the famous one-run win.

Perth. The series decider. A close-of-play search on Ceefax after the first day showed West Indies 135 for 1. Slow day. Must have rained. A closer inspection revealed one of the most astonishing bowling spells in Test history, one that sealed the series. Ambrose - bowling on his Golden Fleece of a wicket with the Fremantle Doctor nudging him on - took 7 for 1 in 32 balls. Now, with the glory of YouTube, that scorecard is brought to life: Mark Waugh edging a perfect length; David Boon fencing, bottom hand off handle, to gully; Allan Border falling first ball, drawn into playing at one that was too quick and seamed away; a loose drive from Ian Healy straight to first slip; Merv Hughes caught at cover; Damien Martyn edging to second slip; Jo Angel, on debut, edging behind. Series done. 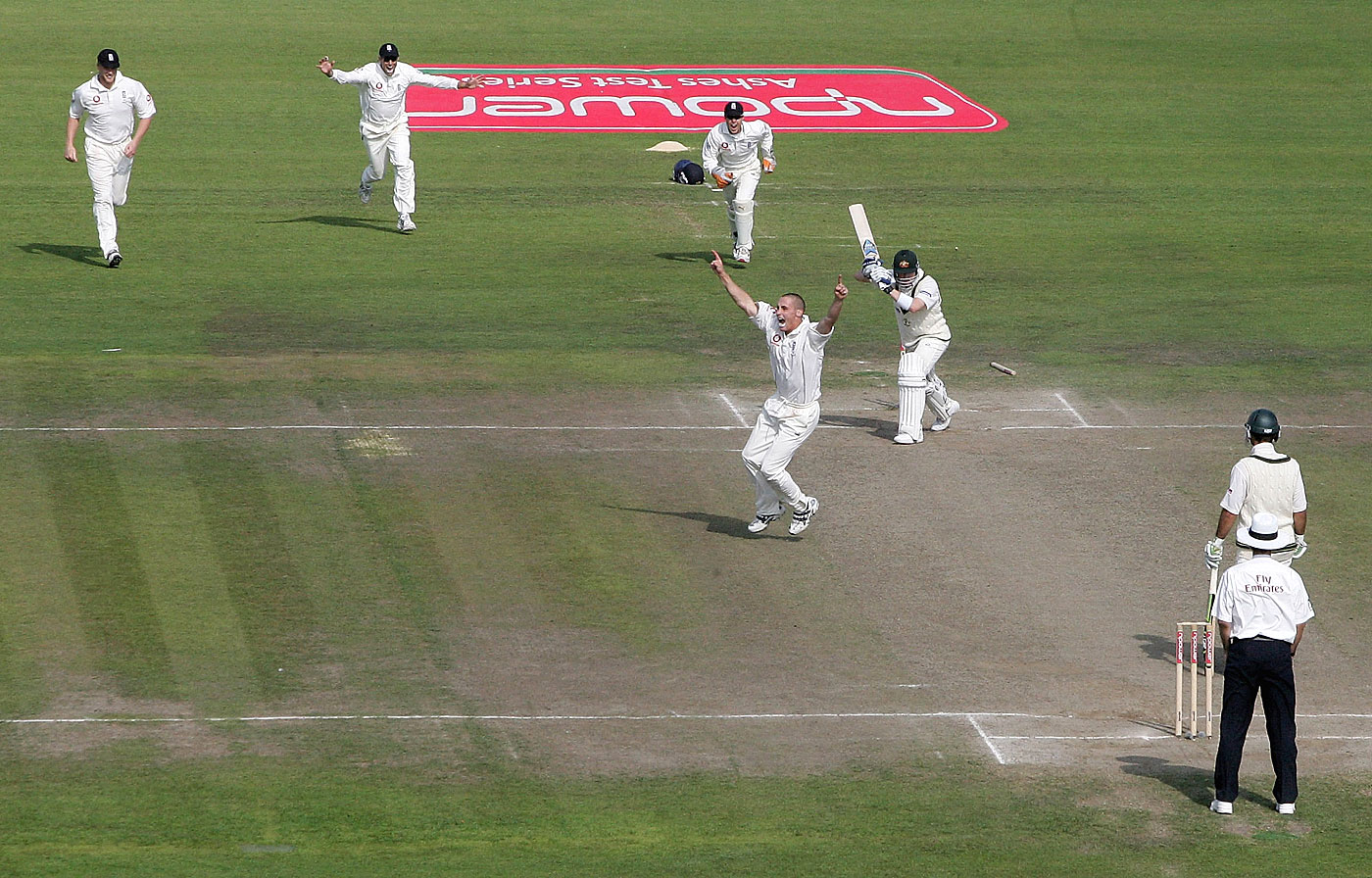 The reverser
Simon Jones, England v Australia, 2005
In a cruel parallel universe, where the Aussies have taken over the world and Shane Warne is Master of the Universe, Simon Jones would be remembered for the drop that cost England the 2005 Ashes.

Most England fans can tell you where they where that Sunday morning: shifting uncomfortably in front of the television, resisting all efforts to get on with their plans. Australia, dead and buried overnight, now needed only 15 runs to complete a remarkable victory and go 2-0 up. Then Michael Kasprowicz uppercuts Andrew Flintoff, Jones runs in from third man, time slows, Jones dives, the ball plops into his hands, time slows further, the ball plops out. Ashes lost?

Thankfully Geraint Jones eventually spared Simon Jones' legacy. Simon Jones played only 18 Tests, a career eaten up by horrible injuries, and contributed 26 wickets to England's victories in West Indies and South Africa in 2004. But it is the 2005 Ashes - his final Test series, aged 26 - for which he will be remembered.

Harimson was the brute, Hoggard the Labrador and Flintoff the enforcer, but it was Jones who possessed the black magic of reverse swing

The spine still shivers to his dismissal of Michael Clarke at Old Trafford. A run-up like a Rocky Balboa jogging montage, the moment's beat as he pauses in his leap, Clarke thrusting his front foot forward, bat jabbed upwards in an extravagant leave, the ball reversing, the off stump tumbling backwards like a drunk losing balance, Clarke's position set in disbelieving stone. Mark Nicholas in the commentary box: "That. Is. Very. Good."

Steve Harimson was the brute, Matthew Hoggard the Labrador and Flintoff the enforcer, but it was Jones who possessed the black magic of reverse swing. Australia's top order never got to grips with it, and Jones' 18 wickets - he missed the fifth to the injury that ended his international career - defined a series and a career. 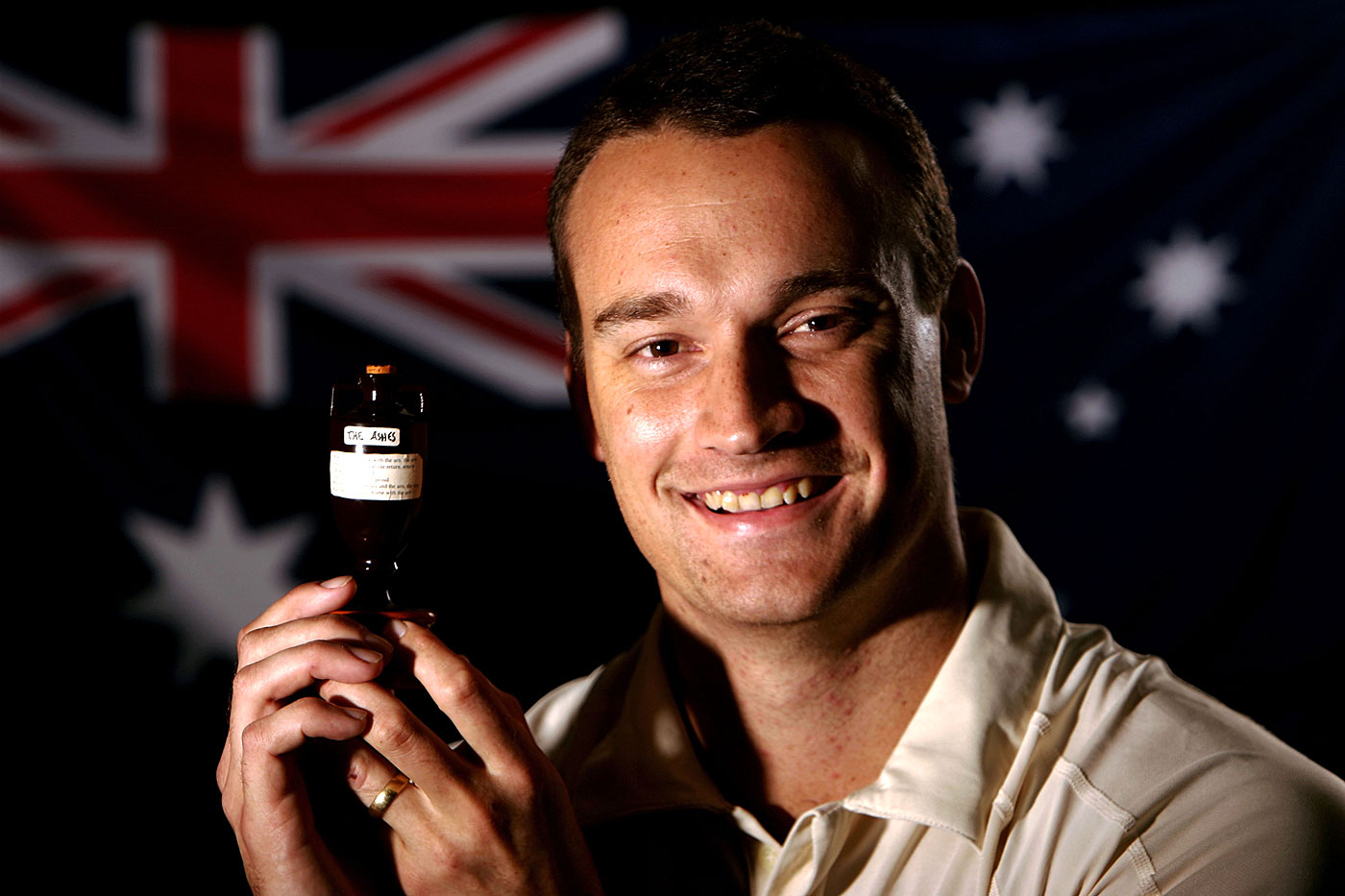 A wicket here, a wicket there: Stuart Clark's Ashes of 2006-07 was unforgettable © Getty Images

The metronome
Stuart Clark, Australia v England, 2006-07
Glenn McGrath we could take. Shane Warne, well, he was heroic whichever side you were on. Brett Lee and Jason Gillespie? Good blokes, good bowlers. But Stuart Clark? Aw, no mate. Not Stuart Clark.

Nothing against him, of course. But getting up in the middle of the night to watch England being destroyed by Warne, McGrath or Lee was one thing; watching a 31-year-old fella on Ashes debut knocking over the heroes of 2005 was quite another. Stuart F***ing Clark, as he quickly became more commonly known, was the bane of England in 2006-07. Even worse, his parents were English. Ugh.

He was a carbon copy of McGrath. All of the adjectives were the same. Consistent. Nagging. Accurate. Metronomic. "I'd rather get it on the right spot than bowl 150kph," he once said, and the universe groaned.

McGrath we could take. Warne was heroic whichever side you were on. But Stuart Clark? Aw, no mate. Not Stuart Clark

There were no match-changing spells, no running through the batting. Just a wicket here, a wicket there, until he'd chipped away so effortlessly that the England wall had collapsed: 3, 4, 3, 1, 3, 2, 2, 3, 3, 2, a wicket in all ten innings, 26 for the series, five more than McGrath, three more than Warne. In a close-fought series there would have been respect for his deceptive pace, steep bounce and shaky seam. In a whitewash? We never wanted to see him bowl again.

Clark tormented the openers, removing Alastair Cook and Andrew Strauss four times apiece, but one wicket lingers in the memory: in Melbourne, with the Ashes long gone. A jittery Kevin Pietersen, on 1, drove expansively at Clark, but the ball nipped back, thudding into off stump. England's 2005 hero, brash and arrogant, castled by Australia's 2006-07 hero, quiet and undemonstrative.

Clark played only 15 further Tests after that series as injuries and younger, sexier bowlers took over. But for two months, Stuart F***ing Clark was the unlikeliest best bowler in the world. 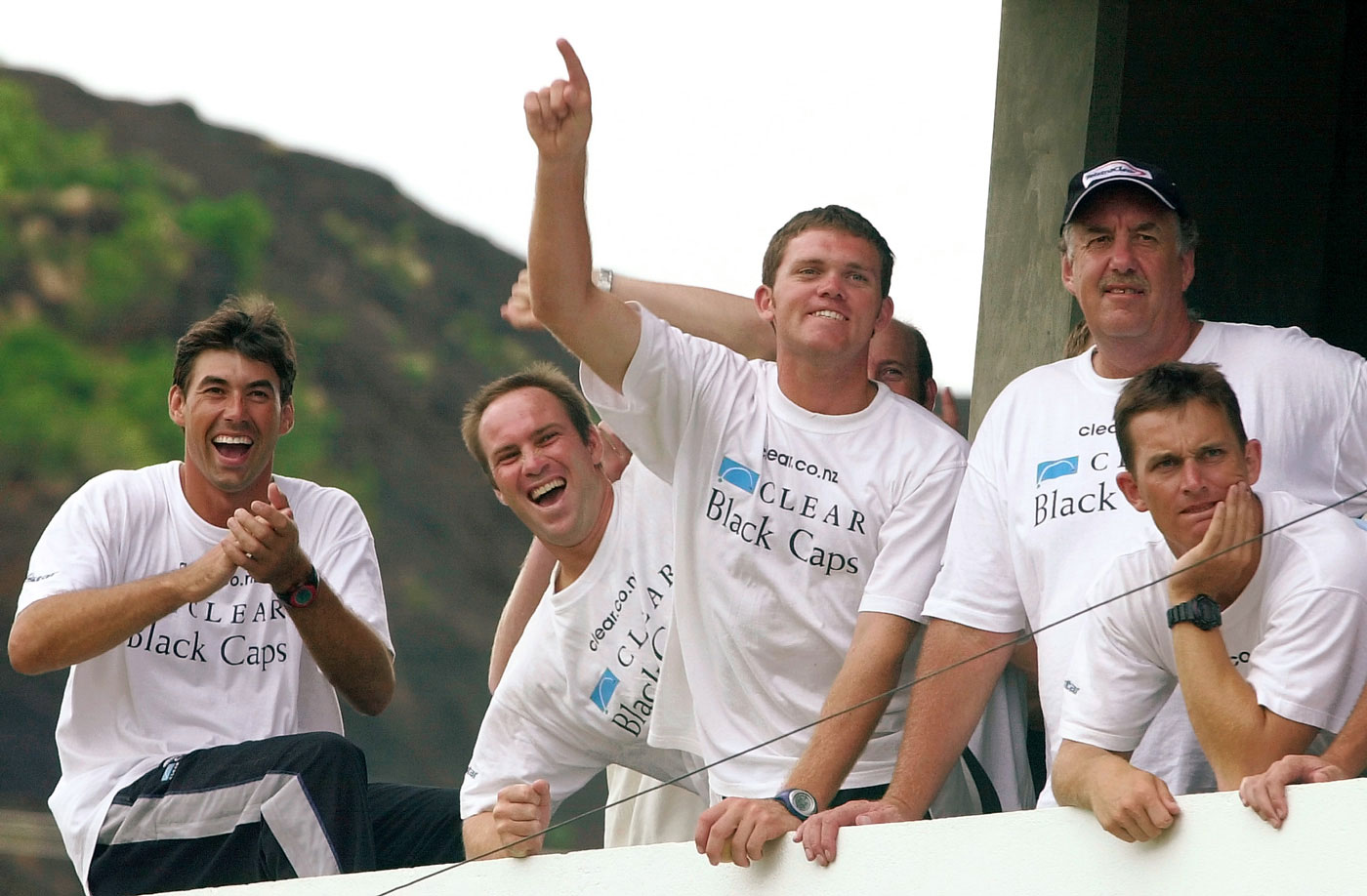 Why so serious? Shane Bond (far right), was celebrating 12 wickets by the end of the 2002 series in the West Indies © Associated Press

The speedster
Shane Bond, West Indies v New Zealand, 2002
We all wanted Shane Bond to be great. Not just good but great. In 2002, New Zealand, for so long starved of greatness, found themselves a menacing pace bowler who could win them series. Bond had played only four Tests when New Zealand headed to the West Indies. Only two matches were scheduled, but that was enough to alert the world to Bond, Shane Bond.

Long legs kicking, like Richard Hadlee, head leaning to the left on delivery, like Darren Gough, Bond was as quick as Brett Lee and as persistent as Glenn McGrath. In Bridgetown he announced himself with his first ball, which whizzed past Chris Gayle's stationary outside edge. In his third over, as he regularly touched 90mph, Bond forced Gayle into a loose drive to cover, and then, next ball, was too quick for Ramnaresh Sarwan, who mistimed a pull to mid-on. He saved his best for the second innings, where his 5 for 78 included one of cricket's rarer sights: a set Brian Lara beaten for pace.

New Zealand, for so long starved of greatness, found themselves a menacing pace bowler who could win them series

He delivered New Zealand their first victory in the Caribbean, adding Carl Hooper and Shivnarine Chanderpaul to his victims in another five-for in the drawn second Test, in Grenada. With Bond on the verge of becoming great, it looked as if we were all getting what we wanted.

The following year, after he had taken 6 for 23 against Australia in the World Cup, a back problem forced him out of the game for a year. Injuries worked their way across his body, and he played only seven more Test series over the next seven years. Like Simon Jones, his career ended on 18 Tests.

Daniel Brigham is a journalist and editor. @dan_brigham 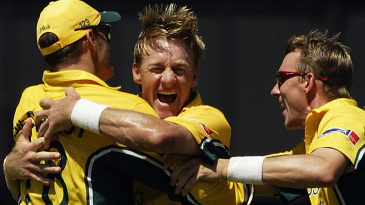 They came, they conquered, they vanished 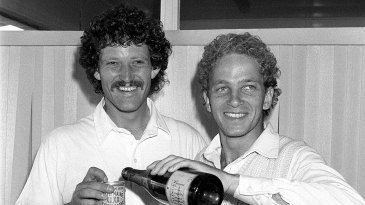 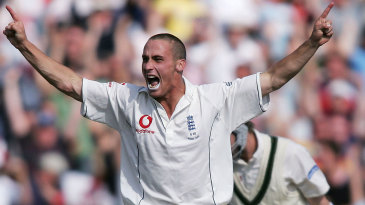 'Being involved in '05 defined my career'

Former England fast bowler Simon Jones talks about his short-lived Test career, battling injuries, and the captains and coaches he has played under