Cricket in Kapiolani Park, with the Diamond Head crater forming the backdrop

I left India for graduate school in the United States in the late summer of 1983. On the last leg of my journey, from London to New York, the gentleman sitting next to me in the airplane happened to be an Englishman and we fell into conversation. Eager to discuss the exploits of Kapil's Devils, I excitedly asked him if he'd caught any of the recent World Cup. "Sorry mate, more of a footy fan myself," he said laconically. I can't swear to this but I seem to recall him subtly angling away from me and losing interest in any further chit-chat. The episode would prove to be prophetic about my life thereafter as a cricket fan in places where the game didn't count for much.

There was at least a thriving cricket league in upstate New York. Despite my well-proven ineptitude at the game, I joined the usual motley crew of subcontinentals, a few Aussies, Kiwis, Brits, and the occasional wild card ("Really? They play cricket in Helsinki?") at my university. I vividly recall my final cricket match, in 1989.

We drove over to Rochester to play against a largely West Indian outfit, some of whom had clearly played cricket at a very high level before coming to the US. They batted first in splendid sunshine and clobbered the living daylights out of our bowling, getting something like 200 runs in 25 overs. Our palms red and our feet sore, we retired to the shade of the trees for lunch. Our hosts feted us with fabulous jerk chicken and spicy curry with rice, which was washed down with Red Stripe beer. Reggae blasted out of the boom box and we marvelled at the double-jointed elegance of the men and the oomph of their dancing partners.

Just as our innings began, the temperature dropped and a chill breeze set in, as often happens in upstate New York in summer, and the sun went behind dark clouds. Their fast bowlers scythed through our top order and our only hope, a portly Mumbaikar, ran himself out taking a chance on the arm of a Gus Logie-ringer patrolling the covers. By the time I went in to bat it was so cold that I had my fall jacket zippered all the way up to my chin. It was hard to know if my knees were clattering because of the cold or the sight of the fast bowler at the top of his run. I think I remained unbeaten on 1: a fitting epitaph to an inglorious career.

A few months later, I joined the University of Hawai'i and moved to sunny Honolulu. I quickly found out from friends that there was a small but vibrant cricket club with a storied history in town. Every Sunday one corner of Kapiolani Park, a soccer field sandwiched between Diamond Head crater and the sprawl of high-rises flanking Waikiki Beach became a cricket ground.

Here, 30-odd guys from the subcontinent, Australia, New Zealand, England, Fiji, Guyana, Singapore, Malaysia, Kenya and elsewhere, dressed in proper cricket whites, kept the game alive. But in fact, cricket in the Sandwich Islands, as the Hawaiian Islands were then known, had been played from as far back as the 1840s by English merchants, plantation owners, Scottish engineers and missionaries, not to mention Hawaiian royalty (King Kamehameha IV was a major enthusiast). The Honolulu Cricket Club was officially formed in 1893, and their cricket ground has to rank among the most stunning in the world. In a delicious throwback, the club recently hosted a visiting team of sailors on shore leave from an Australian ship. Honolulu: where it's cricket season all year round © Sankaran Krishna

With its fabulously green landscapes (think a warmer New Zealand or a cooler Sri Lanka) and balmy trade winds, Hawaii was almost a perfect place to play cricket all year round, but I no longer did. A young family and a new job meant an hour or two at the tennis courts on the weekend was more negotiable than an entire day on the cricket field. Of course, I remained an addicted follower.

Following cricket as part of a diasporic group in one of the more remote areas of the world has its peculiar charms. Back in 2003, during the World Cup in South Africa, a group of us decided to pool resources to get a satellite connection. Given the time difference, most games went on through the night and watching them with people from a spread of nationalities made it all the more fun.

On the day of the long-awaited India-Pakistan encounter on March 1, I was flying back to Honolulu from the continental USA. I desperately wanted to watch the match live, but there was no way of doing that. So a friend videotaped the entire match and left the tapes in his mailbox. When I got off the plane I drove straight to his house, picked up the tapes and settled down to watch the game at home, with no idea of what had happened. Even as Dravid and Yuvraj calmly carried us across the finish line my heart was in my mouth waiting, as every Indian fan does against Pakistan, for that moment when it would go all pear-shaped.

A few weeks later, the lot of us reassembled one last time to watch the final. I remember the groan that went up from us desis when Sourav called correctly at the toss and decided India would field. When Ponting's lacerating assault took the Aussies to 359, we were as forlorn as the men in blue; the moment Sachin skied his fifth ball back to McGrath, all hope died. It was easily one of the longest nights of my life.

Fast forward eight years to 2011 and another World Cup final featuring India, this time at the Wankhede. Another all-nighter loomed, but a lot had changed in the interim. Satellite hook-ups, video recording, the pooling of resources and watching as a group were unnecessary - all you needed was a computer or a smartphone. I watched the match alone on my desktop. The horizon was just beginning to brighten when Dhoni launched the winning six into the stands. I threw my hands up in a soundless scream of exultation. It was still very early in the Hawaiian islands and in my quiet neighbourhood everyone was fast asleep.

When not teaching political science at the University of Hawai'i at Manoa, Sankaran Krishna writes on cricket for ESPNcricinfo's Cordon 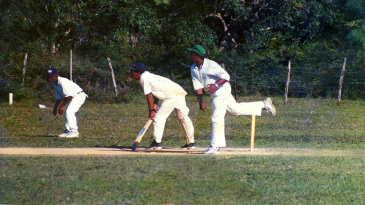 The joys (and sorrows) of cricket in the Belize River Valley 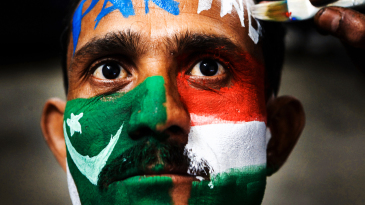 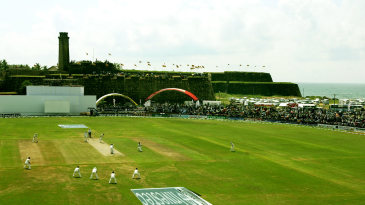 Which is the best ground to watch cricket in?

There are pretty grounds, historic grounds, grounds that ooze atmosphere, and those that make you feel like you're in the Colosseum. Five writers choose their favourites