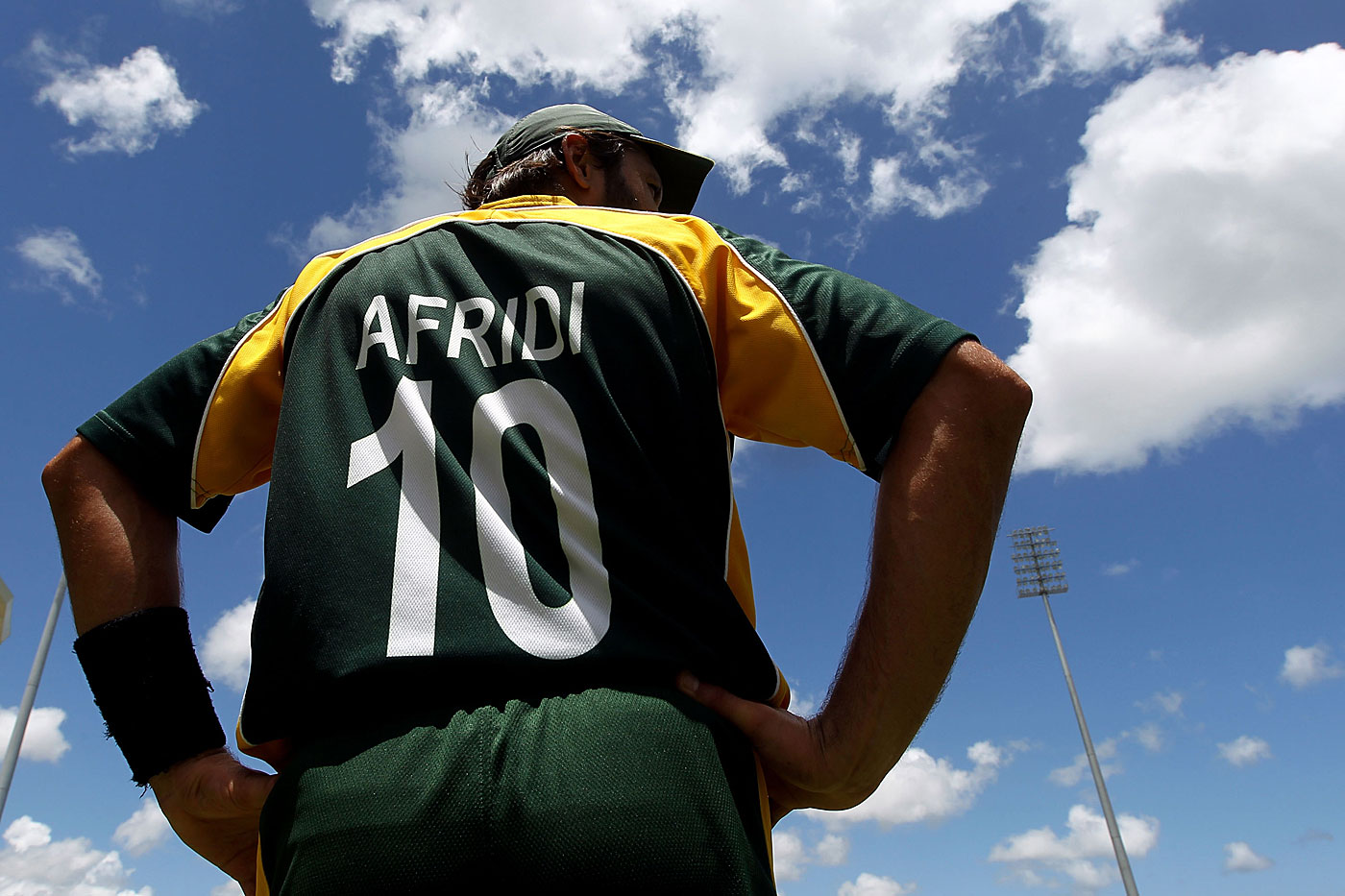 Start swinging: Shahid Afridi strikes it big in the the first ten balls he faces

Eye-popping stats from the first 11 years of T20 internationals

88-64
The win-loss record for teams batting first in T20Is between the ten Test-playing teams since 2012. 17
Free-hit balls bowled by Morne Morkel, the most by any bowler, though he has conceded only 25 runs off those.

Sohail Tanvir is next highest with 16, but he has responded even better, conceding only 18. The most runs conceded off free-hit balls by any bowler is 29, by Ravi Rampaul (from 11 free-hit balls). Wayne Parnell has gone for 20 from eight, Umar Gul for 21 from nine, and Sunil Narine has done worse than them all, going for 20 from five.

3.91
Percentage of overs bowled by spinners in the Powerplays till 2009.

150.17
Shahid Afridi's strike rate in the first ten balls he faces every innings, the highest among all batsmen who have scored at least 500 runs.

Darren Sammy is next, with a strike rate of 141.46. The top few are mostly middle-order biffers but the surprise is Kane Williamson, who has a strike rate of 130.36 in his first ten balls, which puts him sixth on this list. 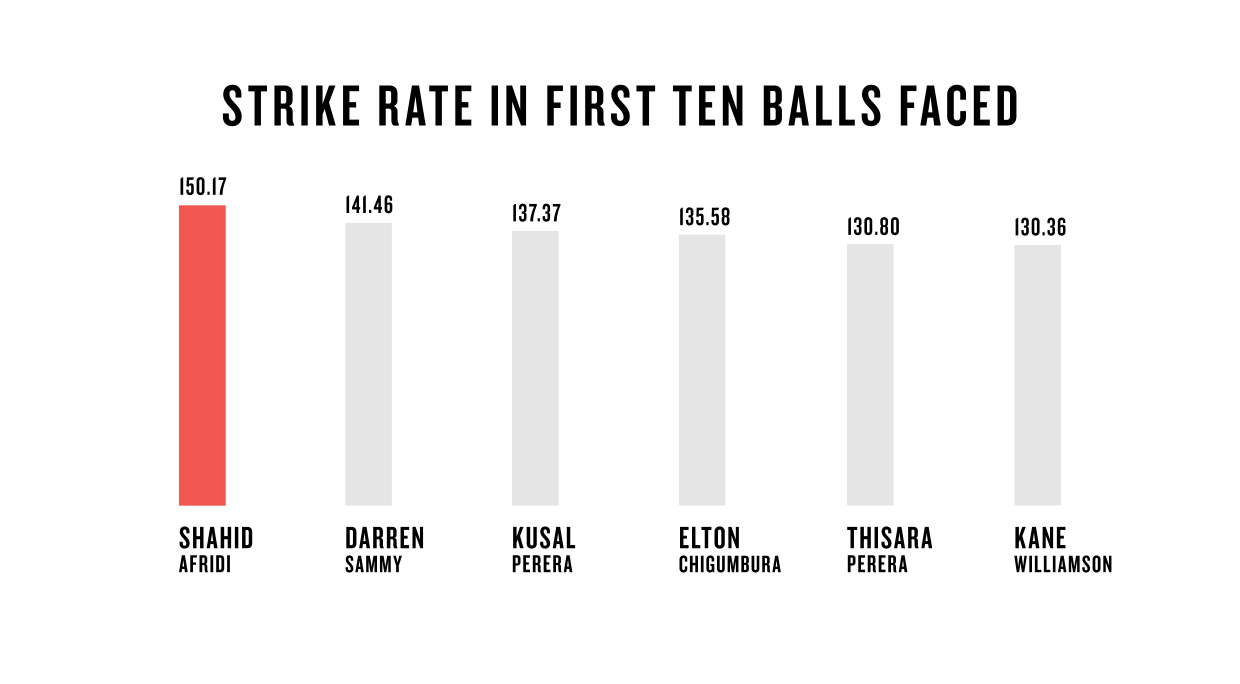 440
Craig Kieswetter's strike rate in free hits, the highest among batsmen who have faced at least four such deliveries.

Kieswetter has scored 22 from five balls, which includes three sixes. Shane Watson has 13 runs from four, while Ross Taylor has 12 from four.

4.93
Saeed Ajmal's economy rate during Powerplays, the best among spinners who have bowled at least 30 overs in the period since January 2010.

Among the bowlers who are likely to play the World T20, Samuel Badree has the best economy rate, of 5.59, in Powerplays, followed by Shakib Al Hasan, with 6.05.

-1.49
The difference between Samuel Badree's economy rates in the first four and the last two deliveries of an over in T20Is. 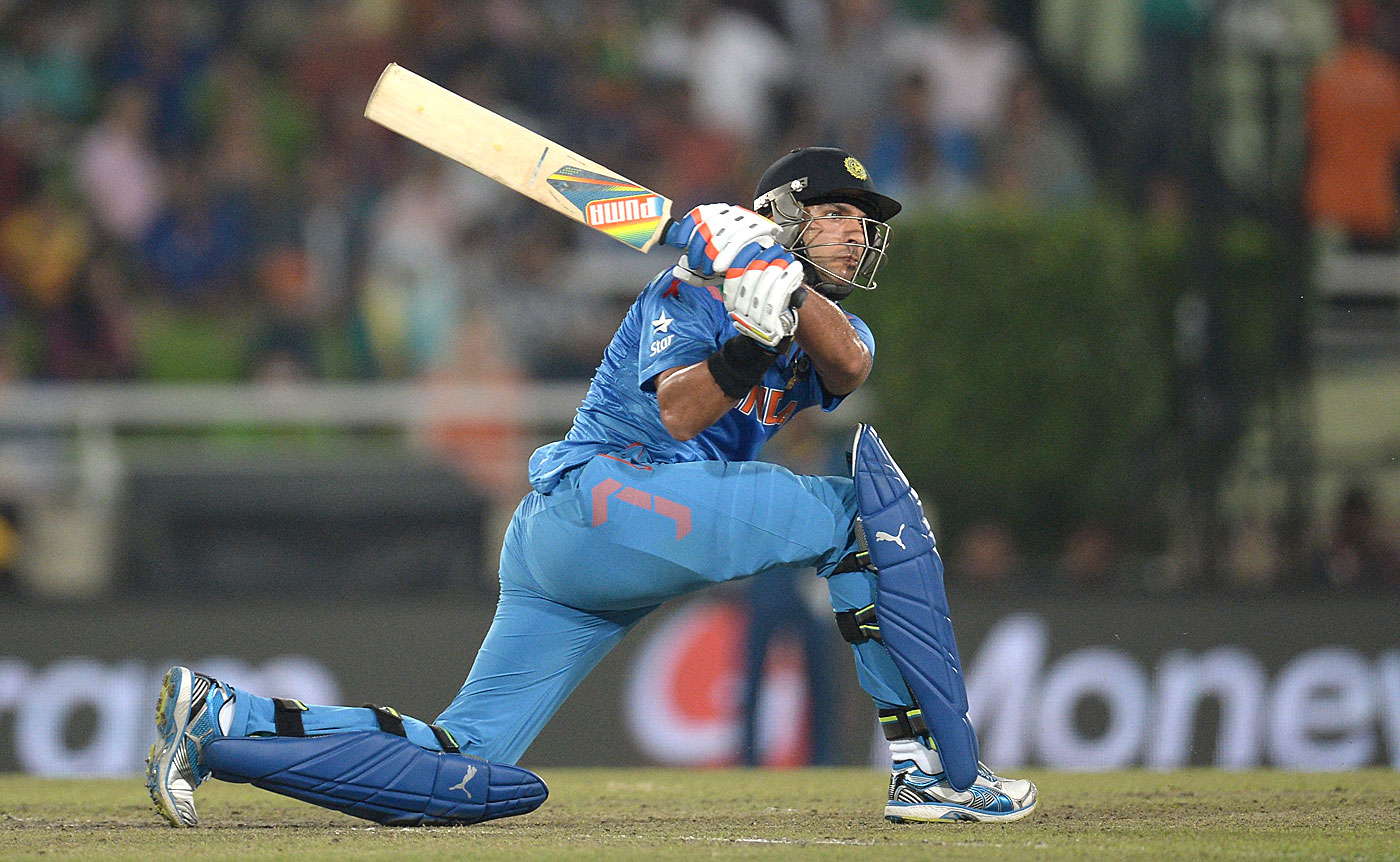 6
Fewest runs defended in the last over to win a T20I featuring two Full Member teams.

This has been achieved twice, both times by South Africa against New Zealand. Marchant de Lange conceded three when New Zealand needed seven to win in Auckland in 2012, while Dale Steyn conceded four in the World T20 in Chittagong in 2014. The fewest defended in any T20I is five, by Oman's Bilal Khan against Hong Kong.

77.2
The difference in strike rates between the first ten balls and the rest of the innings for England's Luke Wright, the highest for all batsmen with 500 runs. 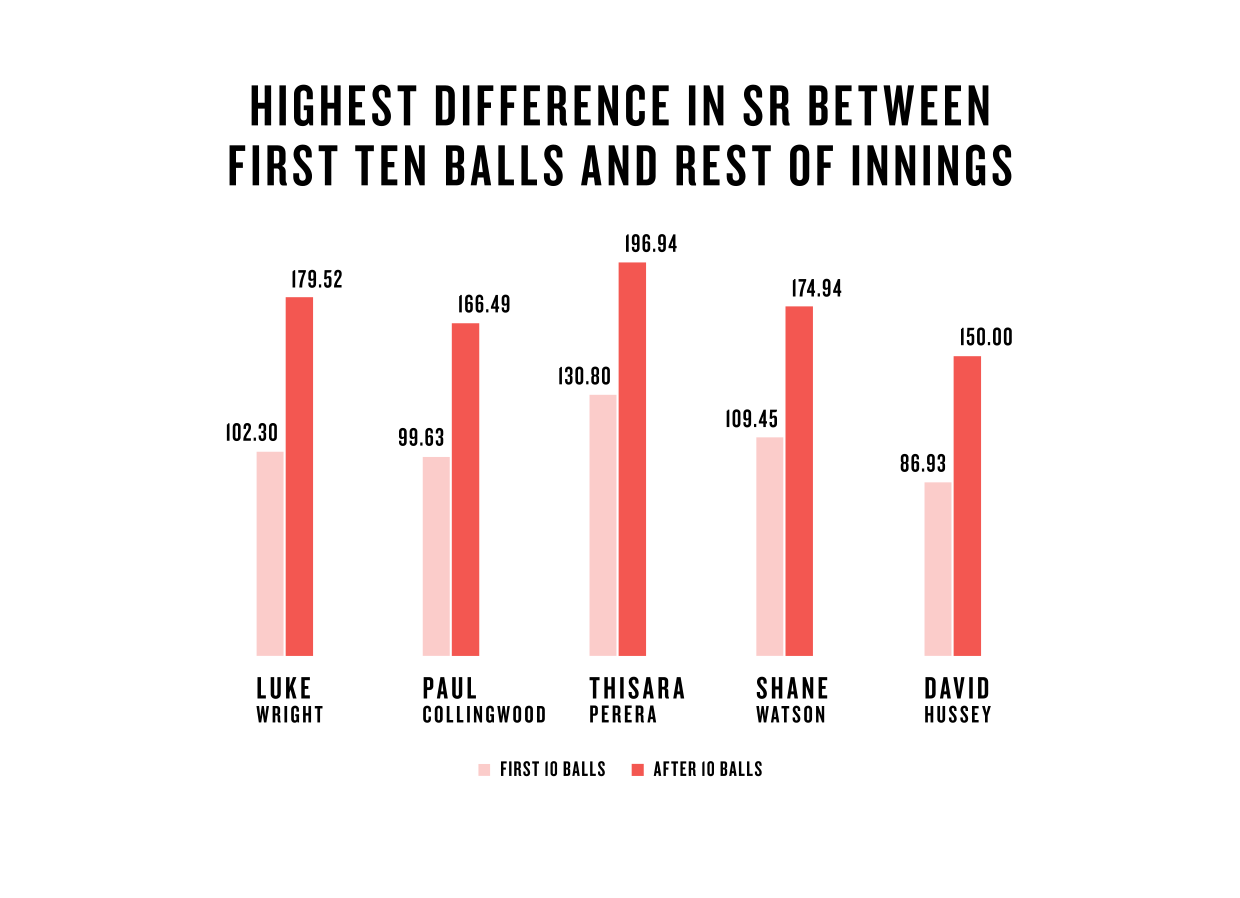 8
Number of run-outs that Darren Sammy has been involved in as a fielder - the highest among all players.

Tillakaratne Dilshan is next with seven, while Dwayne Bravo and David Miller have been responsible for six run-outs each. Those are the best among non-wicketkeepers. Among wicketkeepers, MS Dhoni tops with seven.

(Note: Only the fielder who threw the ball to the wicketkeeper, bowler or fielder - or one who pulled off a direct hit - is included in this count. For wicketkeepers, this includes only those instances when they effected a direct hit.)

-5.66
The difference in strike rates between the first ten balls and the rest of the innings for Sri Lanka's Kusal Perera

Perera is one of three batsmen with such an unusual scoring pattern; Afridi and Williamson are the others. Afridi has a strike rate of 150.17 in the first ten, which drops by about 4% to 144.20 later, while for Williamson the drop is about 2%.

6
Number of times New Zealand and South Africa have each defended targets when the opposition needed between six and 15 to win off the last over.

New Zealand have six wins in seven such games, while South Africa have six out of 12. New Zealand have also lost five of ten when they have chased such targets in the final over, while Pakistan have come out second best most often - nine out of 19 times.

97
Runs conceded by West Indies off free-hit balls, the most by any team.

Zimbabwe have the best run rate off free-hit balls, followed by India. In terms of the difference between the run rate and economy rate in free hits, Australia are slightly ahead of Zimbabwe, while Bangladesh and West Indies are the poorest.

11
The over after which teams batting first normally double their score. 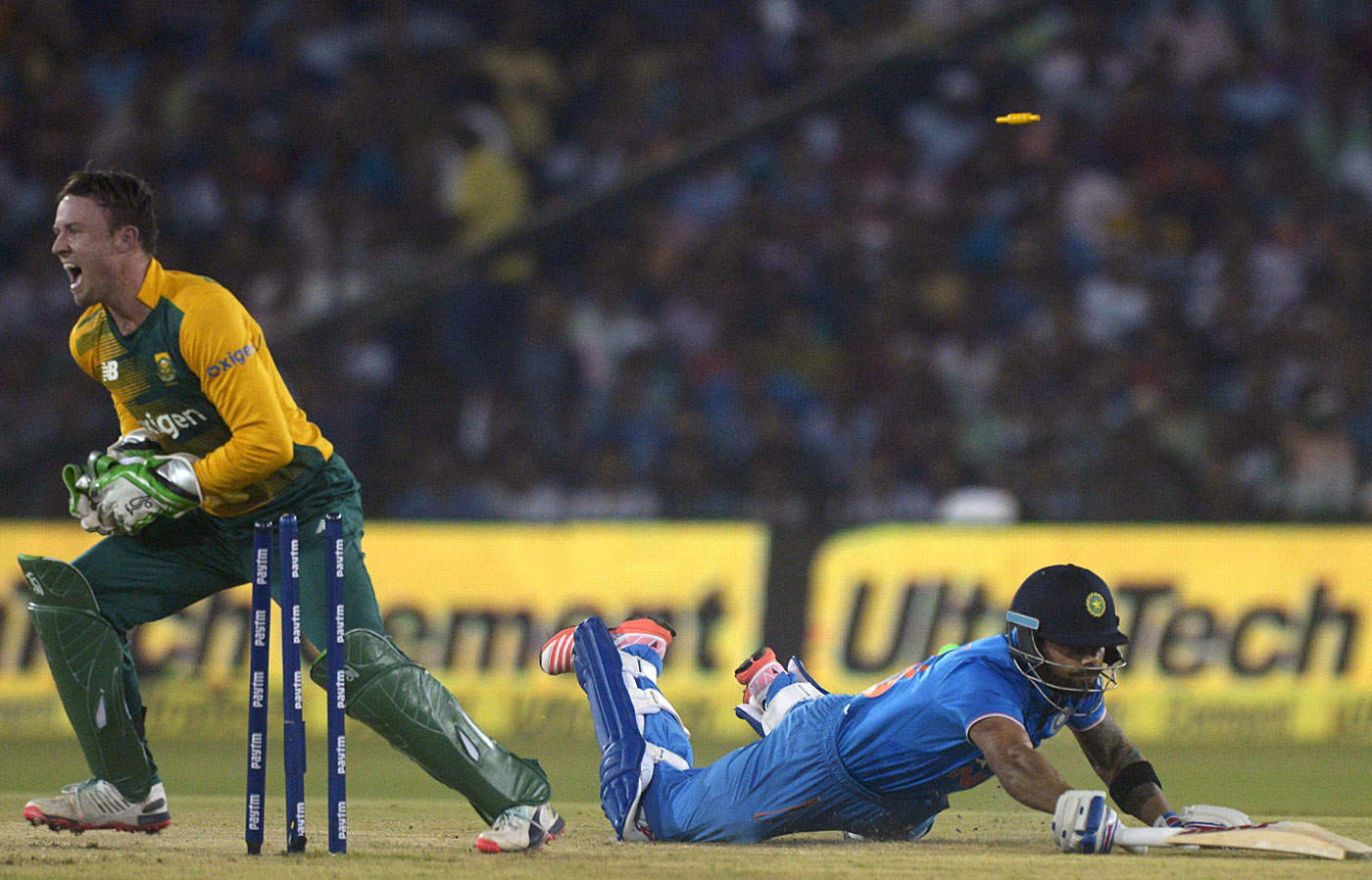 64
The percentage of dots for Chris Gayle in the first ten balls he faces, the highest among all batsmen who have scored at least 500 T20I runs.

The top five in this list are all openers, which isn't surprising considering they bat against the new ball when the fielding restrictions are also in place.

17
Imran Tahir's strike rate, or balls per wicket, between the seventh and 14th over.

The top six in terms of strike rates includes the Hussey brothers, Yuvraj Singh, Eoin Morgan and AB de Villiers. Among the 29 batsmen who are in this cut-off range, MS Dhoni's strike rate of 144.85 is at 26th, while Afridi's is at 21st, with a strike rate of 150.73. In terms of six-hitting in the last six overs, Yuvraj is the best, with one every 7.47 balls. Dhoni hits one every 19.86 balls, and Afridi one every 11.39.

Narine has conceded a six every 23 balls during this period. Mashrafe Mortaza has the poorest economy rate in the last six (10.81), followed by Dwayne Bravo (10.16). 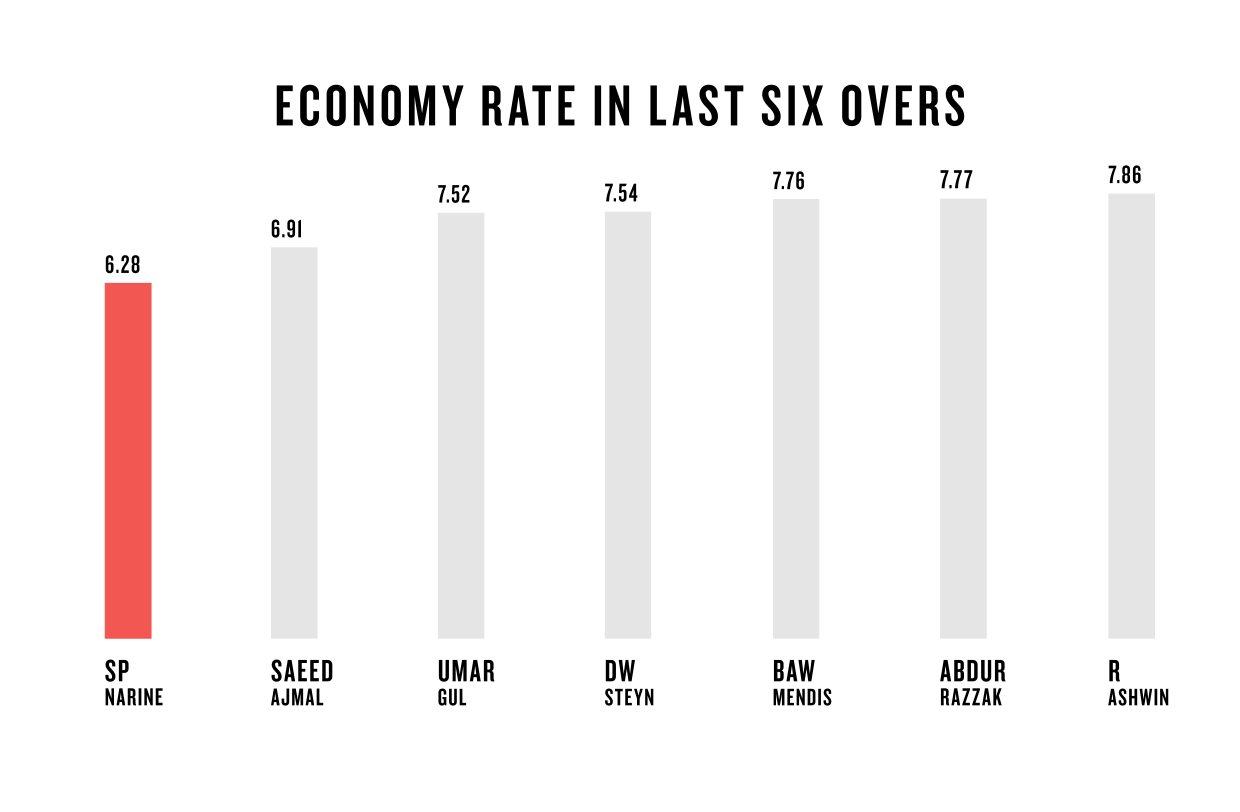 17
Most runs that a bowler has failed to defend in the last over.

Saeed Ajmal went for 23 when Australia needed 18 to win in the last over of the World T20 semi-finals in 2010, and Nasir Hossain went for 18 in similar circumstances against Zimbabwe last year.

18
The difference between run-outs effected by South Africa in the field, and run-outs of their own batsmen - the highest positive difference for any team.

*March 5: Dawlat Zadran's dot balls were erroneously mentioned as three instead of four in the table. This has been corrected 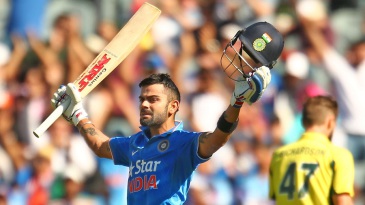 Why Kohli is the best T20I batsman around 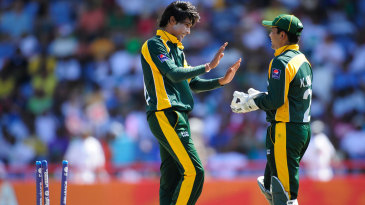 Everything you wanted to know about the T20 over 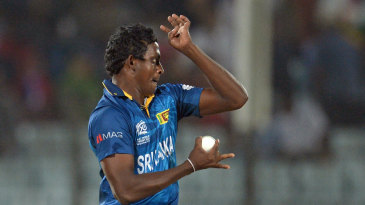 The most and least productive overs in T20Is

An over-wise analysis of T20 internationals, and the best overs for batsmen and bowlers in this format