About a bully boy

At his best Matthew Hayden resembled a big, nasty brute terrorising a bunch of kids. Where was the joy in that?

By nature I'm somewhat pessimistic, but even I have to admit that not everything is getting worse. And I'm genuinely delighted that it's no longer acceptable to pick on a person simply because they belong to a certain group, to make crude generalisations about them, to subject them to mockery and ridicule. But surely there is one category of person who it is okay to loathe, on principle. I speak, of course, of the bully. Everyone who has been to school or worked in an office knows the type - big, bull-necked, barrel-chested, fists like sledgehammers made of sausage meat. Often, but not necessarily, as thick as two short bricks.

You'll have your own versions of the template. My school had "Gaz" Martin, a cheerful oaf who always wore a friendly smile as he punched you in the face and spat in your rice pudding. He and his type ruined school for many kids, filling their days not just with the physical reality of the dead leg and the back-of-the-head slap, but with the fear and anxiety that went with knowing there was someone around who could do whatever he wanted to you, whenever he felt like it.

So, no one would stick up for the bully, which makes me feel like I'm on safe ground when I nominate Matthew Hayden as the cricketer I love to hate.

Standing at slip our devoutly Christian hero would spit out c-words with witless, joyless monotony, like the worst phone sex you've ever had

It might seem a little odd to think of a batsman when discussing the cricketing bully. Would it not be more obvious to point the finger (from a safe distance) at a fast bowler? And I did, from the late-'70s to the mid-'90s, come close to hating the various combinations of grimly wonderful West Indian fast bowlers. They were simply too good. Too good for my heroes, Botham and Gower. But with a couple of exceptions the West Indian quicks were too sublime to feel like bullies. They were just wonderful at their job, whether achieved with the grace of a Holding or the sheer intellectual brilliance of a Marshall. And then there is also the knowledge that these were decent people, who had endured much to earn their glory.

Other fast bowlers might deserve the title bully - Jeff Thomson, perhaps, at his terrifying best, as happy to brutalise club cricketers as to neuter poor "Bumble", turning his ruptured gonads into the sort of thing you'd dunk your tortilla chips in. Perhaps Charlie Griffith was similar.

But, still, bully just seems the wrong word to describe any of these cricketers. It belongs truly to Hayden. Have bat, will mow into submission © Fairfax Media/Getty Images

Back home with the wife and kids he may be as gentle and delicate as a dandelion clock, a lover of poetry and pottery, a piper on the piccolo, an aficionado of Monteverdi, a dabbler in watercolours. But that doesn't matter - I'm talking about Hayden's on-field persona, and I'm going to pretend that that's all there is, that he looks like an ogre because he is an ogre, that within the bestial exterior, there is a slightly smaller beast, the hateful Russian dolls continuing right down to the atomic level.

Okay, let's get this out of the way. Hayden was a damn fine cricketer. His start may have been ropey, but after he got going, he was the most brutally effective opener in world cricket. At his best he could appear invulnerable, as well as unstoppable. Against even the quickest bowlers he'd walk two, three steps down the track, plant himself, then, if the ball was up, muscle it in the arc between extra cover and midwicket. If the bowler dropped short, he'd cut or pull it hard and high. And even in defence there was a belligerence: his was an angry forward defensive. He'd fill the wicket, fill, at times it appeared, the whole square, making it seem that there was just no way to get him out. He looked like a sixth-former playing with the first-years. And not playing nice. Standing at slip our devoutly Christian hero would spit out c-words with witless, joyless monotony, like the worst phone sex you've ever had.

I once asked loveable moptop Matthew Hoggard which batsman he most dreaded bowling to. He said, without hesitation: Hayden. "It was the way he came at you," he said. "Bloody terrifying."

It was machismo, it was testosterone, it was: "I'm more of a man than you are." It was horrible

And that's what it was. Batting not as the exercising of grace, or even the mathematic compiling of statistics. It was machismo, it was testosterone, it was: "I'm more of a man than you are." It was: "Give me your dinner money, and have this punch as payment." It was horrible.

If you watch the highlights of Hayden's world-record 380 in Perth in 2003 - against, in true bully-boy style, Zimbabwe - you can clearly hear that nearly every six he heaved over long-on or long-off was accompanied by an almost carnal grunt. It was the exact same guttural sound that Gaz Martin emitted when giving a dead arm to some poor waif, back in the schoolyard. And when Hayden hits the run that takes him to the record, you can see from the very muted applause, and the total lack of handshakes, of back slaps, of smiles, what the Zimbabwe players thought of him.

In capturing Hayden's spirit, I almost prefer to quote the man. There's the way he referred to his straight drive as his "bowler killer". And who would not delight in Matty's account of the joy he brings into the lives of others, such as the little boy who has secured the great man's signature (taken from his own website): "His amazing little face, beaming with gratitude, made me realise how powerful is the great gift of giving which is the core philosophy of The Hayden Way." And let's not forget the squatting, which was evidently not reserved just for when he took guard Hamish Blair / © Getty Images

However, none of this quite reaches the sublime comedy of one contribution he made when stepping into the Test Match Special commentary box, in 2009. It was one of those dressing-up days, and for some reason, the look du jour involved biblical beards. "That looks like Moses over there," said Hayden. "Hey, Moses, where's your ark?!"

But the real joy, the payoff, if you like, in hating Matty Hayden is that for once the bully boy got his comeuppance. Usually, outside of cowboy films and boys' adventure stories, the bully does fine. They'll go through school picking on the little kids, and then get a job as a management consultant or Tory MP. But for Hayden there was justice. There was the 2005 Ashes series, when the worm turned, when the bully was made to grovel. It began in the one-day match in Edgbaston, when Simon Jones threw the ball at the stumps and tragically hit Hayden in his grotesquely pumped chest. Hayden was outraged, but then quailed when confronted with a bit of England team solidarity. From that moment on, he was lost. His attempts to assert himself over Hoggard kept ending up in the hands of short cover, and the series was won.

Of course there were good days after that for Matty. He finished up with a Test average of over 50. He's a modern great. But it didn't matter, for me, at least. Goliath had tasted the dust.

Anthony McGowan writes novels for adults, teenagers and younger children. He is a keen but ungifted member of the Authors XI cricket team He is un-sexy, he talks gobbledygook, he is Justin Langer, he is me

Langer personifies the worst in Australian cricket culture, as well as its best. Nobody knows this better than fellow Western Australians 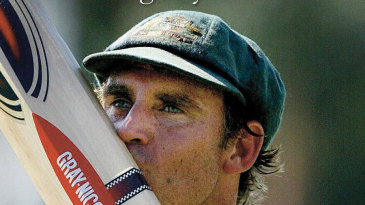 Preaching to the unconverted

God-fearer and man-baiter - this book shows both sides of Matthew Hayden, a man who mostly chose to behave whichever way suited him 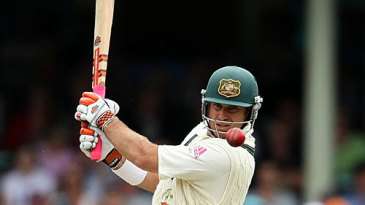 Hayden among the savages

Where did Australia's belligerent opener rank among others of similar vintage and style?