Naming rites: scoreboards usually introduce us to a player's initials

Cricket has a way of winning a child's heart. It certainly captured mine. I remember the simple pleasure of feeling bat on ball, the thrill of the paintless cork compo speeding from the sweet spot as I slogged, cross-batted, to square leg - long before I understood the purpose and method (and beauty) of playing straight. I remember the thrill of watching as that ball, bowled with the flick of a supple juvenile wrist, turned the wrong way. Did I really do that?

The love grew. I could not get enough of cricket on radio and TV and in the newspapers. I was drawn to the great cricketers of the early 1970s, amazed by their skill, their power, their grace. I copied them: the cobra wrist of DK Lillee, the back-and-across of IM Chappell.

I learnt the game's elements, its idiosyncrasies, the things that make it cricket. I was captivated by peculiarities like that most remarkable document, the scorebook, and learnt to make sense of the digits and dots and tallies that go here and there as a way of keeping account of an innings and a match. I observed the scorer's sense of duty, the reverence for accuracy. I came to understand the place of the HB pencil and eraser in cricket.

I discovered cricket history. The local library had a heavy green book (I think it was it compiled by Jack Pollard) that had the scorecard of every Test ever played. I was intrigued: scorecards with the names of legendary players making runs and taking wickets. For each new Test series I bought the ABC Cricket Book, a must-have for any Australian cricket enthusiast. Apart from articles and player profiles, it contained statistics and blank scorecards that I could fill in myself. The book was full of records. Alphabetical lists of cricketers with their careers represented in innings and averages and fifties and hundreds. And tables highlighting "Most Wickets" and "Hat-Tricks" and "Record partnerships - MCG" and "Scores of over 250 runs in the fourth innings".

I discovered an old yellow(ish) Wisden in a library. I could not fathom the level of genius required to come up with a publication like this. The greatest book ever compiled! And there is a new one every year. I started to read about cricket - in newspapers, in magazines and, later, in books. My father had quite a few cricket books from his youth so I delved into The Ashes Crown the Year, the story of the 1953 Ashes by Jack Fingleton, who my father said was a very good cricketer himself.

I noticed that in many publications it was the tradition to include all of a player's initials in the scorecard. IM Chappell. GS Chappell. DK Lillee. In some cases that meant more than two initials. MHN Walker might have been known as "Tangles" but his name was Maxwell Henry Norman. I liked that. MC Cowdrey, playing for MCC, is watched by wicketkeeper APE Knott as he takes a catch at slip to dismiss Central Province's T Morrell off the bowling of DL Underwood in Kandy, 1969 © PA Photos

The first series I remember in considerable detail is the 1974-75 Ashes. England had three players with three initials. There was KWR Fletcher (Keith William Robert) and APE Knott (Alan Phillip Eric). RGD Willis, I later learnt, had added Dylan to Robert George because he so loved the music and lyrics of Bob Dylan.

And so my appreciation of the multi-initialled cricketer was born. I discovered that the much-loved Queensland and Australian wicketkeeper Wally Grout was in fact ATW Grout (Arthur Theodore Wallace). One of his predecessors was WAS Oldfield (William Albert Stanley), known, of course, as Bert.

Once hooked on the history of cricket I continued to find exotically named players. The presence of any honorific was also noteworthy. I liked a good Lord (Harris, Hawke or Tennyson), and an Honourable - as in IFW Bligh (the Honourable Ivo Francis Walter), 8th Earl of Danley. There were Doctors, as in the most famous, Dr WG Grace (William Gilbert) and Dr HJH "Tup" Scott (Henry James Herbert), who captained Australia in 1886 but turned to medicine after eight Tests. There was even a Reverend - as in DS Sheppard (David Stuart), who played 22 Tests for England, and later became Bishop of Liverpool - and was given the title of Baron.

SFAF Bacchus (Sheik Faoud Ahamul Fasiel), undoubtedly the only four-initialled batsman to be dismissed hit-wicket for 250 in Kanpur, went on to captain the United States cricket team

I liked the Nawab of Pataudi. Finding a senior and junior was a bonus. Nawab of Pataudi Sr played Tests for both England and India. His son captained India in 40 of the 46 he played in the '60s and early '70s. I stumbled across Yuvraj of Patiala also known as Sir Yadvinder Singh Mahendra Bahadur, a right-handed batsman who played one Test for India in 1934.

There have been players with multiple initials from the outset. In the very first Test between Australia and England, at the MCG in 1877, Australian opening batsman NFD Thomson (Nathaniel Frampton Davis) did not offer much support to the sparingly named C Bannerman (Charles), making just 1, but he is famous for being the first batsman dismissed in Test cricket. England's HRJ Charlwood (Henry Rupert James) was more successful in that match, compiling 36 batting at first wicket down.

While impressed by three initials, I soon uncovered cricketers with four! And one I had known only as "Stork". HSTL Hendry (Hunter Scott Thomas Laurie) was a fine batting allrounder for Australia in the 1920s, so nicknamed because he was 6 feet 2 inches tall. England have had a couple of four-initialled players as well. VPFA Royle (Vernon Peter Fanshawe Archer) toured Australia in 1878-79. He played in the only Test and was bowled by FR "The Demon" Spofforth (Frederick Robert) for 3 in the first innings and then caught by him for 18 in the second. It was his only Test. Later ordained as a minister, he became Rev VPFA Royle, which would look good in the scorebook of any parish side. There was also a famous English captain with four initials. JWHT Douglas (John William Henry Tyler) played 23 Tests between 1911 and 1925, and was skipper in 18 of them. From an amateur boxing family, Douglas won the middleweight title at the London Olympics in 1908, (some say, unkindly, because his father was the referee) defeating legendary Australian sportsman RL "Snowy" Baker (Reginald Leslie). This didn't serve JWHT well. Like many an English captain he was not too popular among Australians - who named him Johnny Won't Hit Today. JWHT's younger brother was named more conventionally. CH Douglas (Cecil Herbert) played 21 games for Essex but was better known as "Pickles" Douglas in boxing circles.

LRPL Taylor (Luteru Ross Poutoa Lote) led New Zealand in 14 Tests. He is of Samoan heritage and has been called both Ross and Luteru at different times in his cricketing life. Early in his career he would have played first-class cricket against allrounder CZ Harris (Chris Zinzan). CZ's father PGZ Harris (Parke Gerald Zinzan) was known as Zin and played in nine Tests as a middle-order batsman. There was also ZV Brooke (Zinzan Valentine), who played 58 rugby Tests for the All Blacks. Zinzan seems to be a uniquely Kiwi name - probably modified from Italian or Albanian, as some online sources have it.

South Africa has had at least one four-initialled player. NHCD Theunissen (Nicolaas Hendrik Christiaan de Jong) was picked for his only Test after an excellent performance for Western Province against the visiting Englishmen during the southern summer of 1888-89. The Proteas' most famous three-initialled cricketer - HGO Owen-Smith (Harold Geoffrey Owen) - enjoyed the added benefits of a nickname: "Tuppy". He won a Rhodes Scholarship and studied medicine at Oxford, where he was a very good cricketer and an outstanding rugby player. Although his studies and his professional life created some interruptions, such was his athleticism that he played five Tests for South Africa and won a reputation as one of the finest fieldsmen cricket has ever seen. He later became Dr. HGO "Tuppy" Owen-Smith.

SCG MacGill (Stuart Charles Glyndwr) is, perhaps, the most appropriately initialled cricketer ever, given the success he had at the Sydney Cricket Ground

Across the border, colonial Zimbabwe is reflected in ADR Campbell (Alistair Douglas Ross) who played 60 Tests, and the new Zimbabwe in TMK Mawoyo (Tinotenda Mbiri Kanayi) who has played nine.

Pakistani names generally don't suit initials and tend not to appear that way in the scorebook. No self-respecting scorer would fill in I Khan. He is Imran Khan, from whichever era. Some players go into the scorebook as a single name. Alimuddin played 25 Tests. His brothers Salimuddin and Azimuddin were also first-class cricketers. 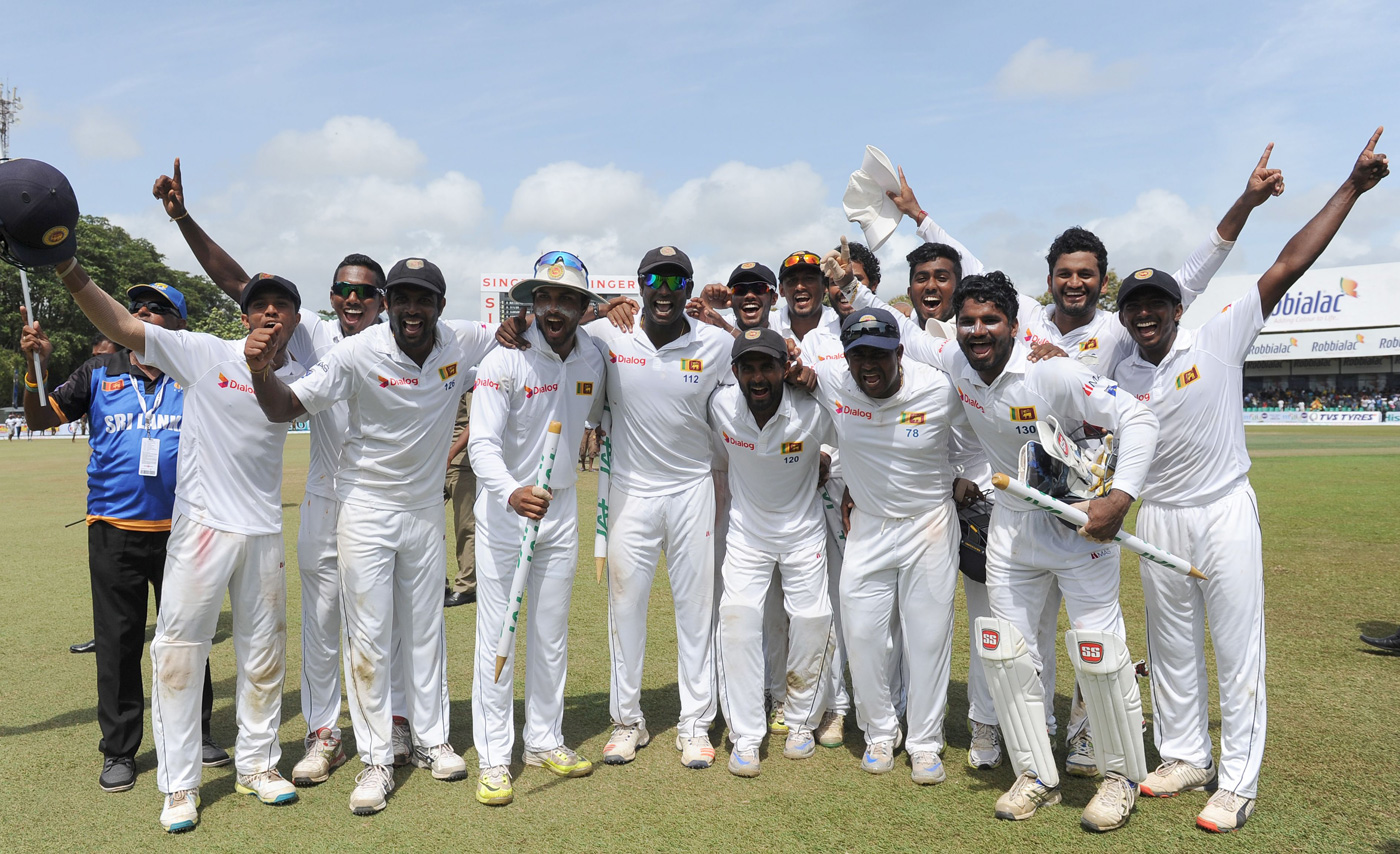 Alphabet soup: Sri Lanka has often had players in their XIs with four or five initials. Two fifers here are: PADLR Sandakan (first from right) and HMRKB Herath (third from right) © AFP

The Indian naming convention sometimes includes one's ancestral village. Like the first V in VVS Laxman, which stands for Vangipurapu, or the M in ML Jaisimha, a reference to Motganhalli. Many fans referred to them as VVS and MLJ, turning the initials into nicknames. The same wasn't true for EAS Prasanna (Erapalli Anantharao Srinivas), though, who was known fondly as "Pras", and BS Chandrasekhar (Bhagwath Subramanya), who was called "Chandra". GAHM Parkar (Ghulam Ahmed Hasan Mohammed) played fewer Tests than he had initials, playing just one match in 1982.

When the Sri Lankans joined the fray my appreciation went to a new level. Four initials is nothing special for them. Five is getting up there. Not only did I enjoy Chaminda Vaas' left-arm inswingers I loved his name: WPUJC Vaas (Warnakulasuriya Patabendige Ushantha Joseph Chaminda). Six takes the prize. UWMBCA Welegedara (Uda Walawwe Mahim Bandaralage Chanaka Asanga) has played 21 Tests as a left-arm quick. It's a pity ARRAPWRRKB Amunugama (Amunugama Rajapakse Rajakaruna Abeykoon Panditha Wasalamudiyanse Ralahamilage Rajitha Krishantha Bandara Amunugama) was unable to persuade the national selectors to pick him despite playing 102 first-class matches.

With so much cricket telecast these days, I often notice the multi-initialled cricketer. Recently I saw SCG MacGill (Stuart Charles Glyndwr) as an analyst on TV. He is, perhaps, the most appropriately initialled cricketer ever, given the success he had at the Sydney Cricket Ground. I think he was commenting on SPD Smith's (Steven Peter Devereux) team in Sri Lanka. The visiting Australians could not handle the guile of HMRKB Herath (Herath Mudiyanselage Rangana Keerthi Bandara).

Pakistani names generally don't suit initials and tend not to appear that way in the scorebook. No self-respecting scorer would fill in I Khan. He is Imran Khan, from whichever era

When I played lower-grades cricket for the University of Queensland, we would sometimes use the full initials, as we did with the Benson Street CC, a social side that hasn't had the recognition it deserves. PJ Keightley (Paul Joseph), RJ Tobiano (Richard John), PC Martin (Peter Colin), RJ Goldsworthy (Richard John), JRA Murphy (Justin Robert Anthony) and IS Lamb (Ian Stuart) will be delighted to be mentioned in the same article as IVA Richards and IM Chappell. But my favourite is the Australian cricket writer whose name is entered in the South Yarra CC scorebook - somewhere in the middle order - as GCJD Haigh (Gideon Clifford Jeffrey Davidson).

I am the father of young children - TC Harms (Theodore Christopher), AM Harms (Anna Matilda), EG Harms (Evie Grace) - who are just starting to appreciate cricket. The tennis ball in a stocking hangs off a lower branch of the birch tree in the backyard. I look forward to them discovering the joy of the scorecard and the beauty of the time-honoured practice of including full initials.

It is a tradition that should be preserved.

John Harms is a contributing editor at footyalmanac.com A Barber, a Cook, an Engineer and other cricketers whose names are also professions 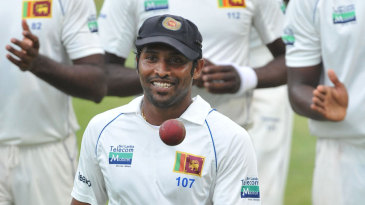 How do you spell that?

Players who troubled the scorers with their long names 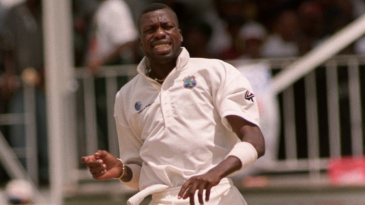 Cricketers who were named after famous predecessors