Immigration and its contents: Netherland, a novel that was able to assimilate an alien sport in an American setting

The author Joseph O'Neill is an appealing sort of cricketer. He played for the Dutch Under-19 side and penned an appreciation of CLR James for Americans. He speaks feelingly for his Staten Island Cricket Club in New York City. Interviews have him weary, having stayed up all night to watch his native Ireland in a World Cup match, or gently educating American journalists on the game's history in their country in his thoughtful, posh Cambridge-educated manner.

O'Neill's novel Netherland is distinguished among cricket fiction in being wildly successful as far as book sales (100,000-plus) and film rights acquisition and broadsheet and literary feting go. These triumphs stem not from England or the Commonwealth but the United States of America, of which country the author is a citizen. The novel, fantastically, even features a commendation from Barack Obama on the cover.

North America holds curious sway over the cricketing imagination. From the Sahara Cup of two decades ago to the jolly Cricket All-Stars Series to international cricket's latest outing in Florida, there is a will to foster cricket on the continent. The Caribbean Premier League shows bold intent to establish franchises in New York and Toronto, ESPNcricinfo maintains an ardent American correspondent, and the United States of America Cricket Association's administrative ineptitude fails to dissuade the hopeful.

Although an important plot device, the game is rarely mentioned to any detail likely to confound even the most casual acquaintance

Commencing this series on cricket fiction, careful thought was given to representing each nook of the cover-driving globe. True to O'Neill's experience, Netherland is a quota filler for Associate Nations. It's the tale of a Dutchman playing New York club cricket. The protagonist, Hans, comes to the game not through maidans, nor Anglo-Saxon swards, nor sun-drenched Australian wickets, but as a well-to-do youth in The Hague. Now adult, Hans, in his recently arrived home of New York City, is left separated from his wife, who, ostensibly anxious following the September 11 attacks, returns to Europe with their child. Inert with free time, Hans joins a local cricket club and immerses himself in the pastime of his youth.

As depicted by the author, New York club cricket is a motley affair. It is an immigrant's game played by West Indians and South Asians. On pint-sized fields with matting wickets, rude, effective muscular batsmanship prevails. Overgrown outfields impede the course of any ball struck along the ground and necessitate tonking. Wonderfully, perhaps, or with entitlement, our Dutch hero refuses to embrace the New World and maintains a classical technique that is fruitless in pursuit of runs.

Hans' friend Chuck provides the novel's most convivial element. An occasional umpire, he first appears dressing down a drunk, gun-wielding spectator dissatisfied with a decision. An enthusiastic new American from Trinidad, he's a bird enthusiast and avows the motto "Think fantastic". Wanting to capitalise on the millions-strong Caribbean and South Asian diaspora in New Jersey and New York, Chuck conspires to build a cricket arena in Brooklyn and bring the American cricket dream to reality. He and Hans cut and water grass together and roll turf at his gallantly named Bald Eagle Field. Running a street gambling circuit and using Hans (unbeknownst to him) as a pick-up driver, Chuck ends up murdered and dumped in a canal.

The eccentric and macabre are, indeed, more the novel's preoccupation than cricket. Although an important plot device, the game is rarely mentioned to any detail likely to confound even the most casual acquaintance. Not overstaying its welcome grants cricket the ability to be quaint and somewhat exotic for American readers, with one well-meaning New York Times piece warming to the subject and charmingly describing O'Neill as a "decent off-speed bowler". The elusive appearance of the sport is not necessarily to be lamented; writing for ESPNcricinfo, Samir Chopra notes of Netherland: "I think if cricket had intruded any more into it, I would have found it a considerably less interesting book.'" The book is concerned, rather, with relationships as they become complicated by work and children. There is also a deal of stylised mooching about in a world distant from cricket, with the bent glamour of the Chelsea Hotel, and a narrator who casually mentions having some three million dollars in savings. It sketches characters that populate New York, such as an ominous mime artist making love to his marionette, ladies from a home for the blind who patronise the local diner, or a Turkish chap who wears angel wings. Whether it's Hans' professional activities as an equities analyst, getting sozzled in an Arizona casino with hedge-fund managers, his familial commitments, with wrenching trips to London against the bustle of New York, or his mundane undertakings, such as all the hours spent converting his driving licence to be valid for the States, the narrative is captivating. Netherland is often melancholic, occasionally grim, but such is its spirit that it nearly always proves agreeable reading.

This is not the most sporting of cricket novels but the world of the game it reveals is fascinating. Whatever the fate of cricket in America, Netherland will remain testament to the fringe life the game currently enjoys and the improbable literary triumph of an American cricket book.

This degenerate version of the sport - bush cricket, as Chuck more than once dismissed it - inflicts an injury that is aesthetic as much as anything: the American adaptation is devoid of the beauty of cricket played on a lawn of appropriate dimensions, where the white-clad ring of infielders, swanning figures on the vast oval, again and again converge in unison towards the batsman and again and again scatter back to their starting points, a repetition of pulmonary rhythm, as if the field breathed through it luminous visitors.

This is not to say that New York cricket is without charm. One summer afternoon years ago, I sat in a taxi with Rachel in the Bronx.

She was pointing down to our right. Scores of cricketers swarmed on a tract of open parkland. Seven or eight matches, eleven-a-side, were under way in a space that was strictly large enough for only three or four matches, so that the various playing areas, demarcated by red cones and footpaths and garbage barrels and foam cups, confusingly overlapped. Men in white from one game mingled with men in white from another, and a profusion of bowlers simultaneously whirled their arms in that windmill action of cricket bowlers, and multiple batsmen swung flat willow cudgels at once, and cricket balls chased by milky sprinters flew in every direction. Onlookers surrounded the grounds. Some sat beneath the trees that lined the park at Broadway; others, in the distance, where trees grew tall and dense at the edge of the common, gathered by picnic tables. Children milled, as it's said. From our elevated vantage point the scene - Van Cortlandt Park on a Sunday - appeared as a cheerful pell-mell, and as we drove by Rachel said, 'It looks like a Brueghel,' and I smiled at her because she was exactly right. 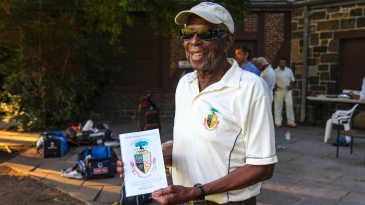 Cricket in the city is safe in the hands of the enigmatic Clarence Modeste, keeper of the oldest continuously run cricket club in the USA Houston, we have a cricket league

Over the past four decades, expats from India and elsewhere have built up a vibrant cricket scene in the Texan city