Bad behaviour on the field March was a difficult month for cricket, with players from Colombo to Cape Town behaving in unseemly manners and forcing us to wonder what we want the game to be. In this photo feature, we look at players who have routinely lost their cool on the field and got into arguments with opponents and umpires.

When James Anderson is not taking tons of wickets, he is shoulder-barging opponents, arguing with umpires, getting into an altercation with Ravindra Jadeja, and calling out Australia for their bullying. In this photo, the object of his aggression is Western Australia batsman Wes Robinson, during a tour game in Perth in 2010. 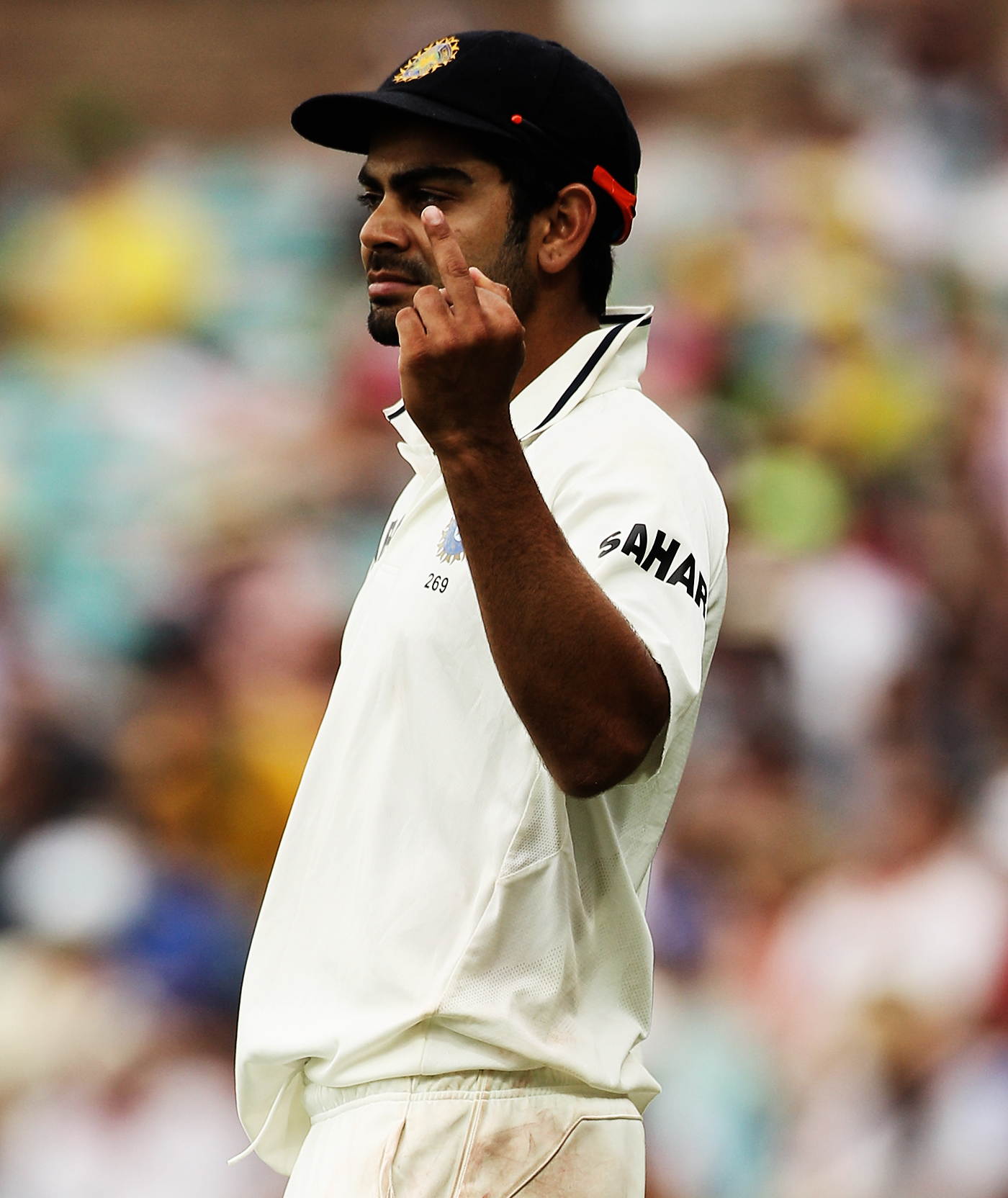 Virat Kohli is pugnacious in everything he does on the field - celebrating hundreds with expletives, getting into the faces of chatty opponents, or giving the finger to raucous crowds, as he does here in Sydney, 2012. Kohli once famously had an on-field altercation with fellow hothead Gautam Gambhir when both were captaining their respective franchises in the IPL.

As for Gambhir, in the 2008 Delhi Test, he and Simon Katich (remembered, among other things, for grabbing Michael Clarke by the throat in a dressing room once) had to be separated by umpire Billy Bowden after they got into an argument. While the two were not charged, Gambhir and Shane Watson were disciplined for an elbowing incident in the same Test, though Gambhir insisted the elbowing had not been not deliberate. "It just happened, Gambhir said. "I didn't need to get into this argument with Shane Watson because he had no option of getting me out. There wasn't a need for me to stick my elbow out." 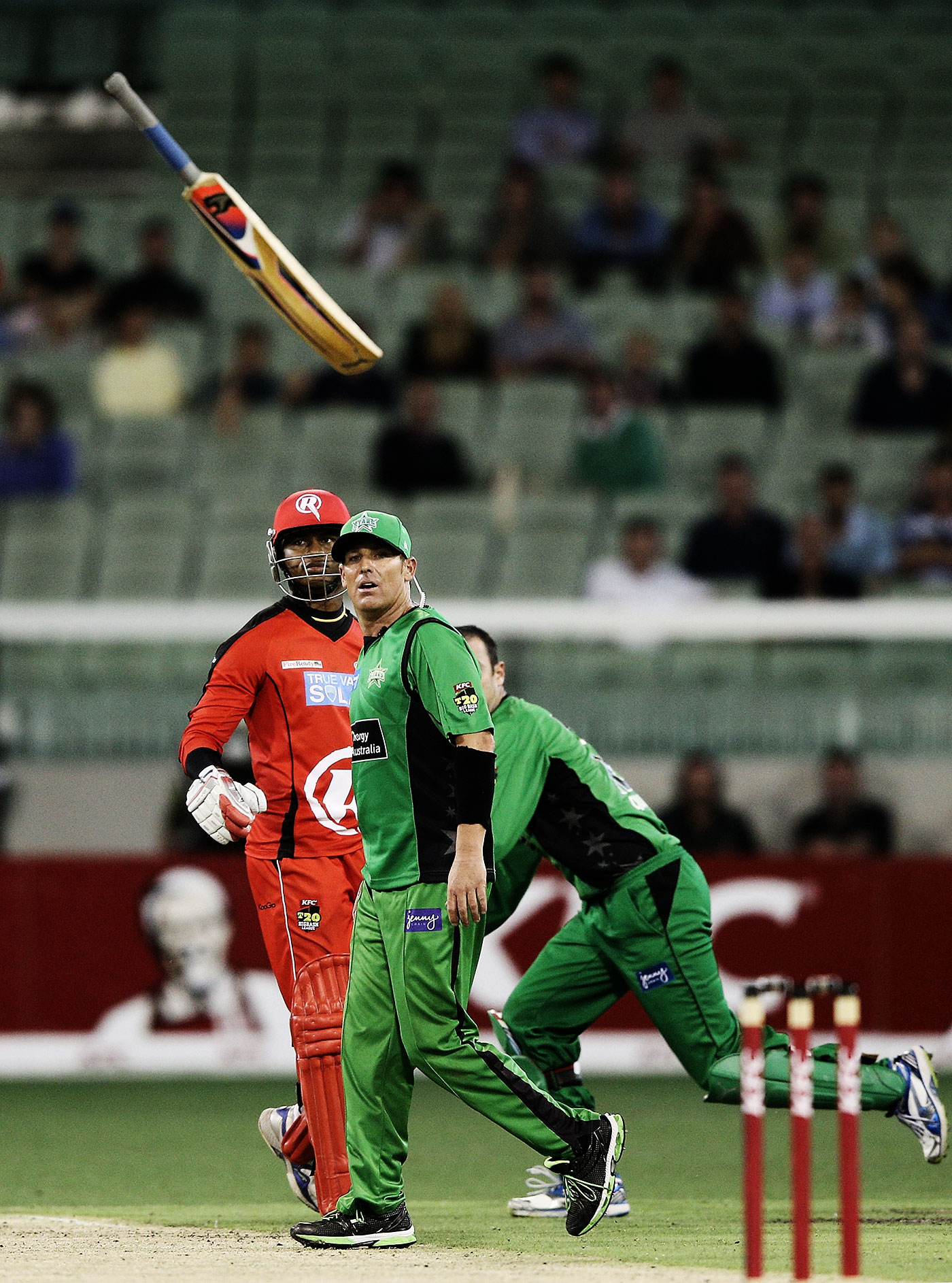 An action that could in no way be construed as anything but deliberate was Marlon Samuels' bat-throwing after being riled up by Shane Warne at the Big Bash in 2012. Warne was mouthing off at Samuels and things reached boiling point when he fielded a shot from Samuels and threw the ball straight back at him. An angry Samuels chucked his bat into the air in disgust - not aiming for Warne, but in his direction. 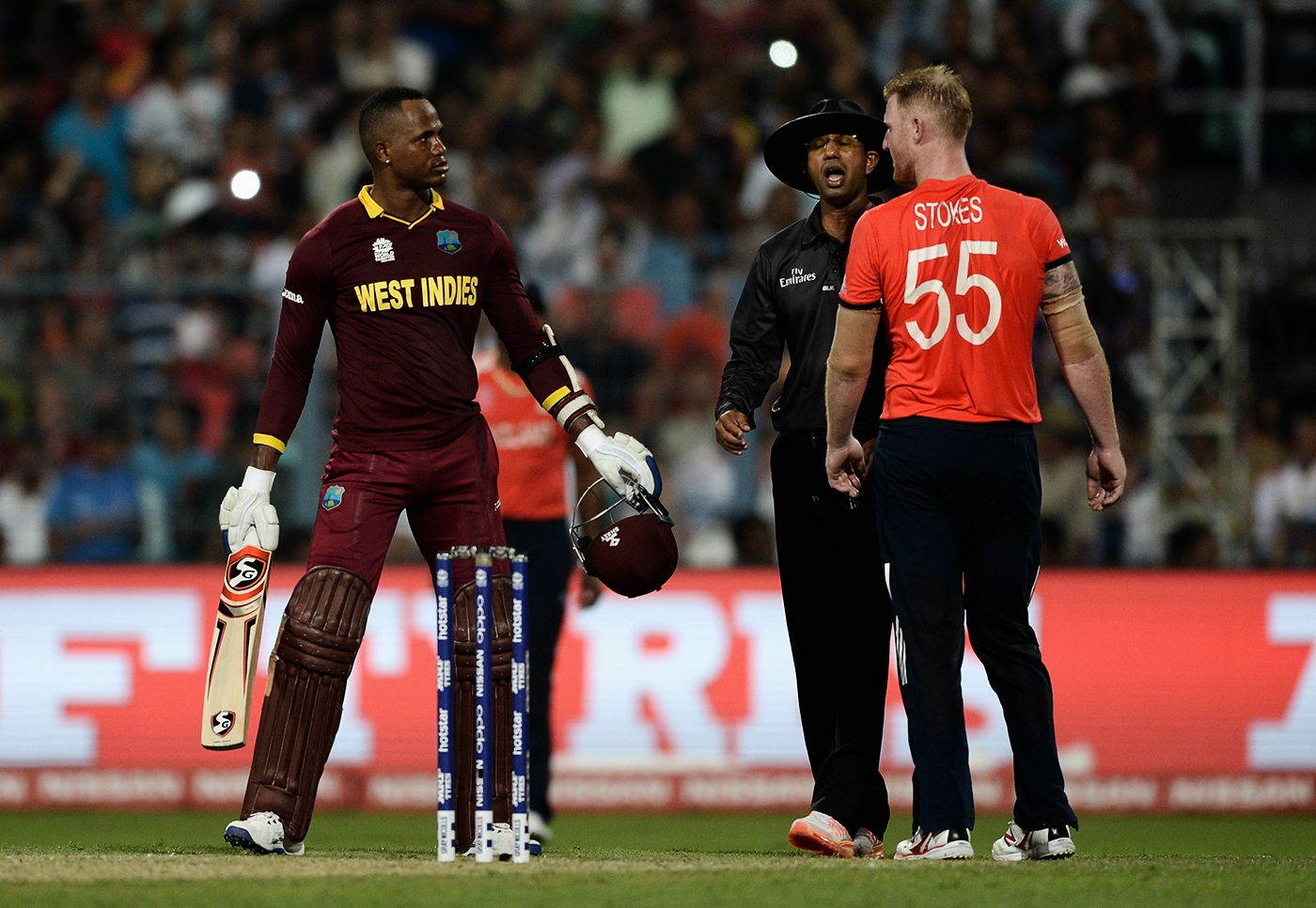 Recently, Samuels has found a willing new enemy in Ben Stokes, another character who enjoys a good pow-wow. Their made-for-TV relationship started when Samuels "saluted" Stokes after dismissing him in the Grenada Test in 2015. The two then exchanged words during the 2016 World T20 final when Samuels was waiting for a third-umpire call on his dismissal. After West Indies' thrilling last-over win, Samuels said of Stokes, who had bowled the memorable final over: "Stokes is a nervous laddie... he doesn't learn." Stokes responded in his book:

Marlon Samuels lacks respect. You get that if you have spent any time with him on a cricket field. Marlon's conduct after West Indies' victory over us in this year's World Twenty20 final showed a total disrespect for the game…

… It didn't require him to give me a character assassination - bizarrely claiming I am some sort of 'nervous laddie' - to help me form the opinion that I do not like him one bit. I believe in the saying 'respect the game'. I don't think he respects the game…

… I was at mid-off and, in my enthusiasm, found myself creeping in from my position and I noticed that Samuels, at the non-striker's end, was walking around like the big easy. I couldn't resist. 'You've got a bit of a swagger on here, Marlon, considering you're 14 for three,' I said. 'Shut the f*** up, you little bitch,' came the reply. Boorish behaviour isn't limited to modern cricket. WG Grace, the sport's first superstar, wasn't shy of letting umpires know that the crowd had come to watch him bat. In his book WG Grace: A Life, Simon Rae writes of this picture above:

"W.G. Grace was unquestionably the dominant personality in Victorian cricket. Some saw him as a classic case of arrested development, a perpetual schoolboy. Certainly he could act the part, as snapshots of him irritating a decidedly unamused Lord Hawke and the Kent captain, J.R. Mason, at the Hastings Festival in 1901, graphically demonstrate." One of the most famous altercations in cricket occurred in Perth in 1981, when Dennis Lillee and Javed Miandad did their best to impersonate immature schoolboys. Miandad took a single and collided with Lillee. As Miandad turned away, Lillee kicked him. Miandad reared up, holding the bat over his head in a threatening fashion, and the two had to be separated by umpire Tony Crafter. 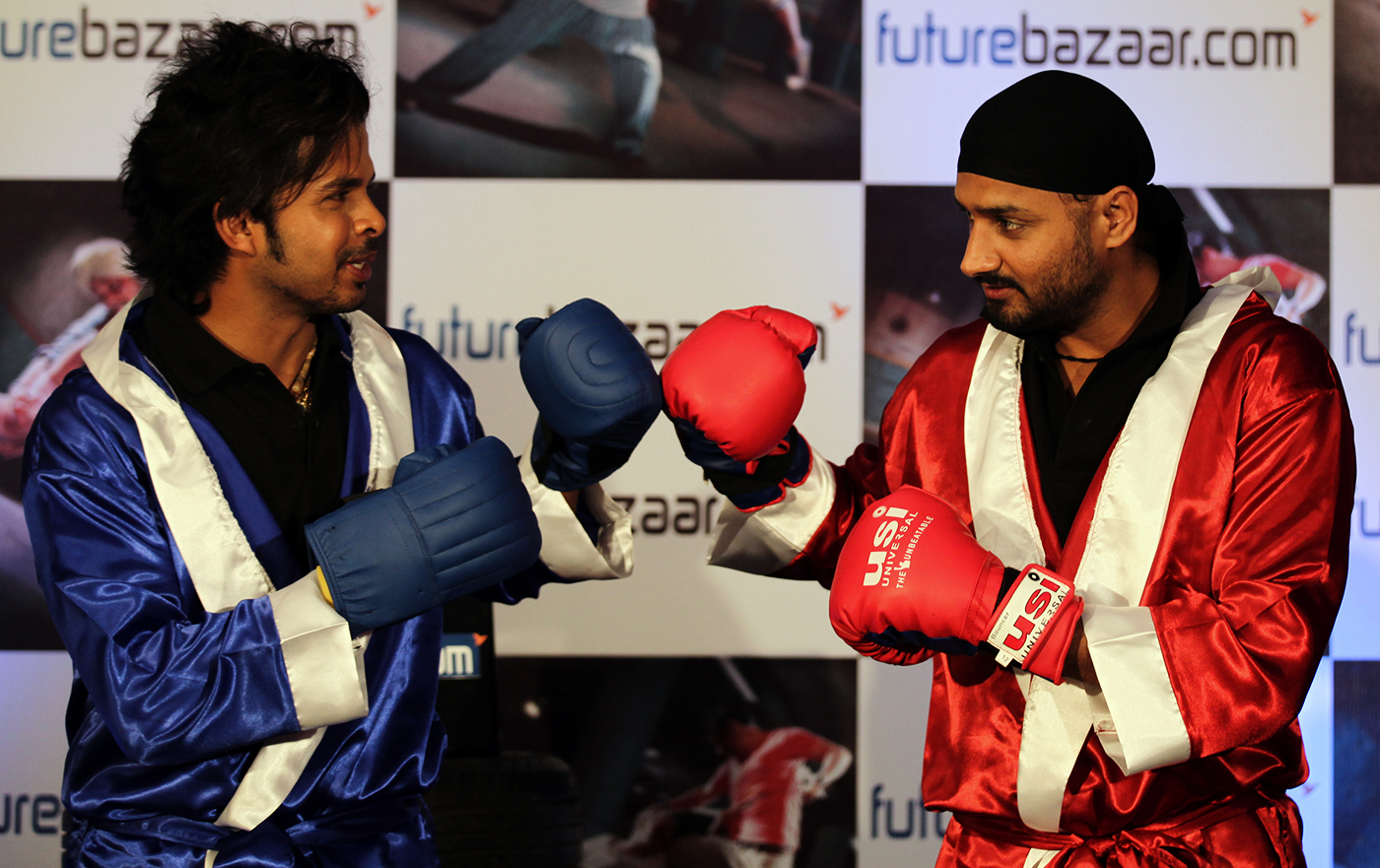 Sometimes you can use your notoriety to good advantage: Sreesanth and Harbhajan Singh don boxing gloves for a promotional event two years after Harbhajan slapped Sreesanth at the end an IPL match in 2008. "The referee studied video tapes of the incident and found the assault by Harbhajan was totally unprovoked. The footage exactly showed that Harbhajan went down the line, wishing all the players, shaking hands with a few players," said Lalit Modi, then commissioner of the IPL. "Sreesanth was the third player that he met. Instead of shaking his hand he actually slapped him and continued down the line, shaking hands with the other players." Harbhajan was banned for the rest of the season. Although the two players publicly made up soon after the incident, in 2013, Sreesanth claimed the real video of the incident had been withheld, and that while Harbhajan hadn't slapped him, he was a "backstabbing person". Australians were never fans of Harbhajan, needling him and getting plenty in return. A few months before ugliness marred the 2008 Sydney Test, he had clashes with them during an ODI series in India. After being dismissed by Michael Clarke in Kochi, Harbhajan waited mid-pitch and pointed his bat. "I was responding to a lot of vulgar words that were said to me," he later told the Sydney Morning Herald. "I don't have any problem with chitchat on the field, so long as it is about the game. But when it is very personal and vulgar, that is not on. They think you cannot fight back and they do not like it when you do." 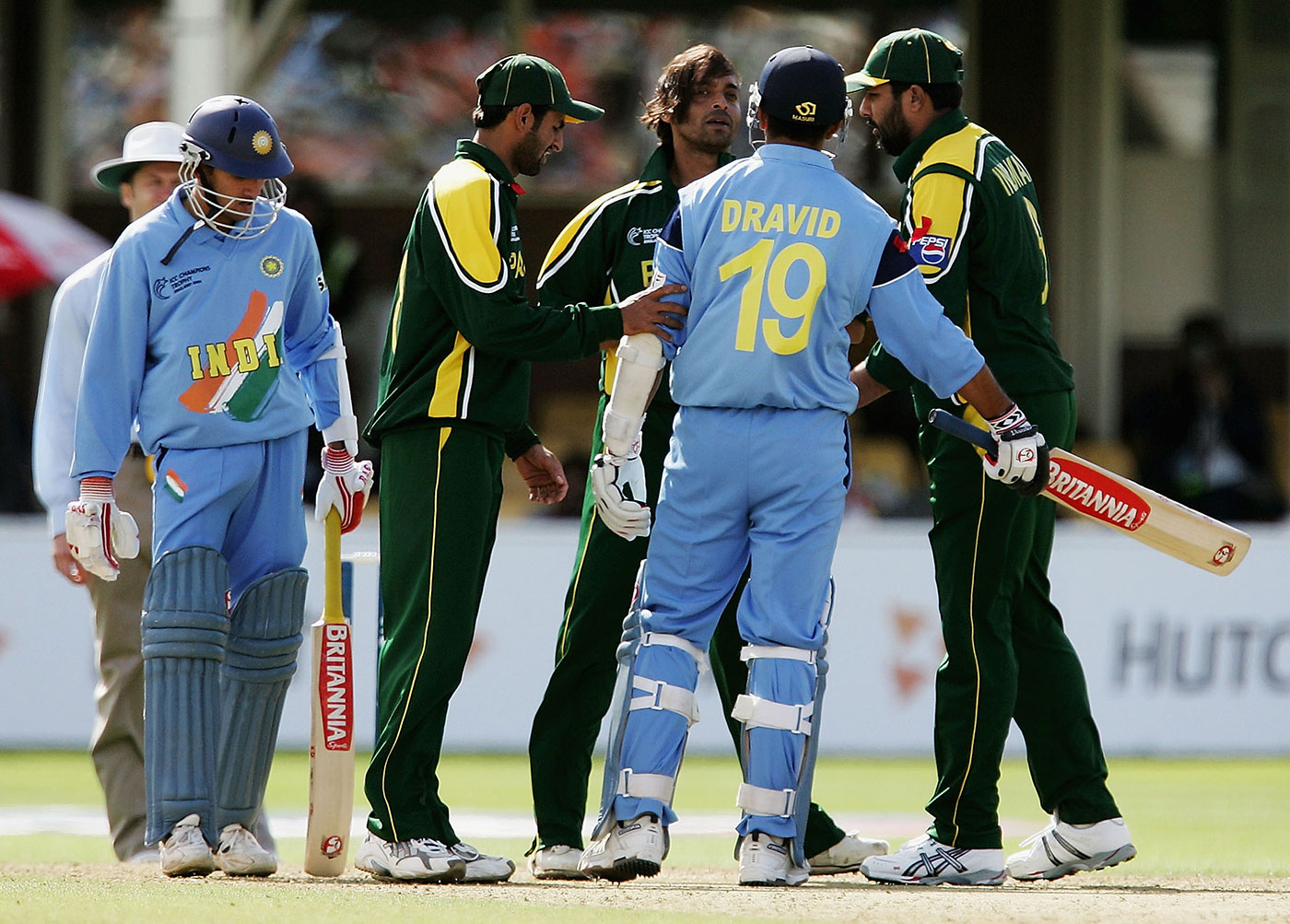 A rare sight: Rahul Dravid eyeballing Shoaib Akhtar, at the 2004 Champions Trophy match at Edgbaston, after Akhtar gestured angrily and glared at him for bumping into him while taking a run. The two had to be separated by Pakistan captain Inzamam-ul-Haq, but even the brief encounter delighted fans of both sides in a marquee encounter that Pakistan won by three wickets with four balls to spare. 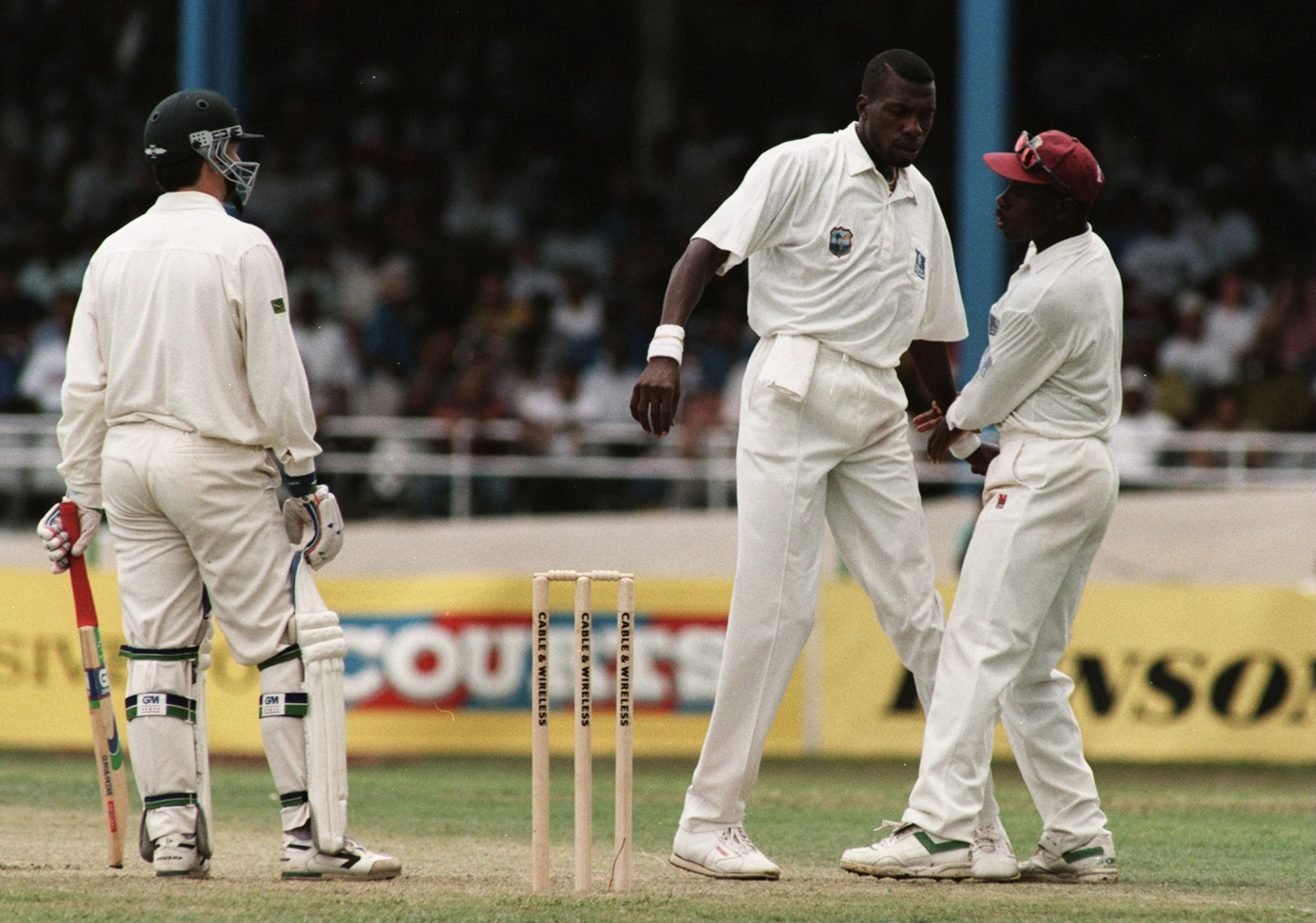 To Steve Waugh, mental disintegration was a crucial game tactic, and an early example of such use came against Curtly Ambrose at Queen's Park Oval in 1995. In his autobiography, Curtly Ambrose - Time to Talk, Ambrose recalls the incident in which during a break his team-mate Kenny Benjamin told him that Waugh had earlier sworn at him. Ambrose felt it was disrespectful and asked Waugh if he had said anything when the teams returned to the field. He writes:

"That's when he snapped back, 'I can say what I want to say', which was as good as admitting he'd sworn at me. That was when I ripped into him and let him have it: 'Man, don't you effing swear at me again.' And I don't swear a lot so for me to use expletives it was clear that my anger was at boiling point.

"I lost it. If he had said nothing to what I had asked him, or even told me he didn't swear, it would have ended right there, but when he came back at me again with all guns blazing, there was no holding back.

"I got seriously heated. I told him, 'Man, I will knock you out - here and now. I don't care if I have no career left'. That was when Richie intervened and told me to forget about it, and it was a good job he did because my ability to restrain myself was gone." Some of the resentment that has been building up against the current Australian team owes to David Warner's confrontational manner on the field. Here, Tamim Iqbal tries to break up an argument between Warner and Sabbir Rahman (second from left) during the Mirpur Test last year. 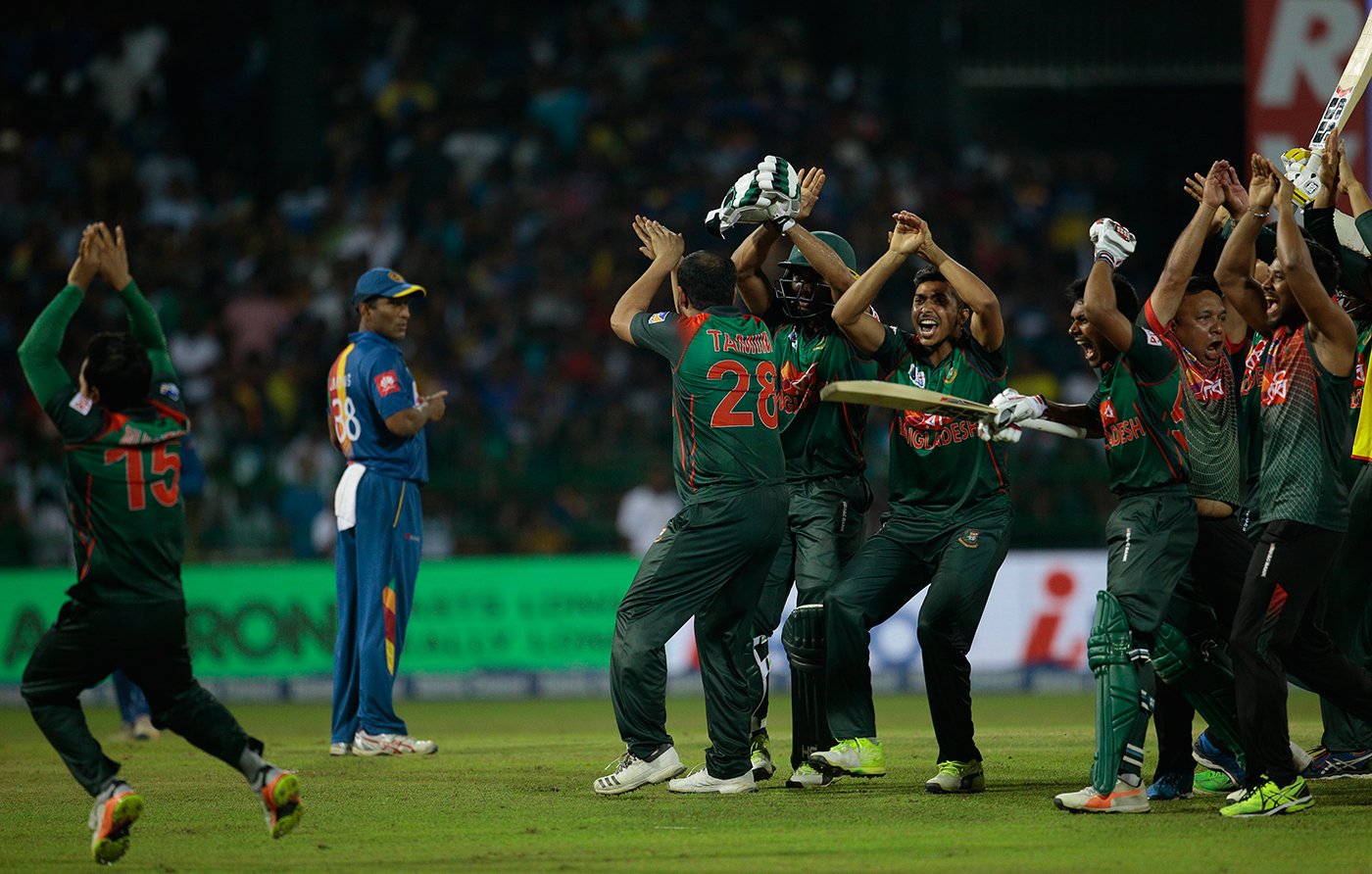 Bangladesh aggravated Sri Lankan fans with their excessive celebrations following victory over the home side in a tri-series match in Colombo earlier this year, dancing while making snake-like gestures (Sri Lankan players had done the same previously), and then breaking a glass door when the festivities moved to the dressing room. The home fans made their disapproval clear by vocally supporting India in the final. 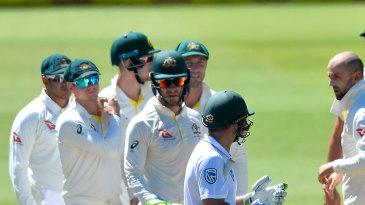 Officials need to be proactive about bad behaviour, not reactive

Stiff penalties for all the culprits involved might change the outlook 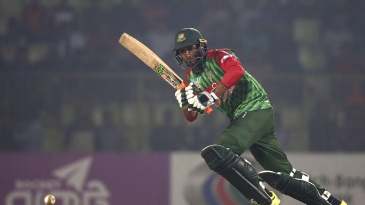 For a few moments, play came to a halt with players from both sides having to be restrained from each other. Then Mahmudullah struck a six to seal Bangladesh's place in the final 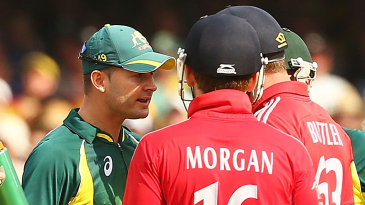 The problem with the Australian Line of Control

On-field spats seem to involve the Australian team more than the others. Are they even going to admit it's a problem?