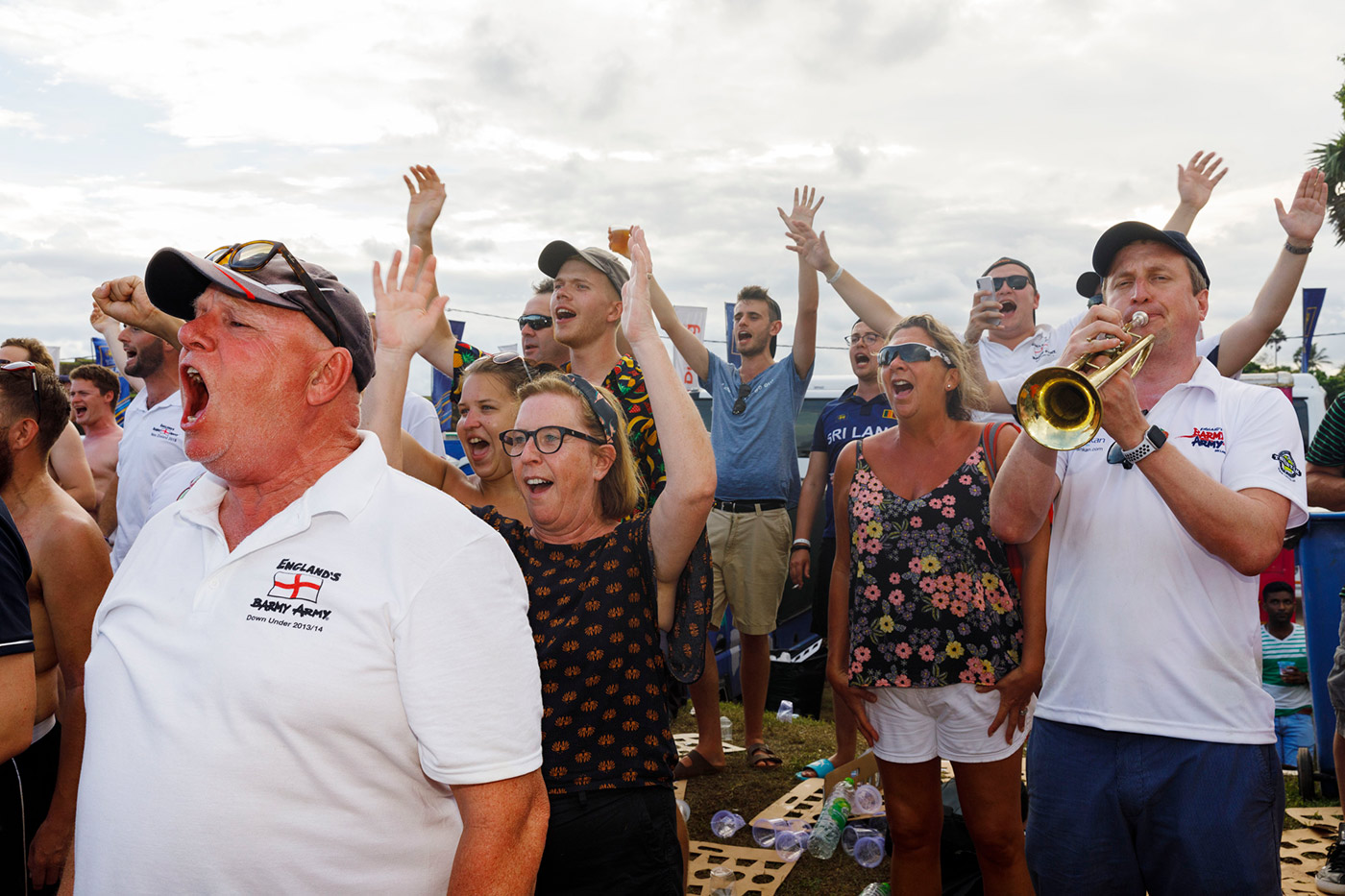 Billy the Trumpeter kicks proceedings off, leading the troops in a rendition of "Jerusalem"

This article was created for ESPN.com

This summer I had the pleasure of finally getting to shoot photos at Lord's, the "home of cricket", in north London. It was well worth the wait to be able to capture this bastion of sporting tradition and establishment life on film. The members all wear jackets and ties and queue outside from the early hours to get the best seats.

I had a question for their press office: which cricket ground in Asia would be the most interesting to watch a Test match in? The unanimous answer came back: Galle in Sri Lanka. 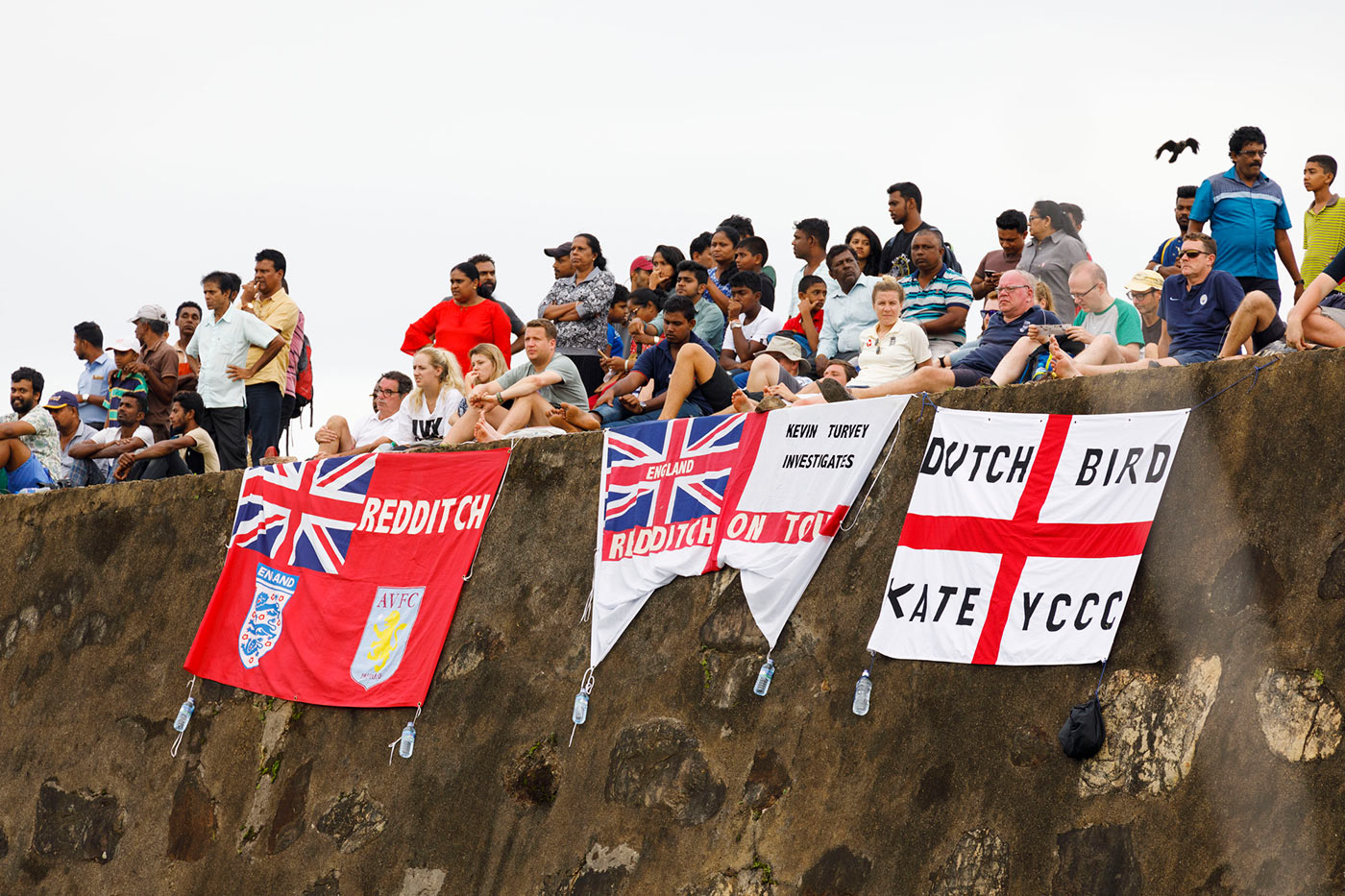 So here I am, six months later, about to drive into Galle and witness the first of three Test matches between England and Sri Lanka. One motivation for this visit would be to witness the now legendary Barmy Army in action. Yet more football evangelising, this time with dollops of shirtlessness © Martin Parr

These are the loyal followers of the English cricket team who travel to support the team when they tour. Rather touchingly, the name was coined by Australian cricket fans. In the mid-'90s the English fans would travel all the way down under to witness, with depressing regularity, England lose another match and series. The assumption was that these fans must be mad; hence the name. Not a neck you want to be stationed behind © Martin Parr

The Barmy Army has grown into a huge and successful travel company. Members are identified by their distinctive white T-shirts. The name has also come to become a generic identifier for travelling English cricket fans.

As I walk into the ground, I can see many hundreds of people in position in Galle Fort, ready to watch the match. The fort's ramparts, high above the cricket ground afford the best view possible of a major sporting event that can be had for free. The fans spread themselves along the high walls, often in quite precarious positions. Actually entering the ground doesn't cost much either: around US$2 a day. In the ground itself, most of the crowd are English: although cricket is perhaps the most popular sport here in Sri Lanka, it seems there is not as much enthusiasm for a long drawn out, five-day Test match. The sudden-death, one-day matches most appeal to Sri Lankans. The match is about to start and I need to locate "Billy the Trumpet", who usually leads the traditional rendition of "Jerusalem" in the first over (an over is a unit of six balls). Sure enough, his virtuoso playing starts up and the singing echoes round the stadium. Everyone knows the words; it is like the second national anthem, after "God Save the Queen". Billy Cooper, a professional trumpet player, was kidnapped by the Barmy Army about 20 years ago and has been their musical mascot ever since. Now we settle down to five days of cricket, for this is a very long game indeed. Another tradition that gets going before the match begins is the hanging out of assorted English flags, some emblazoned with the names of football clubs. Small sums of cash are offered to the army of groundsmen to hang these in prominent positions. They are thus picked up by the TV cameras and broadcast to the world. You can also see these flags hanging from the fort. When you're barmy and you know it, suit up like Charlie Chaplin in the heat of Galle © Martin Parr

A day's cricket consists of three sessions. Here in Sri Lanka, the morning session is 10am-12pm. At Lord's you will see hampers, champagne and a delicious spread laid out at lunch. Not in Galle, for here you grab a hot dog, some pot noodles, and of course, another beer. Then after 40 minutes, back to the cricket, before they break for tea at 2.40pm. Who else but the English would do such a thing? Well, of course, all the ex-colonies, which is basically where Test cricket is played. After the British colonies gained independence, cricket was one of the legacies that survived, along with the ability to make a good cup of tea. Believe it, this view is for free © Martin Parr

During the last session, between 3 and 5pm, the Barmy Army come into their own, fuelled by generous quantities of beer. Billy leads assorted ditties, some of which reference English players such as the allrounder Moeen Ali with a traditional song: "One man went to Mo. Went to Moeen Ali." Other songs reference the Barmy Army itself: "We are everywhere and we are noisy. We are the Barmy Army." All the excitement gets to be a bit too much for a fan (or maybe it was all the beer?) © Martin Parr

As well as the UK base, the Barmy Army has clubs and outposts in cities such as Dubai and Sydney, and representatives from here have shown up for the match. Fancy dress is often worn and the fans' behaviour gets bolder throughout the day as more beer is consumed. Often people forget they are here to watch cricket, but I guess that could be said of many sporting fixtures, especially where drinking is involved. It is now day four and the match is nudging towards the close. England have to bowl Sri Lanka out to win and this possibility is tantalisingly close. Rangana Herath, a very respected Sri Lankan spin bowler, is playing his last match, and a small but noisy gathering of Sri Lankan schoolkids have been handed Herath posters and face masks. This helps liven up the local support, and it feels more like a proper match. Herath is run out and applause from both camps echoes around the ground. The spectators on the fort walls also join in. One more wicket and England have won the match, which has been very speedy, closing early at the end of day four. The Barmy Army leaves the ground jubilant, smiling broadly; it is the first time in nearly two years that England have won a Test match abroad. Perhaps they are not so barmy after all. In tune with the Barmy Army

Centurion: Back in May, on one of those chilly late afternoons they euphemistically call ``a balmy spring day'' in England, running in to some of the more jolly members of the Barmy Army was more accidental than incidental Test cricket in Sri Lanka may not always whet the appetite. However, the scenes are quite different when England are in town