It's the cricket summer in the UK, or as the rest of us know it, the wet season. Cricket fans in England will indignantly tell you that it does not rain every day as is popular misconception - it rains every other day. (In 2020, the UK had 170 days of rain). And not only does England get the least amount of rain among Scotland, Norther Ireland and Wales, London is one of the driest of all European cities. Tell that to the 2019 World Cup.

Or these fans at Headingley in the photo below.

A 2018 study on how climate change is impacting sports in the UK estimated that at least 175 days, or 16,000 overs, of the County Championship have been lost to rain in five of the ten years between 2008 and 2018. In international fixtures, 27% of ODIs played by England at home have seen reduced overs because of rain disruptions. A brolly is your best friend, come rain or shine © Getty Images

"You call that rain?" scoffs Sri Lanka, where they have turned pitch covering into an Olympic sport. Given that most of Sri Lanka's home schedule coincides with the island country's wettest months, the SLC employs a veritable army of ground staff that can have the entire ground - not just the pitch - covered in tarpaulin in under nine minutes. But not even Sri Lanka's superhuman stadium samurai could salvage Worcestershire's New Road after a spot of rain. The ground is located in Worcester, on the left bank of the Severn River, so a downpour is an invitation for the river to join the cricket. Or, to paraphrase PG Wodehouse's Rory Carmoyle: "In summer, the river is at the bottom of the ground, and in winter, the ground is at the bottom of the river". From October 2019 to March 2020, the BBC reports, New Road spent 62 days under water. How much of this is the ground staff's tears? © Getty Images

Cricket in the rain is certainly picturesque, for the watchers if not the players. Colin Munro is turned into an impressionist painting by a summer shower. © Getty Images

And if you insist on continuing with the game, it's best to come equipped. You'll go off for rain when umpire Percy Lister says it's time. Right now he can barely feel a drop © Getty Images

What do you do when you have no choice but to retire indoors? You could take the cricket with you. Asif Iqbal, a young James Packer (son of media magnate Kerry), and Derek Underwood get a game of stick cricket in during a rain delay at the World Series Cricket in Sydney © Getty Images

You could also use the time for some personal grooming. Brett Lee gave Andrew Symonds a mohawk while rain delayed a match between Australia and Pakistan at Chester-le-Street in 2001. It's too bad the match was abandoned, so Symonds couldn't bamboozle the opposition by sporting two different looks in the same game. But as every cricket fan knows, nothing lasts forever, not even cold summer rain, and there's always a match at the end of the rainbow. 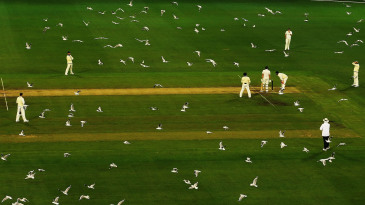