News broke this week about the retirement of a legend, some would say before it had even achieved full potential in a brief but dazzling run in the limelight. We are speaking, of course, of Colin de Grandhomme's magnificent mullet that has now been consigned to a barber's bin somewhere. When de Grandhomme decided to bring sexy back, and front, is not known but fans were first treated to his luxurious locks during New Zealand's tour of England earlier this year. It wasn't long before it was being called "arguably the greatest mullet in cricket", rivalling even those of Ian Botham and Jason Gillespie in their pomp. Alas, the mullet is no more but it has found a place for posterity in the rogue's gallery of cricket's most memorable hairstyles. Bleacher report: a hair-don't to remember a legendary series by © Getty Images

Pietersen has gone on record to say he's not the biggest fan of the hairstyle in hindsight.

Jimmy Anderson's been through the hair gamut too, sporting, at various times, frosted tips, a shaven pate, and more recently, a platinum-blond wash, but he actually had the tinted faux-hawk before Pietersen. MS Dhoni was the original trendsetter in Indian cricket, his chemically straightened hair circa 2005-06 uniting fans across borders. Lasith Malinga without his trademark do is quite the shock to the system. Would you recognise Malinga without his frosted curls? © Getty Images Colin "Funky" Miller lit up the 2001 Ashes with his DIY hair colour - a different shade every match - cycling through red, candyfloss pink, blue, green and canary yellow during the series. Earlier that year he had flummoxed Courtney Walsh at the SCG with a blue noggin, which led Michael Holding on commentary to remark, "This, I am reliably informed, is the first wicket taken by a bowler in Test cricket with blue hair." A good day to dye: Miller prepares to bamboozle the opposition during the 2001 Ashes © Getty Images He'll give you a clean sweep and a scrub down © MSL 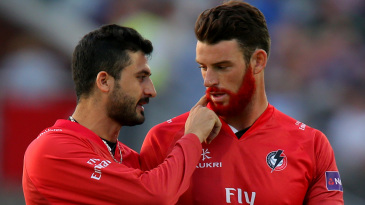