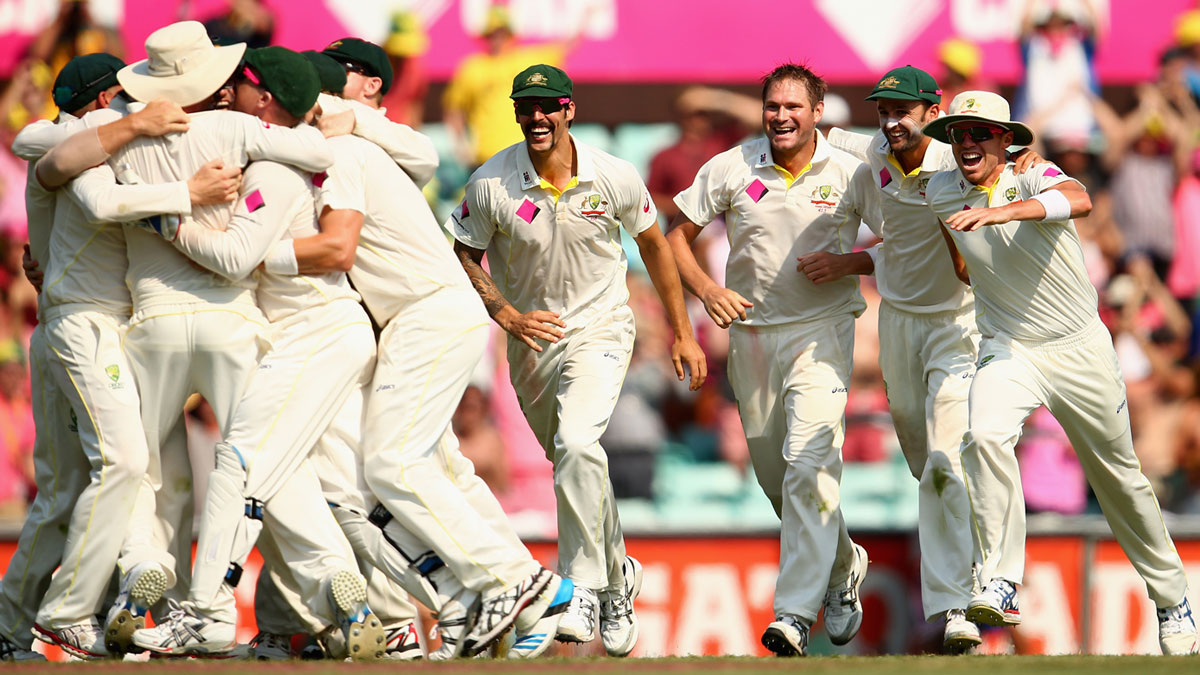 A series in which writers explore the game through a word. First up: momentum

Momentum
1. Physics. The quantity of motion of a moving body, measured as a product of its mass and velocity.
2. The impetus gained by a moving object.
2.1 The impetus and driving force gained by the development of a process or course of events.
(Oxford English Dictionary)

The lingering question over the 2013-14 Ashes series is double-barrelled. It wasn't just how Australia reversed a 0-3 loss in the space of three months. It was how they turned it into a whitewash. Why wasn't the series result in Australia 3-1, or 2-1, or even 3-0? Why did it have to be - and by the final Test match in Sydney, it absolutely had to be - 5-0?

Michael Clarke, the Australian captain, chirruped about "momentum", and the buzzword, once you thought about it, took on concrete properties. You could picture the teams as two groups struggling to push a giant boulder from opposing sides. Once such a boulder is set rolling, its motion becomes harder and harder to arrest, because it is always moving. It gathers pace. Its mass - the significance of the Ashes - multiplied by its velocity - the speed of the Australian turnaround - combined to produce something greater: its momentum. Once that boulder was in motion, no day and no session started with the teams on an equal footing. At the commencement of each pulse of play, Australia were already moving forward, and the English knew it.

Momentum is not a new phenomenon in cricket. Changing rooms are fragile, superstitious places, and once a belief takes hold it can gather the energy of a magic spell. Momentum might best be illustrated by stories of SF Barnes bowling in the Lancashire League; instead of the next one or two batsmen, whole teams were sitting in the changing room padded up. Momentum can feel like despair. When batting orders are collapsing, the silence as two batsmen sit side by side removing their equipment, while another three are hastily putting theirs on, is literally sickening. On the last night of the first Ashes Test in 1894-95, Australia needed just 64 runs to win with eight wickets in hand. Defeat, after scoring 586 in their first innings and making England follow on, would be unprecedented. But because it was such a horrible thought, it transfixed Australia's captain, Jack Blackham, who sat up all night fretting in his Coogee hotel, certain he could hear spots of rain on the tin roof. Next morning, his gloom had infected his team-mates and all eight wickets tumbled for 53. At other times, Blackham was so nervous about his team's batting that he circled grounds in a cab rather than watch them. Inevitably, a collapse resulted.

Conversely, out on the field, momentum is felt as joy. Members of the West Indian teams of the 1980s and 1990s would not wait till the end of a match to start their victory party. It was said that Curtly Ambrose knew so instinctively that he had bowled a ball in the right place that he would murmur "Hoopsy, Hoopsy, Hoopsy!" as soon as he released it, knowing that the batsman would edge it to Carl Hooper at second slip. So dominant were the 1974-75 Australians over the touring Englishmen that one day in Perth, as Keith Fletcher approached the wicket to take guard against Jeff Thomson, Doug Walters joked, "Oh no, not this prick to hold us up for another five minutes!"

When batting orders are collapsing, the silence as two batsmen sit removing their equipment, while another three hastily put theirs on, is literally sickening

In the 2013-14 Ashes, this idea of inevitability was given an almost scientific patina. Clarke kept reminding his players that their momentum could not be allowed to cease. If they flagged, and the boulder was turned, they knew what could happen: the instructive memory was of the August Test match in Durham, where Stuart Broad's spell on the fourth day set the boulder rolling over the Australian middle order. The game is never static. If it's not going forward, it's going backwards. The Australians, of course, were motivated by the carrot of winning the Ashes and then winning them 5-0; equally, they found motivation in the stick, the fear that if their momentum was stopped, it could come back and steamroll them. Perhaps paradoxically, it was the belief in momentum that staved off complacency.

But both teams, it was clear, believed in the momentum theory. During the Perth Test match, Graeme Swann was telling his brother Alec that he would rather have been with him in Northampton watching the band Shed Seven. Swann was not the only English player who no longer wanted to be in Australia. Jonathan Trott had gone. Matt Prior and Kevin Pietersen were at odds over many things but seemed to share one wish, which was to get away from Australian cricketers and Australian crowds. They were playing as if overwhelmed by some stupefying physical force. There were times when England dug in. But always, it felt as if there were some underlying force, a tilt in the playing field. The shared belief in Australia's momentum meant that the English fightbacks were only pauses in the narrative, and the Englishmen knew it. They might hold that boulder up, but they could not stop it rolling and they certainly could not push it back up the hill.

Australians had noticed this phenomenon elsewhere. In the most sophisticated of the local codes, Australian Rules football, there had been a shift in recent years towards massively one-sided games and periods within games. The speed of play in all the Australian football codes had increased, which made it harder and harder for the losing team to reverse the flow. While Test cricket had not become faster in over rates (far from it), during the back-to-back Ashes series events seemed to move faster and faster within the teams' minds. By the last Test match in Sydney, the boulder was rocketing along. At tea time on the third afternoon, Australia needed seven wickets to win the match. Rarely do so many wickets fall in one session, yet there was never a shadow of a doubt that Australia would take them. Four fell in the first ten minutes. They needed not a session but an hour. So comprehensive was the rout, so irresistible the boulder, that if a sixth Test had been played, Australia might have won it within two days.