Indian idol: a year into his retirement, Brand Tendulkar lives on

Tendulkar's autobiography comes across as a banal exercise in branding. Until one catches glimpses of a champion's rage

In his freewheeling autobiography El Diego, Maradona compared his captaincy of Argentina to that of his feisty predecessor Daniel Passarella. "He'd been a good captain, yes, and I always said so. But I was the one who displaced him: the great captain, the true great captain, was, is and always will be me."

It is a statement that, despite its obvious immodesty, does not feel incongruous in the least. Maradona, like Muhammad Ali, belonged to the order of champions who dominated their sport not only by their ability but also by their personalities. They were stars who naturally embraced a sense of destiny, assuming their place at the centre almost as if by birthright. Two contemporary equivalents of Maradona and Ali - minus the political edge in our age of corporatised sport - are Cristiano Ronaldo and Virat Kohli, both of whom are a compelling fusion of narcissism, vanity and cocky self-belief.

But there is a second order of champions, the likes of Sachin Tendulkar and Lionel Messi, whose public life is a sort of deception. Their chronic shyness and apparent humility become so entwined with their public image that no interpretation of their sporting motivations that discounts those qualities seems possible. They are presented to us as regular guys who just happen to be ridiculously good at their sport. This rhetoric is so unrelenting it makes us forget entirely the private ego that is the fuel of all champions.

Tendulkar's life is a tale defined by virtues no one can argue against: humility, industriousness, devotion. Told another way: Tendulkar respects his elders, worships his vocation and loves his nation.

This modern Indian narrative of its greatest sporting icon is at once too neat and simplistic. Like all stories with elements of simplification, it suppresses; alternative narratives are sacrificed for the purpose of a larger fiction. Ed Smith once noted ruefully that Tendulkar had been "turned into a god… Perhaps he had no choice but to go along with what a billion people yearned for him to be. But I cannot avoid the feeling that the god has gradually displaced the man."

Tendulkar's autobiography gives us one comforting revelation: he remains, like all great champions, reassuringly narcissistic and self-absorbed

An autobiography at the end of a playing career often provides a revelatory catharsis. That was never a possibility with Tendulkar. Along with the already excessive deification, the recent burden of the Bharat Ratna further narrowed the possibility of him deviating from script in public life.

It is why Tendulkar's decision to release an autobiography seemed such an uncharacteristic step at first, at variance with his carefully manicured image. He has lent his weighty and significant voice to so little of purpose that it was mildly surprising to find that he would beat Rahul Dravid or Sourav Ganguly - his more articulate and vocal peers - in this regard. But to see the release of this autobiography as merely an individual action, a reticent icon opening up to an ever-adoring nation, would be a folly. More useful is to remember Mukul Kesavan's injunction that Tendulkar "isn't merely a great player; he is the greatest human brand in the history of Indian advertising".

Once you see Playing It My Way as not the autobiography of Tendulkar the cricketer but the latest tamasha of a corporate machine at the service of Brand Tendulkar, the book begins to make sense. Much like the mindless corporate blitzkrieg that greeted his 100th hundred, Playing It My Way is a monumental feat of banality, a public-relations exercise with the depth of a scorecard.

There is a disclaimer on the first page, sounding an early warning of what is to follow, and which perhaps defeats the purpose of an autobiography. Tendulkar says he can't be fully candid because: "There are bound to be issues that can't be written about for one reason or another, events that are too personal or perhaps too sensitive."

How does one then read Playing It My Way, a book that is little more than a collection of skeletal descriptions of tour after tour? Is there any point in reading it at all?

After a few dozen pages, it became clear to me that the only way to retrieve anything from hours of unenlightening tedium was to indulge in resistant reading. That is, to read the text against itself. It was to pose oneself a challenge: can a banal autobiography - banal even by the standards of sanitised accounts of modern sports stars that are sold as bare-it-all confessions - reveal anything about Tendulkar the sportsman? I began reading the autobiography in terms of omissions, nudges and winks, alert to the moments where Tendulkar reveals himself in spite of himself. If one paid attention to the whispers, maybe the suppressed and alternative histories lost in the legend of Saint Tendulkar would once again come to light? No mystery spin: the book has steered clear of aspects Tendulkar deemed "too personal" or "too sensitive" © AFP

The outward personalities of champions can be a hindrance when it comes to understanding their essence. Diverse characters give sport a more colourful tapestry, but that sometimes masks what they all share, their common sporting DNA. Tendulkar's autobiography gives us one comforting revelation: Tendulkar remains, like all great champions, reassuringly narcissistic and self-absorbed.

Recounting the epic 2001 Test series against Australia, Tendulkar has nothing to say about how the win, a pivotal event in modern Indian cricket, shaped the course of the national team for years to come.

Dwelling on the 2002 tour of England, he barely notes Dravid's outstanding performance that summer, when he superseded Tendulkar as India's premier Test batsman. Writing about the Test at The Oval, Tendulkar devotes one line to Dravid's 217. It is followed by three pages describing his own batting.

They are among the rare parts in the book where Tendulkar reveals the minutiae of his craft: his improvisation at the crease; reading Muttiah Muralitharan and Shoaib Akhtar; his jousts with journeymen who caused him problems, like Dion Nash and Pedro Collins. But it also leaves us with the impression that the world is a footnote in the Life and Times of Sachin Tendulkar.

Tendulkar's self-absorption is not to be viewed with judgement but the understanding that egoism and an unshakeable idea of personal destiny are the sine qua non of every sporting champion. In Tendulkar's case, the point needs to be reiterated because in the fog of his public image, we have forgotten something essential about Tendulkar the champion, something that unites him with champions across the ages.

In the weeks leading to the autobiography's release, animated news bulletins reported Tendulkar's outburst against Greg Chappell. The former India coach was, in a sense, low-hanging fruit; the chorus-like agreement that followed from players who suffered under his divisive reign was almost predictable.

For Tendulkar and Richards, a challenge to their authority is not a minor transgression. Should an upstart have intruded, it was imperative to make clear who was in charge

Much more interesting is how Tendulkar converted a seemingly harmless exchange of pleasantries with another Chappell - Ian - into a dressing-down. At this meeting in 2010, Tendulkar responds to a compliment by reminding Chappell of his rather less congratulatory remarks following the 2007 World Cup. "I also said that critics like him change with the wind," Tendulkar writes. "When the going is good, they write positive things and when the going gets tough, they start making a lot of negative comments…" Tendulkar's harangue stunned his personal trainer, who told him "that I was the last person he had expected to lash out like this".

The exchange is fascinating because it allows us to see beyond the Buddha-like detachment and sage-like disposition that Tendulkar seems permanently condemned to. The tone may be a world away from Maradona's constant personal war in El Diego, but the underlying content is similar: Tendulkar bears a grudge like all champions whose ego is trampled upon, even if his response is generally more discreet.

There are other times, too, when the mask slips, though not often enough. Consider his thoughts on his famous duel with Henry Olonga in 1998. "…Olonga had taken me by surprise in the last match of the group stage with a short ball and the manner of the dismissal had kept me restless right up to the final. So much so that I decided I had to settle the scores. It was like in boxing - either you go down or I go down."

When I read this section, I was reminded of an excerpt in Viv Richards' autobiography Sir Vivian, where he described a brush with Devon Malcolm on a tour of England. "He had taken my wicket twice already in the series, hence the hype in the English papers, and like all of us, he had his day. My response was, when it was my day, Devon was going to pay."

When you read those passages again, and deprive them of context, the two could be swapped and they would not sound a false note. For Tendulkar and Richards, and champions of their pedigree, the challenge to their authority is not a minor transgression; it is a revolt against the natural order of things. Should an upstart dare to intrude, it was imperative to make unambiguously clear who was in charge.

No narrative is ever total, not even an autobiography whose main purpose is the Brand reinforcing the Deity, and it is looking through the cracks that we can occasionally glimpse Tendulkar with other knights of modern sport - Ali, Maradona, Richards - in whose company he deservedly belongs. It is a reminder, though fitful and occasional: behind the Brand and the Deity, there was once a raging champion.

Vaibhav Sharma is a writer based in New Delhi 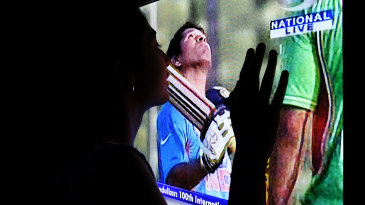 Playing it My Way

The mask behind Tendulkar's mask

His autobiography merely endorses the public image of the man, instead of giving us the insights we've been craving Sachin Tendulkar's relative silence on the fixing episodes are a wasted chance to inspire, inform and instruct